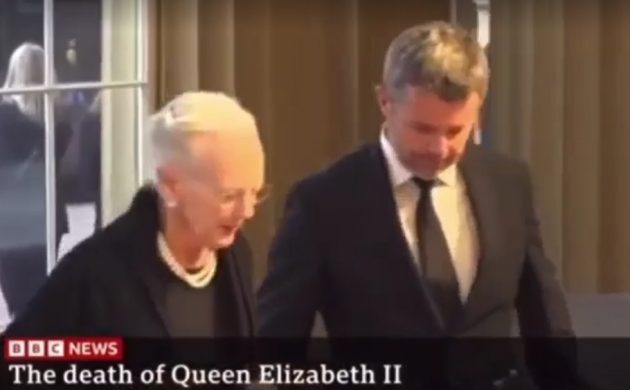 Here they come: the Queen of Holland with her dashing young husband (photo: screenshot)
September 20th, 2022 2:50 pm| by Ben Hamilton

A decade ago, the Los Angeles Times had to publish an apology after mixing up Danish and Dutch – its seventh such mistake in just two years (see factbox below).

“A March 9 op-ed about the erosion of free-speech protections referred to a controversy over 2005 cartoons that satirised the prophet Mohammed,” read the correction. “Those cartoons were Danish, not Dutch.”

Most international residents in Denmark experience the same every time they return to their homelands.

“So you live in Denmark; how’s your Dutch coming along?” they’re asked.

Cougar queen
But you would expect the BBC, given that the British broadcaster is only located 800 km away, would know the difference between Denmark and the Netherlands by now. Well, at the funeral of Queen Elizabeth II, the answer was a big resounding no.

Not only did the commentator identify Danish Queen Margrethe II as the “queen of Holland”, but she described her son and heir, Crown Prince Frederik, as her husband, “the king of Holland”. And to make matters even worse, she phrased them as king and queen. See the video here.

It was the second blunder to hit the Danish Royal House, which shortly before the funeral learned it could only send two guests, not three as was previously indicated in the invitation and then announced to the Danish media. This meant Crown Princess Mary had to stay home.

The BBC embarrassment, meanwhile, follows a BBC News auto-subtitle cock-up that reported British Queen Consort Camilla would not be a ‘Queen Regina’ (a ruling queen), but mis-spelt regina as vagina.

How the LA Times set the standard

– In a review of an opera ‘Anna Nicole’ in February 2011, soprano Eva-Maria Westbroek was described as Danish. Westbroek is Dutch.

– A September 2010 piece made a reference to a 1950s-era wooden monkey by Dutch designer Kay Bojesen. Bojesen was Danish.

– An article in November 2009 said that actor Viggo Mortensen is from Dutch parentage. No, he’s not.

– An article in September 2009 about a bicycle shop said they sell Danish bikes. No they don’t.

– An article in December 2006 misidentified the newspaper behind the Mohammed cartoons as Dutch. Wrong again.

– An article in October 2006 about the premiere of a documentary about Karen Blixen described her as Dutch. No, although Meryl Streep is of Dutch descent.