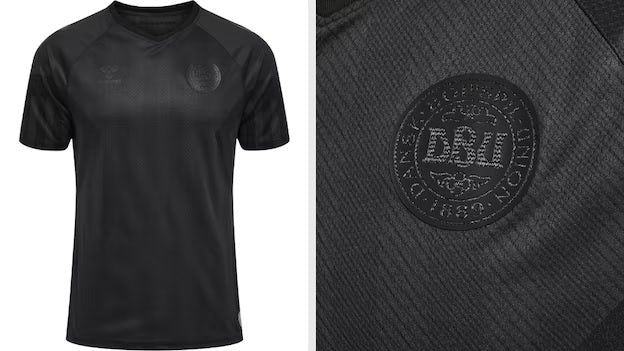 Qatari citizens have signalled out Denmark for their condemnation following the news that the national football team’s kit manufacturer Hummel has designed monochromatic shirts for the 2022 World Cup that pay tribute to the migrant workers who died during the construction of the stadia.

“This shirt carries with it a message. We don’t wish to be visible during a tournament that has cost thousands of people their lives. We support the Danish national team all the way, but that isn’t the same as supporting Qatar as a host nation,” explained Hummel.

The Guardian claims that more than 6,500 migrant workers from the likes of India, Pakistan, Nepal, Bangladesh and Sri Lanka have died in Qatar working on the country’s stadia – a number often cited by Danish media.

Hummel accused of trivialising Qatar’s commitment
In response, the WC organisers (the Supreme Committee for Delivery & Legacy) rejected the gesture.

“We whole-heartedly reject the trivialising of our genuine commitment to protect the health and safety of the 30,000 workers who built FIFA World Cup stadia and other tournament projects,” it said.

“That same commitment now extends to 150,000 workers across various tournament services and 40,000 workers in the hospitality sector.”

Denmark hauled over the coals
Qatari daily Al-Sharq is also indignant, questioning: “Does Denmark have a humanist and human rights record that allows it to criticise other nations and gives examples in that domain?” The answer is unfortunately no, with a bold font, because Denmark has one of the worst records on human rights according to many international reports.”

Under the hashtag #Denmark National Team is not Welcome, Qataris have accused Denmark of mistreating its own migrant population, disrespecting Islam and Muslims (with some citing the 2005-06 Cartoon Crisis as proof), and violating human (and animal … digging up the ‘bestiality is legal’ claims) rights).

A few have called for a ban on the Danish team entering Qatar, others have recommended legal action, and some have even accused the UAE and Bahrain of orchestrating a campaign to distort the image of Qatar.

Tearing the country’s human rights record to shreds
Under the hashtag, journalist Dr Elham Bader Al-Sada wrote on Twitter: “Denmark has one of the highest rates of femicide in Europe. Hate crimes related to race or religion rose 27 percent between 2020 and 2021.”

“Syrian refugees in Denmark are suffering there and consider it an unsafe country,” wrote a second Twitter user, while another penned: “History will not forget your occupation of African and Asia countries, killing their people and using them as your slaves. So shut your mouth – you’re not welcome to Qatar.”

Rasha, who is Stockholm-based, wrote on Twitter: “It is hard to believe Denmark’s humanitarian concern. To remind you: humanist Denmark deports Syrian refugees to Rwanda. Hostility towards foreigners increased 27 percent during 2021. During the 2018 World Cup in Russia, which took place after the Russian bloody massacres in Syria, we did not hear any objections from Europe.”

NATO wants Denmark to move quicker with pledge to increase defence spending
NATO has warned Denmark that it needs to increase its defence spending to 2 percent of its GDP – the level recommended by NATO and prominent members such as the US – at a quicker rate than is currently planned, which is by 2033. Sweden has stolen a march on its neighbours by confirming it should reach 2 percent by 2026 – Swedish PM Ulf Kristersson said it was vital in light of ongoing events in Ukraine – and NATO thinks Denmark should learn from its example. “Denmark needs to further speed up investments in defence if it is to succeed in implementing all the objectives of NATO capabilities as well as fulfilling the national ambitions in the field of defence,” it noted. In 2023, Denmark will spend 1.39 percent of its GDP on defence.

Foreign Ministry begins defence against Syrian children lawsuit
A case has started at Copenhagen Court today in which the association Repatriate the Children is suing the Danish Foreign Ministry for electing to evacuate three Danish children from the al-Roj prison camp in Syria, but not their two mothers, who instead have been stripped of their Danish citizenship. The court must decide whether the decision violated the children’s right to a family life. A further two Danish children currently residing in al-Roj are not represented by Repatriate the Children.

Denmark on alert following multiple drone sightings in Norway
Security has been stepped up at Danish airports in response to the suspicious drone activity in Norway of late. The airspace above airports in Stavanger and Haugesund was closed on October 15  after drones were observed. Several Russians have been arrested, including a Brazilian suspected of being a Russian spy, and charged with flying a drone within 5 km of a Norwegian airport, although it has been illegal since the invasion of Ukraine on February 24 for any Russian national to operate a drone in the country. Drone activity involving Russians in Sweden ended with arrests in late January.

California’s Danish festival makes post-pandemic return with three maids
The Danish Days Festival in the Californian town of Solvang was recently held for the first time since 2019. The three-day event (September 16-18) featured food, music and an arena for axe throwing. Each year the festival elects a Danish Maid, but this year three Danish Maids were celebrated – for 2020, 2021 and 2022. The festival traditionally honors the establishment of Solvang by Danish-Americans in 1911, and this year’s edition was the festival’s 85th.

Immigration Service reviewing family reunification rejections
Family reunification case decisions since May 2015 are now under review. Following a ruling by the European Court of Justice earlier this year, the Danish Immigration Service is busy contacting applicants whose bid for a residency permit, to be together with family already present in Denmark, was turned down. The ruling most particularly relates to rejected non-EU citizens who share parental responsibility for a minor with a Dane. The extent of the child’s dependency on the rejected parent will be carefully assessed, promised the Danish Immigration Service.

Kofod questions whether Iran should face sanctions for drone role
Jeppe Kofod, the foreign minister, has said that Russia’s use of Iranian-produced kamikaze drones should have consequences for the Middle Eastern country. “Iranian drones are being used to attack in the middle of Kyiv. This is an atrocity we must address,” he said ahead of a meeting of the EU foreign ministers in Luxembourg on October 17. “I want targeted sanctions against the people in Iran who are responsible for supplying the drones used in Ukraine. We again see the drones used against the civilian population.”

Greenlander’s gruesome murder trial set for late November
A 28-year-old man will stand trial for murder at Qaasuitsoq District Court in Greenland from November 21-24 in connection with the gruesome discovery of dismembered body parts in Ilulissat last October. The remains of the victim were in the vicinity of an incinerator. Two other arrests were made in connection with the discovery  – a man and a woman – but both were quickly released without charge.

Prospect of wind energy in Vietnam attracts Danish investors
Crown Prince Frederik and Crown Princess Mary will travel to Vietnam for an official state visit next week as part of an industry delegation. More than half of the 35 Danish business executives expected to travel with the pair work in the wind energy industry. Representatives of three investment funds are expected to be there: the Danish government’s IFU, Copenhagen Infrastructure Partners and EKF. Denmark is one of the five biggest foreign investors in Vietnam. And Vietnam’s commitment to reducing net emissions is attracting more and more Danish investors.

Denmark criticises Russia for taking part in Olympic Committee meeting
At the recent general meeting of the Association of Olympic Committees (ANOC) in South Korea, Hans Natorp, the chair of the Danish Sport Confederation (DIF), criticised Russia’s participation. Eleven of the 206 participating countries expressed their concern about the presence of the Russian Olympic Committee at the general assembly. However, Thomas Bach, the president of the International Olympic Committee, did not agree with the criticism and said that the majority must be respected in the decision. According to Bach, politics should not take over sport and, since it was only a minority of countries expressing their concern, there would be no need for action.

China’s arctic influence in Greenland apparently smaller than assumed
More than five years ago, Beijing announced its Arctic strategy and plan to establish a ‘Polar Silk Road’ under its Belt and Road Initiative. Despite assumptions and fears from Denmark and the United States that China was constantly increasing its influence in the Artic region and especially in Greenland, China’s influence is apparently not as strong as assumed. Chinese migrant workers in Greenland’s fishing industry are the only Chinese presence at the moment, with their total number estimated at around 50. Further Chinese mining and infrastructure projects have been put on hold. You can read more about it here (in English).

Three years in prison for Syrian man guilty of money smuggling
A Danish court has sentenced a 29-year-old Syrian man to three years in prison for smuggling 74 million kroner into Sweden on multiple journeys. It is believed that every time he crossed the Øresund Bridge, he smuggled around 2 million kroner. The origin of the money is not known. The man later confessed to the crime.

Denmark setting the standards for loss and damage compensation
Looking ahead towards COP27, where it remains unclear who will represent Denmark, the country has been receiving praise as the first to ever offer ‘loss and damage’ compensation to the most climate vulnerable regions of the world: around 100 million kroner. “It is grossly unfair that the world’s poorest should suffer the most from the consequences of climate change to which they have contributed the least,” the Danish development minister, Flemming Møller Mortensen, stated when announcing the funds.