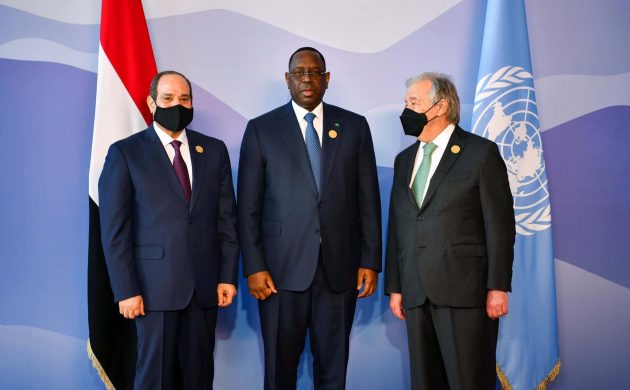 For long so silent, the developed world is finally listening to the likes of Senegalese President Macky Sall
November 21st, 2022 8:59 am| by Ben Hamilton

Ahead of the 2022 UN Climate Change Conference hosted by Egypt in Sharm El Sheikh from November 7-18, the example set by Denmark and Scotland – with their pledges to donate ‘Loss and Damage’ funds to the developing countries most affected by climate change – was always going to play heavily on the delegates’ minds.

And on Sunday, COP27 organisers could inform the world that Global Environment Facility funds, which the target the climate adaptation needs of low-lying and low-income countries, are in place thanks to Denmark and Scotland, with support from fellow historical polluters Sweden, Finland, Germany, Ireland, Slovenia, Switzerland and the Walloon Region of Belgium. It is part of a new five-year work program to promote climate technology solutions in developing countries.

In total, there is 105.6 million US dollars in funding, but surely it is just the beginning, ensuring Sharm El Sheikh will go down in history as the climate summit where developed countries finally listened to the argumentation of bodies such as the Alliance of Small Island States.

Trailblazing work
Denmark might not be a green superpower, but its heroics in the build-up to COP27, and then at the summit itself, underline its status as a green trailblazer.

This was the biggest ever Danish participation at a summit, with over 300 individuals and more than 24 Danish companies and organisations in attendance – including the likes of State of Green, COWI and Dansk Industri.

Loss and Damage financing was part of the COP Agenda for the first time ever. The agreement means that many developed nations are finally ready to move on from promises to meaningful action. There is now a clear roadmap ahead that Denmark has played a large role in drawing.

“We have determined a way forward on a decades-long conversation on funding for Loss and Damage – deliberating over how we address the impacts on communities whose lives and livelihoods have been ruined by the very worst impacts of climate change.”

A ‘transitional committee’ will now make recommendations on how to carry out the new funding arrangements ahead of further agreement at COP28 next year. It will first meet in March 2023.

COP27 also resulted in the countries present reaffirming their commitment to limit the average global temperature rising by 1.5 degrees Celsius above pre-industrial levels, more commitments to cut greenhouse gas emissions and further adaptation to the impacts of climate change.

READ MORE: How Egypt helped to ensure COP27 would go down in history