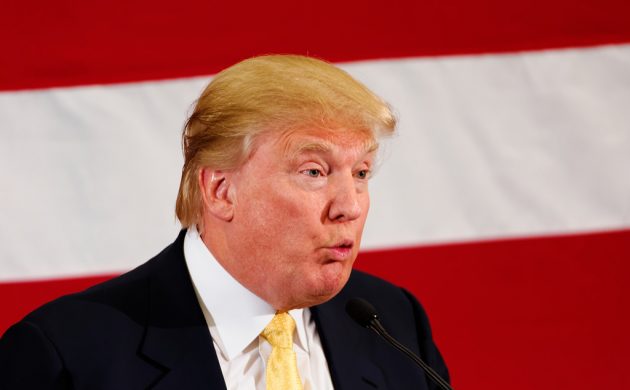 Just when you thought you’d had enough of Trump’s tweets!

You thought you could relax and enjoy a saccharine-soaked, hyggelig Danish festive period, but then along comes this year’s Crazy Christmas Cabaret, ‘Planet Rump, The Farce Awakens, episode 35’, which includes all of these topics and many more.

From teasing Mrs T …
Episode 35 refers to the fact that this year is my 35th Crazy Christmas show. Episode 1 was performed in a studio theatre to an audience of 50 bewildered Danes who had to be taught to shout “BOO” at the baddies.

In those days I revelled in making fun of Margaret Thatcher and Mikhail Gorbachev. In my Crazy version of Orwell’s ‘1984’, entitled ‘Big Sis is Watching You’, Mrs T was the head of the Thought Police and having a political love affair with Mikael Gorbachev (remember him? Birthmark on the head, Perestroika etc).

“Gorbie”, she articulated. “How can we have peace and harmony between our countries with two such different social systems?”

“It is simple Maggie,” he replied, drawing her attention to how there was a cage at Moscow Zoo containing a lamb and a wolf. “You see, there are two social systems living in peace and harmony,” he said, before adding: “It is simple – we put in a new lamb every morning.”

… to kneeing Donald T
Back in the 1980s, when I put pen to paper to write that Crazy Christmas show, my portrayal of Thatcher as the Iron Lady was reviewed as cutting edge satire, but today when I put fingers to keyboard to write this year’s show, I find myself overwhelmed with targets for my satirical arrows, and that’s only when I’m aiming at Trump’s hair!

From Aristophanes onwards, satire has always existed in the comedy toolbox, but today it is an essential for every comedy writer. It is our only way of dealing with the madness that unfolds on a daily basis from our so-called leaders.

More than ever, we need to laugh at the follies that are thrust on us by the powerful or else we will cry or, worse, shrug our shoulders in resignation and give up on any kind of opposition.

In this age of iniquity
Ever since the future president of the United States was heard saying he could walk up to any woman he liked and “grab her by the pussy”, the gates have opened for comedians to use all the tools at their disposal and every platform they can find to use irony and ridicule to expose and denounce powerful people who seem to be out of control.

So at Tivoli this winter you can see what happens when a galaxy, which is far too close for comfort, is threatened by a huge orange planet and its president Ronald Rump.

And remember, whatever happens between now and the end of 2017: “May the hygge be with you!”