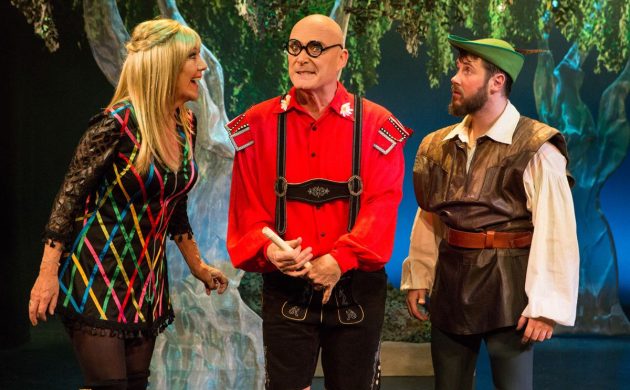 Where else were we going to encounter German accents as funny as David Bateson’s? (photo: London Toast Theatre)
January 28th, 2018 6:00 am| by Vivienne McKee

You’re going to do an English panto here in Denmark? Well don’t expect us to shout ‘Hooray’ and ‘Boo’. Danes are far too shy.”

Everyone said this to me when I started the Crazy Christmas Show 35 years ago. And the audiences were indeed astonished to see ‘the fourth wall’ crumble in front of their eyes and actors inviting them to come onstage and take part in the action. But gradually, over the years, they embraced the craziness and have come in ever-increasing numbers.

Determined decision
By my 25-year anniversary show, I was being told that I was an “institution in Denmark”. It takes a long time to get recognition in this country, but it was even more incredible because the London Toast Theatre performs in English and I am a non-Dane. The audiences, or ‘toasties’, now bring three generations of family to the shows and Facebook has ensured that their reviews are more significant for our success than any newspaper or critic’s star-rating.

This year, after our opening night, I announced that it would be the last Crazy Christmas Show. I have been busy writing, directing and acting in the show for 35 years and my creative energy is harnessed, not just during the four-month rehearsal and performance period, but over the whole year. I wanted to accept fresh challenges here and abroad.

Rebel-rousing reaction
The storm that hit following this announcement was, to say the least, overwhelming. Within minutes of it going public, we were dealing with a tsunami of messages, emails and comments on Facebook, including: “Don’t leave us”, “Save Christmas”, and “Take this to a government level – this is our core welfare!”

I remained firm in my decision, believing the storm would soon pass and we could disappear gracefully into theatre memorabilia. But this was not to be. And soon whole audiences were chanting “One More Year” at the end of the show.

One fellow even asked if he could propose to his girlfriend at the show because she was an ardent fan and was distraught at our news. Such a proposal, he claimed, would be a family memory forever.

Reluctant resolution
People came up to me and said: “You can’t imagine how much we will miss you. It’s become a tradition.” And that is the key to it. The Danes are reserved compared to other nationalities and rarely show passion for anything – but they will fight to keep their traditions intact, whether it is Fastelavn, Skt Hans Aften and the one thing more important that hygge: ‘Julehygge’. And my crazy English show is now considered a part of that special Christmas season.

People come to the magical Julemarket and, after schnapps and sild, they enter Glassalen Theatre and smile as actors come over and chat to them and encourage them to join in the fun. During the show, they lustily shout “Hooray” and “Boo” at the top of their voices with grannie and the kids.

So, after 35 years, as an almost integrated Dane, I bow to tradition and Crazy Christmas will go on. Godt Nyt År and may the hygge be with you in 2018!