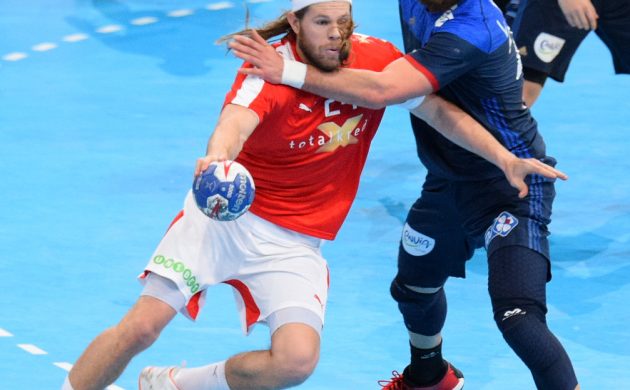 Everyone knows that Chinese warlord Ying Zheng invented football in the third century BC. Legend has it that he kicked his rival’s severed head into the paddy area and a passing peasant accidentally sat on it – it’s where we get the expression “on the head, mate” from.

We also concur that the ape in ‘2001: A Space Odyssey’ invented cricket. And really, that goes for any sport invented by the English (nobody overly disputes that the Scots invented golf, although they were too drunk to remember exactly who) and the Danish, apparently.

Handball, it would appear, was invented in ancient times. Ariadne’s thread got caught up into a ball, and she threw it at her saviour Theseus, who promptly caught it – it’s where we get the word ‘save’ from.

Other games involving a round object being caught, which today are claimed as early versions of handball, were contested in medieval France (holding the basket under the guillotine) and among the Inuits (snowballs?). By the time a game of similar ilk caught on in the late 19th century in several countries – including Germany (torball), the Czech Republic (házená), Ukraine (handbol), and Norway, Sweden and Denmark (håndbold) – they were merely retreading old ground.

“No, I said crap shot”
Nevertheless, nobody can deny that Colonel Holger Nielsen – who gave up on his dreams to become a doctor aged 15, instead joining the army where he excelled in artillery and fitness, before working as a gym teacher at Ordrup Latin og Real School, just north of Copenhagen – was the first to draw up a set of rules, one of several accomplishments over an extraordinary life that began in Copenhagen in 1866 and lasted nearly a century.

Other highlights included three medals in the inaugural 1896 Olympic Games in Athens and developing a form of external cardiopulmonary resuscitation in 1932, a method to restart breathing through the manipulation of the shoulder blades, which was eventually superseded by mouth-to-mouth resuscitation two decades later.

You’d be forgiven for thinking Nielsen – who competed in the fencing, shooting and discus in Athens – merely invented a sport to suit his good aim and penchant for throwing things, but in reality he was an accomplished fencer (who won bronze in the sabre) coaxed into taking part in the other sports to make up the numbers.

The record books might show he won two shooting medals, but with only seven nations competing – host nation Greece provided 50 of the 61 marksmen, scooping 60 percent of the silverware – the standard was woefully low. In finishing second in the free pistol competition, his score of 285 was well short of the winner’s 442 total, while the rapid-fire 25-metre event (in which he came third) only had four competitors, of which one failed to finish.

Striking a balance
After completing his first draft in 1898 – inspired by a school playing field not big enough for football – Nielsen spent eight years finessing the rules until he published them in the 1906 book ‘Vejledning i Håndbold’, and by 1919 – with the help of several Germans taking time out from the trenches – they had pretty much metamorphosed into the rules of the modern game we know today.

The first ever game had pitted Nielsen’s Ordrup against a school from Helsingør in 1907, which Ordup won 21-0. The opposing coach, Lieutenant Rasmus Nicolaj Ernst Petersen (1872-1937), blamed the differences in the rules observed by the sides, and he had good reason to feel aggrieved. Since 1897, he had been promoting his own version of the game – first at the Nyborg school he taught at in Funen, and then in Helsingør.

As the sport expanded from the schools, the early conditions were tough. While it was mostly played outside at first, in the cities it quickly developed into a popular indoor sport that could be played during the winter. Some venues were known for having iron brackets protruding into the wings, while others had particularly hard floors and players quickly adapted to shooting from distance. It was common to find handball at an army barracks and it is noticeable that most of today’s leading clubs are based in cities that had one.

Fortunately the first ever international men’s contest, between Germany and Belgium in 1925, was a slightly closer affair than the schools’ game, and Germany then played Austria in the first women’s game in 1930 – just two years after females were finally allowed to compete in some of the vigorous sports at the Olympics (more genteel disciplines such as croquet were permitted in 1924), the same year in which the sport’s first significant body, the International Amateur Handball Federation, was founded.

European domination
Six years later, the outdoor version of handball (played by eleven players) made its bow at the summer games in Berlin, although it would not return to the Olympic fold for another 36 years – waiting for Germany to host them again – in 1972 in Munich as an indoor sport. The women were admitted in 1976 (19 years after getting their own world championship).

The first men’s world championship (for indoor teams composed of seven players) had been organised in 1938, with the Scandinavian countries initially dominating the sport in the 1950s, before the Eastern Bloc took over in the 1960s, with Romania taking four of the five titles contested between 1961 and 1974.

Those nations shared the men’s medals at the first three Olympics, only yielding to the west during the boycott, although Romania, the only Eastern Bloc nation to turn up in LA, scooped the bronze. To this date, after 12 Olympics, a team featuring Russia has won four golds. Nevertheless, other countries have flourished, with Sweden making three finals at the end of the last century, and France contesting the last three, although their bid for a hat-trick was thwarted by the Danes picking up their first gold in 2016.

Russia also leads the way in the women’s competition, featuring in three gold-winning teams – a feat matched only by Denmark, which won three on the trot between 1996 and 2004. The first of these was under Ulrik Wilbek, who stepped down when his team were reigning European, world and Olympic champions. A slightly less successful spell with the men’s team followed from 2005-14, during which the team won two European crowns. South Korea have made the most Olympic women’s finals, with five, but only won twice: in 1988 and 2002.

While the Olympics remain the pinnacle, the men’s and women’s teams contest a major championship every year: alternating European and world championships (initially every three or four years, to fit in with the Euros it became biennial in 1995) in December and January.

While the Danish women have won all three major tournaments, the men are yet to win a world’s, so it is with extra incentive that they are currently chasing the title – and on home soil, co-hosting with Germany. The bookies rank them as favourites to end a drought that has seen them take two silvers and one bronze in the last six tournaments.

It’s not bad for a nation of 5.8 million people, given that the International Handball Federation now has 166 member federations, but the colonel won’t be satisfied until they’ve completed the set.