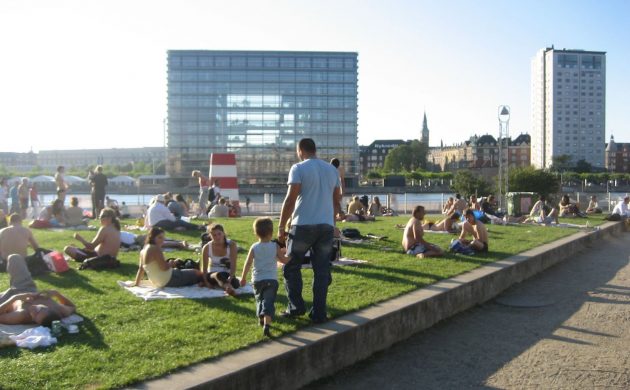 Since April 25, the Copenhagen Police has temporarily prohibited citizens from being at the waterfront area of the Islands Brygge due to people flocking to the popular hangout in the recent spell of good weather.

The ban pertains to remaining in the specific area, but not driving, walking or running through the area.

Citizens face a 2,500-kroner fine and penalties will be higher in repeat cases. The ban is valid until midnight on May 1. However, the period may be extended.

Covid-19 ‘hotspots’
The police stated that they could issue more bans in selected areas where there have been sightings of increased gatherings.

Some 38 locations across the country have been listed as ‘hotspots’ by the police.

Father of three in custody and expelled from Denmark for killing his wife
The 39-year-old Pakistani citizen Kamran Khan has been found guilty and expelled from Denmark for beating his 34-year-old wife to death back in October 2018 in Osted near Roskilde. In a unanimous verdict, the man’s actions were described as “totally unmotivated violence” and allegedly motivated by jealousy and a violent obsession. Aside from facing permanent expulsion from Denmark, Khan has also been denied the right to inherit from his ethnic Danish wife or receive any benefits from her death, according to Ekstra Bladet.

Doctor sentenced for gross negligence in meningitis case
A doctor at Herlev Hospital has plead guilty to failing to adequately treat the 16-year-old, Mathias Baadsgaard-Lund, who died of meningitis back in 2016. The doctor plead guilty to gross negligence and faces either a 5,000-kroner fine or imprisonment for up to four months. The doctor was charged for failing to take necessary actions for urgent treatment.

Teen stabbed to death in Gentofte brawl
Two teenagers, aged 15 and 17, are being held in custody for the killing of an 18-year-old male on Saturday night in Gentofte. The teens allegedly stabbed the 18-year-old during a mass fight, in which a dozen or so youngsters aged 13 to 19 participated in at a parking lot in Gentofte. The following day, six people were called into court in Helsingør, with four being released again. Both the 15-year-old and the 17-year-old were tried in absentia as they are both hospitalised with injuries. Several of those arrested had been wounded, although none are in critical condition. The police told DR that the two teens will remain in custody until May 7.

Danes smash hot air balloon record
Thanks to airlines being grounded due to the Coronavirus Crisis, two Danish air balloon pilots have set an unofficial national record for the highest elevation reached by a hot air balloon. On April 22, Philip Mundt and Thomas Jøhnk rose to 8,253 meters in elevation. The pair told TV2 that they were permitted to fly so high as the Danish airspace has been almost empty lately due to the coronavirus. The Danish official record registered in 1980 was 5,696 meters. The world record for the highest hot air balloon flight is 21,027 meters.