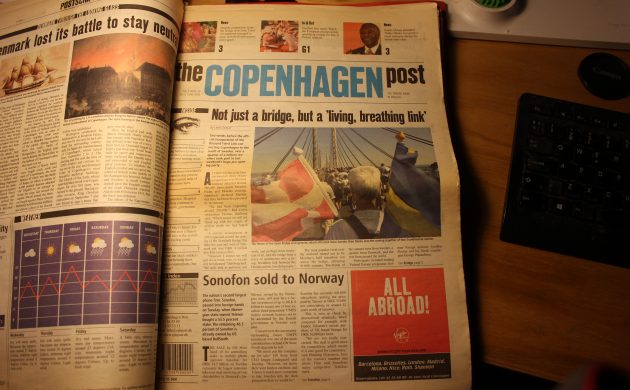 The Copenhagen Post reported on the opening of the Øresund Bridge 20 years ago
July 1st, 2020 3:37 pm| by Ayee Macaraig

A mini-concert, a film and special lighting are just some of the ways Denmark and Sweden are celebrating the 20th anniversary of the Øresund Bridge on Wednesday – a symbol of the Danish-Swedish connection.

It has been exactly 20 years since Queen Margrethe II and Sweden’s King Carl Gustaf inaugurated the bridge that connects Copenhagen and Malmö, building commercial and cultural ties between the Scandinavian neighbours over 15.9 km of steel and concrete.

“Thousands of people on their way to school, work and leisure – around the clock, year round. A pulsating stream over the Øresund. A constant exchange of goods, labour, culture, knowledge and inspiration. We are connected and we always will be,” said Øresundsbro Konsortiet in a statement to mark the anniversary.

Lukas Graham playing
Wednesday’s events include a mini-concert with pop band Lukas Graham by one of the bridge’s pylons. It will be broadcast live at 8pm on the bridge’s website and Facebook page.

Organisers are also launching an anniversary film to pay tribute to the people of the region. It will be available here.

Pontoon lights will be switched on every evening from July 1 to 5, which organisers promise to be more energy-efficient and attractive than the original pylon lighting.

History and culture
The Øresund Bridge was built primarily as a regional connection between Denmark and Sweden, driving the growth of housing, business and labour markets on both sides of the Sound.

– Denmark and Sweden signed an agreement to build the bridge in 1991, but it was only in 2000 that the project opened.

– About 32,100 cars passed over the bridge per day in the summer of 2019, breaking a traffic record. Traffic is expected to increase by 1,000 cars a day when the Fehmarnbelt link is complete.

– Solar panels are installed at the bridge’s payment facility.

– An artificial island named Peberholm links the bridge and tunnel sections. It has become a breeding ground for 30 species of birds – many of which are rare and protected.

– The Øresund Bridge famously appeared in the Nordic noir crime television series ‘The Bridge’ in which a dead body was found on it. The show offered a glimpse of Denmark and Sweden’s landscapes and cultures.