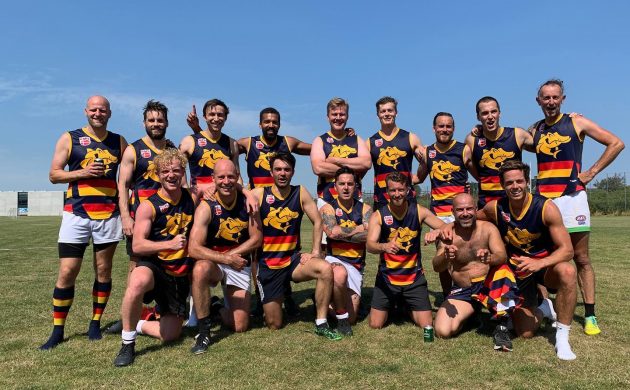 Our author (bottom row, middle) is the central figure in the Barracudas’ revival … or at least in this photo (all photos: Michael Jensen @foto-jensen)
September 5th, 2020 5:00 am| by Davie McCurdie

I’m standing in the middle – as is customary after a win – of a circle, alongside my fellow victorious first-gamers, mouthing the words to our club song. There’s me, in my first ever competitive game of any form, rubbing shoulders with players who’ve played this sport at its highest, professional level.

We don’t know the words to the song; our more experienced teammates forming the ring that surrounds us keep it going and spray us with their drink bottles. There may even be beer in there. 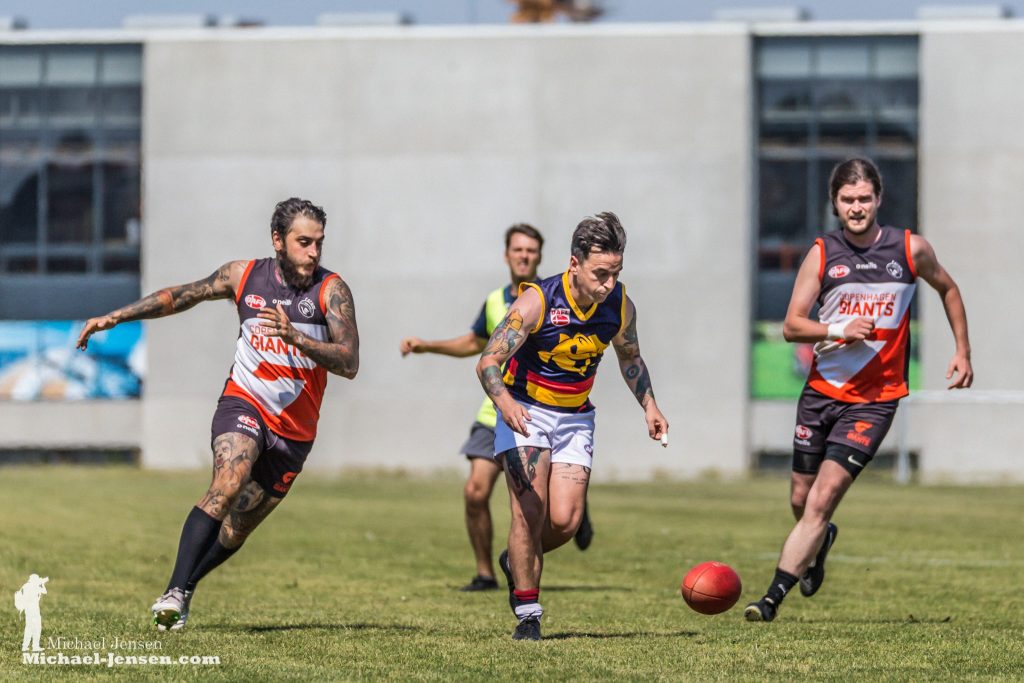 Rooted and rebooted
Moments earlier, the Copenhagen Barracudas had triumphantly made their return after a year-long hiatus to the Danish Australian Football League with an opening day derby win over the Copenhagen Giants. Aussie rules football is back on the menu in Covid-era Denmark and Copenhagen’s pre-eminent club is risen.

That the Cudas have re-entered the scene is welcome news to followers of the game in Denmark and beyond. As a founding member of the DAFL, the Barracudas (then named North Copenhagen Barracudas) won the inaugural Premiership in 1991 contested by just three sides – all of which were based in the capital.

The competition now enjoys something of a cult following, with clubs all over the country in the likes of Aalborg, Aarhus, Odense and Farum. A Malmö outfit completes a league of seven teams made up, perhaps surprisingly, by mostly local players peppered with Australian expats with a firm grounding in their nation’s biggest sport.

League rules seek to limit the over-reliance on Australian players by way of a quota system, thus encouraging clubs to look for local talent. 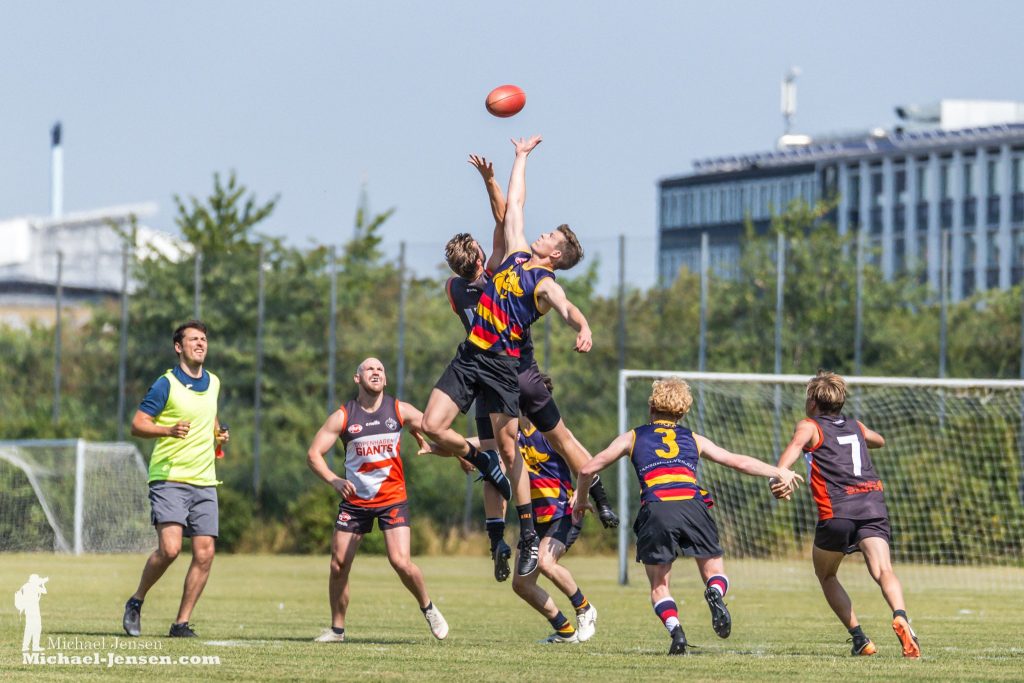 Cudas to the coach
For myself – more of a long-time listener, first-time caller – I have been welcomed into the fold by a diverse playing group and senior coach, Atiba Jackson, whose positivity and passion for coaching far outshines previous experiences of gritty football coaches on rain-sodden pitches in Scotland, barking orders at nervy youngsters, fearful of missing that crucial slide tackle.

Jackson, a native of Melbourne who has been playing football for as long as he could walk, has rediscovered his love for the game with the Cudas. “Footy is the best part of my week,” he says. “We have such a great group around the club, and with 20-30 people training every week, it’s awesome to be able to introduce new players to the game.”

A typical Cudas training session sees players hone the unique skills of the sport. From learning to kick and catch the game’s often unpredictable oval-shaped ball, working on the art of handballing and playing a range of games, there’s a strong focus on development and fun for players of all levels. 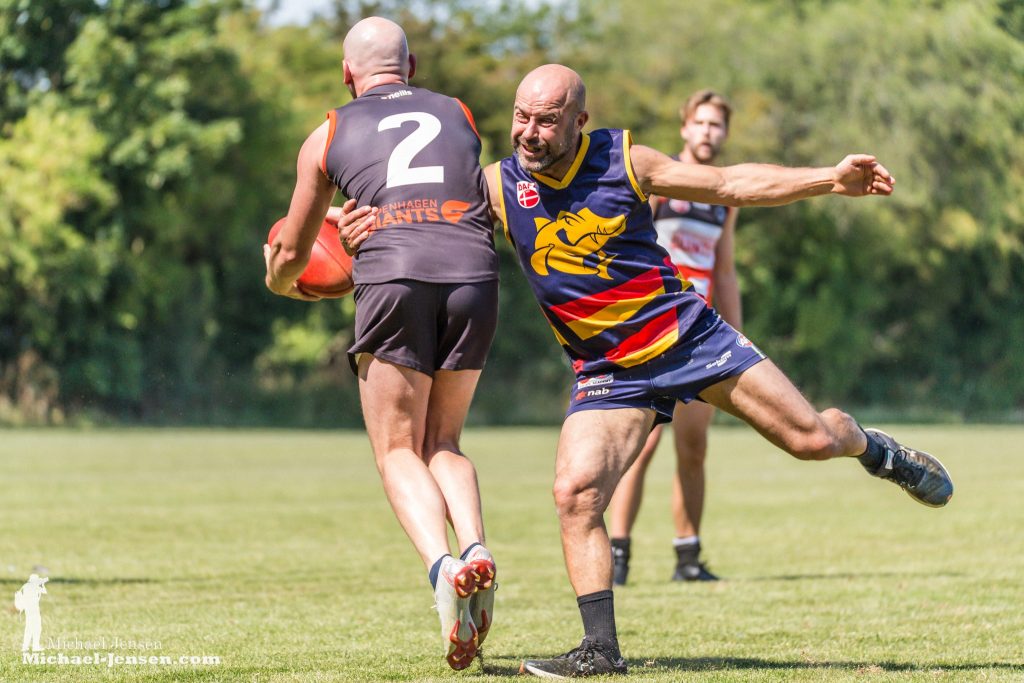 Plans for sheilas team
The need for a non-Australian core playing group is underlined by Jason Nunn, the club president: “Being based in Copenhagen is a blessing, as we inherit a lot of players from Australia to study or work. The flipside to this, though, is that they typically don’t stay long, so we’re in a perpetual state of recruiting new players year on year. We really felt this last year when we pulled out of the 2019 DAFL season because we couldn’t field a team.”

These challenges are familiar to amateur sporting institutions the world over, but for a niche sport, the work in keeping a club going and getting players to training and on the park is never done. “We’d love to have more Danes come and learn the game: both for the longevity of the club and competition but also to create more awareness in Denmark for our favourite sport,” says Nunn.

This invitation certainly doesn’t extend only to men. The club has big expansion plans into the women’s game.  “We’re building a strong base for a women’s team here,” contends Nunn. “There’s a small but dedicated group training regularly and it’s our objective to get them playing some actual matches and help in the running of the club. We need to find more women to help realise that dream, start the team and really grow women’s footy in Denmark.” 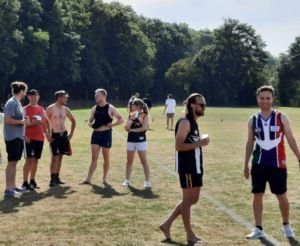 Beaut social life
The foundation of the Cudas’ 2020 revival has been built on the social endeavours of the club, with weekly post-training barbecues and regular social events in the calendar.

“We’ve been able to cultivate a great, inclusive social environment where everyone has a voice and working together is as important as the footy,” adds Jackson.

For as much as the club has placed a strong emphasis on the social aspect, there’s a serious and deeply competitive edge to the Danish game, as is guaranteed to be the case this weekend as the Barracudas head to Malmö to take on the Maulers, followed by the short trip north to meet the 2019 Premiers, the Farum Cats, a week later in Round 3.

The Cudas, high from their victory last week, are ready to taste more success. 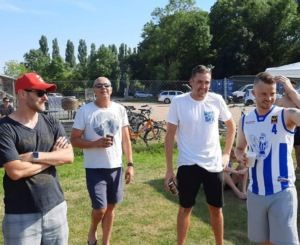 Cobbers in the circle
Round 1 and back in the circle, I’ve almost nailed the tune and the words of the club anthem. The arm of a guy who as recently as a year ago was on the playing list of an AFL club is around my shoulder.

He’s playing at a level he hasn’t seen since he was a boy; I’m barely treading water in a game I’ve followed avidly for some time, but only acted out in back gardens and locked-down living rooms. But we are one. We are equals here, bound together in victory.

The journey is beginning for me and a good few others. It is resurrected for a number of players frustrated to not have a team to turn out for last year. And for this decorated club, in its navy, red and gold guernsey, a new history is being written by the current crop.

Not content with merely notching up the fielding of a team this year as a success, there’s a buzz about the club and optimistic chatter of a return to the glory days of yore reverberates around the footy shed. The season to come will doubtless deliver many a twist and turn, but ask anyone in that circle if we can go all the way to the finals this year and you’ll be met with the same answer, which just so happens – I have now learned – to be the refrain from the club anthem: “Cudas can!” 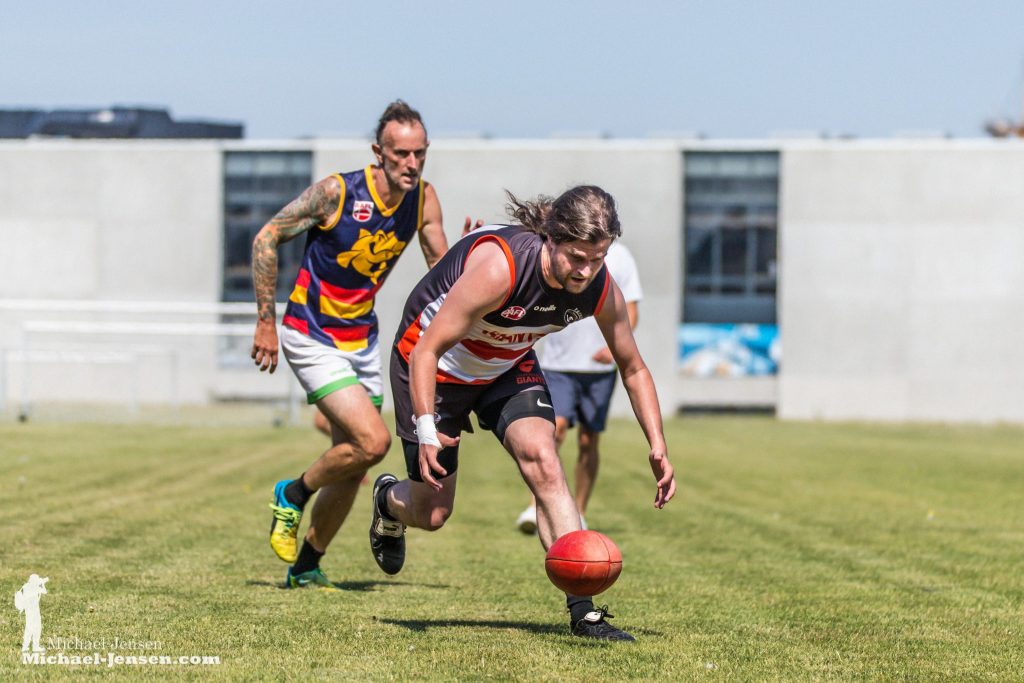 Come and meet the Cudas!

Copenhagen Barracudas train on Tuesdays (18:00-20:00) at Valbyparken (meet at Hammelstrupvej 48)

New members of all ages and genders are always welcome

The club hopes to launch a women’s team next year

Find out more at cphaf.dk