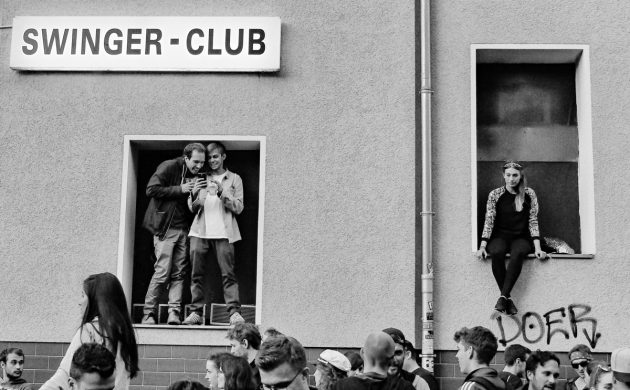 Looks like these two have found the reportage on Spotify (photo: Juan Gómez/Flickr)
May 28th, 2021 12:14 pm| by Puck Wagemaker

“Aaaah, hmmm, can you tell me what you’re seeing now?” asks Radio4 journalist Louise Fischer while moaning. ‘‘I see a delicious woman who is fucking me good.”

Yes, you read that right. Fischer had sex with her interviewee. It might sound strange, but while reporting on the reopening of a swinger’s club in Ishøj, Fischer thought it made sense to go all the way and interview swingers while she was having sex.

According to her the swingers wouldn’t have had let go as much as she wanted them to, if she had just interviewed them at the bar and watched.

“The swinger scene is very closed environment,” Fischer told Jyllands-Posten. “I knew before I came that I would not get the full insight, but I should at least create a kind of trust and credibility between me and them.”

And so she did. By after asking the swingers what they usually do in the club in Ishøj, she was offered the chance to try it herself and have sex.

Surprising, cool, and ‘great respect’
Prior to the recording, Fischer’s executives had given her the green light, but it was her own decision. “They thought it was [a] fresh [angle], and they fully trusted that I only did what I wanted and could invent myself,” she said.

With Fischer as a participative actor, the executives thought it was a good way to obtain entry into an otherwise closed world, as well as a surprising reportage. “I think it’s cool when our reporters experiment with making journalism in a different way,” Radio4 program chef Tina Kragelund told Jyllands-Posten.

Fischer says she has mostly only received positive responses to her swinger reportage.

Curious about the reportage? Listen to it here (starts around 40:00).