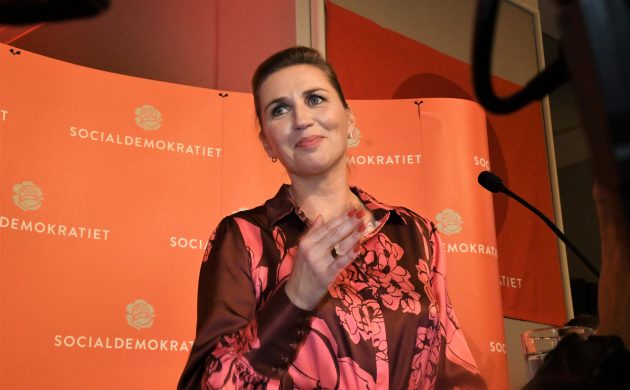 Enhedslisten political spokesperson Mai Villadsen has urged PM Mette Frederiksen to not go outside the Red Bloc in her quest to form a new government.

Following the results, she conceded to DR that she finds it difficult to see any common ground between her party and Lars Løkke Rasmussen’s new party Moderaterne.

Tactical voting on the left
“We must turn up the heat in the upcoming negotiations, because they will be really decisive for our country,” she said.

Explaining her party’s disappointing performance, in which it went from 13 mandates in 2019 to nine, Villadsen suspects a lot of Left Bloc voters switched tactically from Enhedslisten to Alternativet to ensure the latter ended up with representation.

Enhedslisten does not have a leader, so Villadsen is the closest thing they’ve got.

Konservative leader insists he will not step down
Søren Pape Poulsen has insisted he won’t step down despite a disastrous campaign, less than 12 months after his party emerged triumphant from the local and regional elections with 16 percent of the national vote. Despite polling at that share in early September, Konservative ended up with just 5.5 percent – ten mandates. Nevertheless, compared to 2019, Konservative slipped just 1.1 percentage points and lost two mandates. Despite insistence from some quarters of the media that his divorce, announced on September 14, would not affect his campaign, he lost immediate support from voters in the week that followed.

“We’re still standing,” proclaims DF leader after getting just enough
Dansk Folkeparti leader Morten Messerschmidt last night quoted Elton John to tell media: “We’re still standing”. DF will have just four mandates, but it could have been a lot worse, with many pundits tipping them to fall below the 2 percent threshold. In the end, the party won 2.6 percent of the vote. “DF has existed for 27 years and not every year has been like cycling with a tailwind,” he said. “We will fight tirelessly for our important causes, regardless of how many mandates we have.”

Pia Kjærsgaard could lose her seat in what used to be a stronghold
The figures reveal that Dansk Folkeparti has taken another hammering in Zealand’s Storkreds, a traditional stronghold. In 2015, it won 134,195 in the constituency, where founder Pia Kjærsgaard always stands, but this fell to 56,697 in 2019 and 22,354 this year, earning it just one mandate. This means that either Kjærsgaard or deputy chair René Christensen will lose their seat.

Dogfights looming for Venstre and Radikale as their support is halved
Among the dogfights for seats currently ongoing in the Greater Copenhagen Constituency, Venstre has a feisty one in which Jan E Jørgensen, Martin Geertsen and Linea Søgaard-Lidell are all in the hunt for the same seat. Not to be outdone, Radikale has a four-way battle between Samira Nawa, Klaus Bondam, Ruben Kidde and Carolina Magdalena Maier. Both parties have lost close to half their mandates.

Venstre still optimistic they can win the day
Optimist of the night award must go to Venstre political spokesperson Sophie Løhde who suggested Moderaterne leader Lars Løkke Rasmussen must join the Blue Bloc and forget about forming a government down the centre. And then on top of that, she said Venstre leader Jacob Ellemann-Jensen should still be PM.

Fourteen stood and two failed to win mandates
Neither Frie Grønne nor Kristendemokraterne won enough votes to obtain representation. The former previously had four MPs, and the latter none. In total, the parties respectively won 0.9 and 0.5 of the vote – a total of 50,265 votes. A further 4,241 votes were lost to spoiled or blank ballot sheets, or alternative candidates, meaning 54,506 votes were wasted in this election.

Biggest spenders on Facebook were Liberal Alliance
Liberal Alliance – which had an outstanding election, raising its number of mandates from four in 2019 to 14 with 7.9 percent of the vote – spent 2.6 million kroner on Facebook advertising during the campaign. It was the most by any party. The funds were chiefly spent on promoting the profiles of the party and its leader Alex Vansplagh. Socialdemokratiet and Konservative were the next two biggest spenders with 1.13 and 1.09 million respectively. In last place, Frie Grønne spent just 29,166 kroner, while absolutely nothing was spent on boosting the profile of Moderaterne leader Lars Løkke Rasmussen.

Crucial times today ahead of negotiations beginning
Two crucial times on the schedule today. At 11:00, PM Mette Frederiksen will meet the Queen and announce the resignation of the government. And then between 11.00 and 12.30, Publicistklubben will hold its traditional meetings with all the leaders of the parties that have won representation. The event will be held at Industriens Hus in Copenhagen and be televised on DR.

Greenland goes with Red Bloc
As expected, Greenland handed its two mandates to the Red Bloc. The representatives are Aki-Mathilda Høegh-Dam from Siumut and Aaja Chemnitz from Inuit Ataqatigiits.