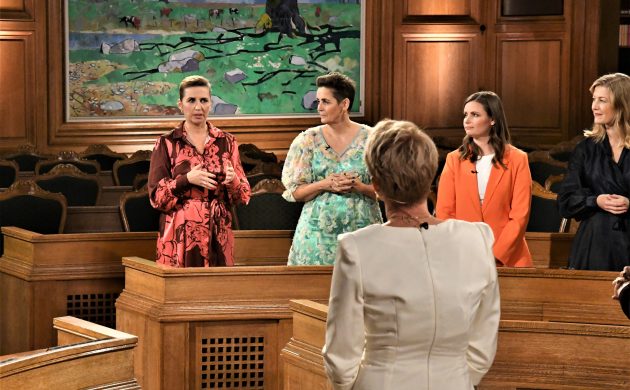 Never doubt the will of Danish women to succeed in politics! (photo: Hasse Ferrold)
November 16th, 2022 11:04 am| by Sam Clem-Whiting

The recent elections represented a historic moment for women’s representation in Danish politics, with the 44 percent share of elected women in Parliament exceeding 40 percent for the first time.

However, this is most probably the result of women’s sheer force of will in a society that continues to stack the deck against them, claims a new study.

Why so (un)serious
It’s not only blatant sexism and hate speech online that reinforces voters’ biases and prejudices. It is also the little differences in the ways male and female candidates are talked about that, repeated thousands of times over, undermine the seriousness of female candidates.

It’s things like referring to women by their given name instead of their surname or focusing on superficial attributes unrelated to their political qualifications.

“We see a clear trend where female politicians are more frequently referred to only by their first name and are also more often described in relation to their body, clothes or family relationships,” said one of the researchers involved in the study, Isabelle Augenstein.

“Prejudices and stereotypical perceptions of men and women that shape the way we evaluate both genders pervade the internet and shape the information our voters are presented with.”

A damning assessment
In total, the researchers at Copenhagen analysed 10 million comments about male and female politicians across 312 different countries using statistical algorithms. They found that because of how common unprofessional discourse about female politicians is, the underlying AI of the internet elevates such sexist discourse.

“It is a feedback loop. Gender stereotypes and prejudices in society are included in digitised literature on the web, in articles and in people’s comments on social media. These digital footprints then help shape the automated models and algorithms that prioritise the internet’s content for us. And in that way, the circle is closed,” said Augustine.

Engineering great engineers
For the sixth year in a row, US News and World Report has named Aalborg University the best engineering school in Europe, and 11th best worldwide in its recently published ‘Best Global Universities’ rankings. The assessment considers 12 indicators, measuring academic research results, international cooperation, and reputation at home and abroad.

Breast cancer revelations
In the 1980s, breast-conserving and removal surgery was thought to be equally safe and effective. A new study conducted by researchers from Aarhus, Gentofte and Naples reviewed 30 studies comparing survival rates worldwide since 2010 – an overall segment size of 1.3 million patients. The researchers found that breast conservation surgery leads to survival rates increasing by a third compared to removal surgeries, while the tumor is relatively small.

Wastewater in Ghana
Researchers at Roskilde University will embark on a three-year project to create better wastewater solutions in Ghana. The researchers will work closely with public and private entities in Ghana to better understand the social and political landscape. This nuanced approach will take place first in Tema. Should the research prove successful, the solutions can be implemented in cities across Ghana.

Robotic surgery
Surgeons at Rigshospitalet have successfully completed three kidney transplants with a robot-controlled joystick. Early findings from similar procedures conducted elsewhere seem to indicate that robotic surgeries often create less bleeding. Andreas Røder, the head doctor at Rigshospitalet, emphasised more studies must be done to justify the value of the practice. “Robots are both expensive to acquire and maintain,” he commented.

Two birds
Amid an energy crisis and on the brink of climate disaster, researchers at the University of Southern Denmark (SDU) have developed technology that may address both challenges. They have found a way to transform CO2 into green gas. The technology has the potential to be implemented in one of the biggest polluters, Aalborg Portland, which emits 2,300,000 tonnes of CO2 every year. A large-scale demo plant is set to be implemented before the end of the year. Additionally, the plant provides a means to better store other renewable energies, support energy supplies and reduce reliance on harmful emissions.

Drone on
Researchers at SDU have successfully created drones able to transport blood samples across distances, without risk of collision with manned crafts in their shared air space. It is the first time this has been accomplished in Europe. Public and private firms will now look to advance the implications of transport drones.

Anonymous recruiting
To combat the biases and make the hiring process fairer, DTU is trialing a new tool that seeks to anonymise the recruitment process. “We have developed a tool that anonymises and automates the initial part of recruitment, called shortlisting. With our tool, the hiring manager is told nothing about the applicant’s name, age or appearance. All that remains is to find out how the applicant matches the specific job criteria,” explained Sara Shafiee, the co-founder of the startup DivERS, who is a researcher at DTU.