Divided loyalties at the 2022 World Cup: Oi, oi, oi! Katie and Kenneth about to turn up the volume

When Denmark play Australia today, there will be more than a few shrimp on the World Cup banter barbie for the Petersen family 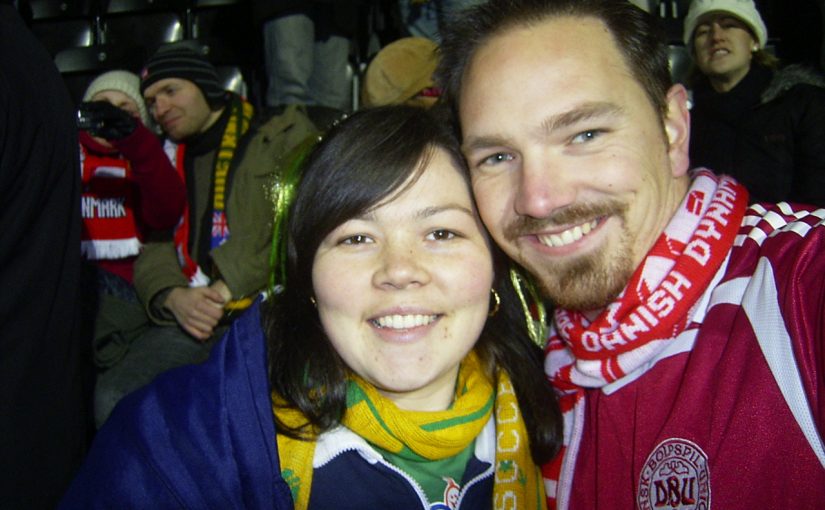 Smiles before the storm: Kenneth and Katie will be at odds for 90 minutes later on

The 2022 World Cup is going to be one of a kind on so many levels. In Qatar, the best national football teams will have the opportunity to prove they have the greatest talents in the world.

Denmark is one of 32 teams hoping to reach the final on December 18. But while they’re an outsider to go all the way, they are strongly fancied to emerge from a group that also contains Tunisia, France and Australia in the group stage.

Pledge of allegiance
There is always an added element of excitement for the mixed nationality families. More specifically, it is those who have family ties with at least two of the contenders.

The rivalry can be jovial, mischievous or volatile – sometimes all at the same time. With national pride at stake, even children are not off limits when it comes to securing allegiances.

Mothers against sons, fathers at war with their daughters, and Farmor jeering Morfar, our living rooms become warzones.

Let the banter flow!
We caught up with three families in Denmark who face this very predicament: having links to Denmark and either Tunisia, France or Australia.

From Australian meat pies to French foie gras and Tunisian couscous, nothing was sacred among the banter ahead of the 2022 World Cup.

Here we go again! Drawn together in the same group in 2018, Australia and Denmark will once again face each other in a World Cup group game: but crucially, this time around, in the final game.

A matter of birthrights
Danish-born Kenneth Petersen has shared his life with Katie, a native of Australia, since 2000. But despite spending a fair chunk of his childhood in Australia, he is 100 percent behind the Danes.

Katie is likewise all in with Australia, despite living in Denmark for 14 years. Her heroes are Tim Cahill and Harry Kewell, two of the stars when the Socceroos and their golden generation reached the final 16 in 2006.

Their three kids are more or less 50/50, so the atmosphere during the game will surely be very intense.

Unlikely to suit both
In 2018, the game finished in a 1-1 draw, leaving both sides with a hope of qualifying for the next round from the final game.

This time around, the game will be more decisive, so there’s no room for sentiment. May the best team win!

Do you intend to watch the game together?
Katie: Definitely. We will be happy either way if Australia wins or loses. But you never know, it’s football, anything can happen.

Who will be the most vocal during the game?
Kenneth: It will be interesting because in the last World Cup, Australia was also in the same group as Denmark. We saw the game together and I was really surprised by Katie’s volume, so I kind of stepped back a bit. She was cheering a lot, shouting and getting very excited about it all.

Who do you think is the favourite between the two teams?
Kenneth: I think we have one of the best squads we’ve had in a long time. We have a really good chance of getting very far and that puts a lot of pressure on the team. It will be interesting to see how it will go, whereas Australia has almost no expectations. Nobody thought they would qualify. They will do the best they can, and if they get anything that will be really great for them.

There’s a bit of a split in the family in terms of allegiance. How does it play out at home?
Katie: I think the kids will support Denmark because they grew up here. But they also have Aussie flags.

Kenneth: We went to Australia several times; they really like the country so it will be 50/50 I think.

What’s more likely to happen on game day? A cold Tuborg or Australian meat pies?
Katie: Some Aussie stuff, like pies or lamington. It’s like what Americans do for the Superbowl, for example.

Who will be the most upset by a loss?
Kenneth: That would absolutely be me. If you look at the group, the game against Australia we absolutely have to win. We would be super crushed if we lost that game.

What do you think the final score will be?
Katie: I’m gonna say 3-1 to Australia.