Elsewhere, another team of researchers are investigating whether a greener Arctic could spell further doom for our planet 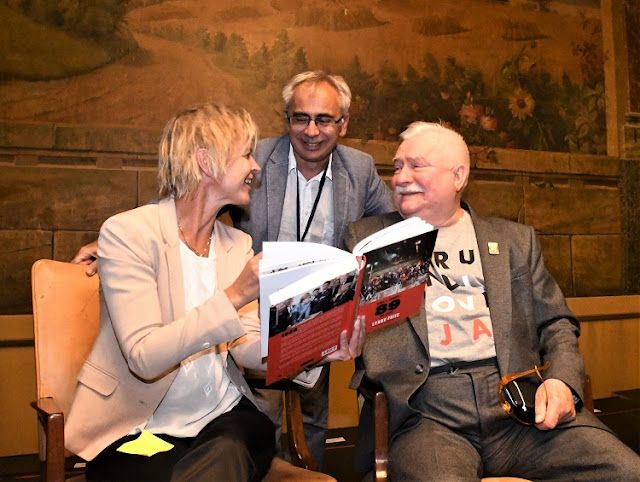 Surely Solidarity started with this guy, Lech Wałęsa (right), pictured on a visit to Copenhagen in 2019 (photo: Hasse Ferrold)

In a recent study, researchers at Copenhagen Business School established a tangible connection between how people behave in their daily lives and their solidarity with those suffering tragedy.

Take, for example, the world’s reaction to Russia’s invasion of Ukraine. Across the globe, sympathy moved people to raise a flag that was not theirs to support the plight of a country thousands of miles away.

It’s intuitive that solidarity with those suffering can have other, even more meaningful, effects on how people behave. The researcher sought to define and document this kind of solidarity.

How is solidarity created?
“We are the first researchers to have investigated and defined what solidarity with a place like Ukraine really is,” explained CBS professor Alexander Josiassen.

“We have documented that solidarity actually exists, and we have measured that compassion and sympathy have an effect in practice.”

The researchers defined the phenomenon as “an individual’s compassion and sympathy with a place, as a result of an observation of relative suffering”.

A greater inclination to be hospitable
The surveys that informed the study took place in the USA, but the tendencies studied are basic enough to be applicable in Europe or elsewhere, ventured Josiassen.

Among the findings, the surveys showed that people have a higher willingness to pay for air travel that does not rely on Russian energy, a greater desire to visit afflicted countries, and an inclination to show a higher degree of hospitality for Ukrainian tourists.

Companies, countries and NGOs may now use a simple eight-question survey, compared against other similar surveys, using a program called AMOS 28 to measure people’s inclination to act on the solidarity they feel with a particular situation or cause.

CBS professor awarded prestigious grant
An associate professor at Copenhagen Business School has been awarded a 15 million kroner grant from a European research council to investigate data loss. Over the next five years, Nanna Bonde Thylstrup’s project ‘DALOSS’ will aim to learn more about what it means when data disappears and what personal and ethical decisions may be involved. “When we hear about data loss, it is often in connection with spectacular cases, such as Elon Musk buying Twitter,” explained Thylstrup. “But what actually happens when we press delete. On the one hand, there is this narrative that the internet never forgets, and on the other hand, we actively lose and delete data every day. And in both cases there are both feelings of security but also of risks.”

Cleaning the capital’s water
Last year, some citizens living in Korsør were found to have high levels of fluorine substances (PFOs) in their blood. The Capital Region has 50 purification plants that pump up contaminated water, whose efficacy is being examined this year. So far, 32 plants have been examined, and the finding is generally favourable. It has been found that carbon filters, a technology already widely used, are perhaps the best tool the plants have in combating harmful PFAs and PFOs.

Study: How our brain train signaller likes to take breaks
Researchers at the University of Copenhagen have landed themselves on the front page of the respected science publication ‘Nature’ with their new hugely important discovery about mammals’ brains. They discovered that a specific enzyme connecting brain signals turns randomly on and off. It will sometimes even take hours-long breaks from its ‘work’. This discovery not only changes how we think about the brain but may prove hugely significant in developing new medicines.

Study: How a greener Arctic could accelerate global warming
A team of international researchers, including some from the University of Copenhagen, has taken a closer look at how vegetation growing in Arctic regions affects warming. The team relied on data taken from 64 Arctic locations from 1924 to 2021. “Theoretically, it has long been known that the plants on the earth’s surface help to heat an area because they absorb the sun’s radiation. In the new study, we confirm that theory through real measurements and show a correlation between how much energy is absorbed on the surface and what type of plants grow there,” explained Professor Thomas Friborg. The findings will help improve current predictions and inform future climate action. There is a lot that is still unknown about how and why the world is warming, but studies like this one will help fill in those knowledge gaps so the world can be best prepared for future challenges.

Rebuilding Denmark’s ‘Small Barrier Reef‘
A project called ‘Super Reef’ in Denmark is underway to help re-establish 55 km of reef off the Danish coast – at many different locations, including in Copenhagen Harbour. The project enlists Danish engineers and artists to make the constructions effective and attractive to help bring attention to the issue. Over the last 100 years, 8.3 million cubic metres of Danish reef has been removed – at great cost to the surrounding ecosystems. ‘Super Reef,’ which was inaugurated by Crown Prince Frederik in 2021, is a relatively small step on the way to revitalising the ecosystems. Still, it may have a more significant impact on the attention it brings to the cause.

Research: Prolonging the shelf life of the food we eat
A team of researchers at the University of Southern Denmark are investigating how food rots – especially products containing Natamycin, which significantly extends a food’s shelf life. To better understand the process of food going bad is to potentially learn how to delay the process, which may have significant effects on food waste. So far, the researchers have found that Natamycin’s effectiveness deteriorates when exposed to light. Furthermore, it is not water-soluble, and fungal species may be becoming resistant since it is the only approved fungal medicine approved in many places. These discoveries can inspire minor behaviour changes and more extensive research projects in the service of reducing food waste.

Surge in burn victims linked to usage of bioethanol
Rigshospitalet has reported a surge in burn victims this autumn due to the improper use of flammable liquids such as bioethanol. Bioethanol is a highly flammable substance that can have devastating consequences if used without proper precaution. Rigshospitalet is urging caution when using such substances – a little bit can go a long way – and reminds people not to bring outdoor heat sources (such as patio heaters or grills) inside. One should also be sure that the fireplace is cold before flammable liquids are used.

Irish company wins CO2 capture and storage contract in Denmark
An Irish carbon capture and storage company, Kent, has won the contract for ‘Project Greensands’ in Denmark. Project Greensand works to capture, transport and store CO2, thereby reducing CO2 emissions . The project aims to provide between .045 and 1.45 million tonnes per annum of CO2 storage in the North Sea. It is expected to be completed by the end of 2025 or the beginning of 2026.