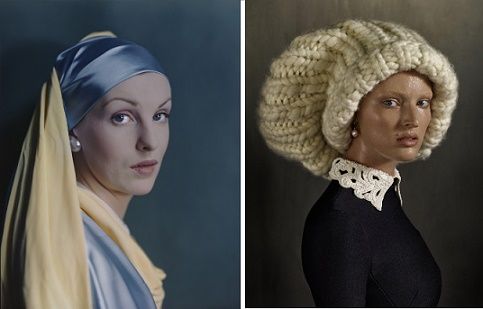 Seeing this new show comprised of enlarged photographs from the glossy fashion magazine Vogue triggered off a number of different trains of thought in my mind.

However, it was quickly apparent on examining the works on display that the art world had crossed over into the photographer’s studio. Some of the influences were blatantly obvious, such as the photographic recreation of Vermeer’s ‘Girl with a Pearl Earring’ by Erwin Blumenfeld from 1945.

On closer inspection, though, Blumenfeld’s picture has the model over in the left side of the picture looking out, whereas Vermeer’s girl is looking outward from the right, so it is not just a straight pastiche.

This motif crops up again, albeit in a rather ‘post-modernist ironic’ version by Erwind Olaf. Here, as in Bluemenfeld’s picture, the girl is over to the left of the picture looking out and seems to be wearing a giant cable knit hat that almost dwarfs her head. Is Olaf referencing Vermeer or Blumenfeld here? It is hard to say.

The exhibition’s first room contains a number of pictures that come under the theme of ‘portraiture’. Another obviously ‘art-like’ photo is ‘Carmen as Zurbaran’s Saint Elizabeth’ by Michael Thompson. Here, the lighting in the photo has been set up to give the shot an ‘old master’ look.

There is also a rather amusing updated parody of a typical aristocratic Gainsborough couple, but here one of the two figures is wearing a tulle skirt and the other lace-up wellingtons. With the dog between them on the floor, they are kitted out in outlandish hunting gear and both cradling guns, which gives the picture a slightly disquieting atmosphere.

A Napoleon complex
One of the standout pictures for me is William Klein’s black and white photo ‘Isabella and Napoleon’. On the face of it, the picture from 1963 shows a very serious-looking Napoleon in a drawing room with officers and ladies. However, you suddenly realise that the woman standing next to him (and dwarfing him) is wearing a white 60s dress and pumps and has what looks like a beehive hairdo, which slyly subverts the seriousness of the situation.

The renowned British fashion photographer Cecil Beaton is represented by several works. One of them, from the late 1940s, shows a group of ladies dressed in spectacular ball gowns in a Rococo-style drawing room. Beaton’s use of lighting is exisite; you can almost feel the draped material.

That photo is owned by Annie Liebowitz and she has used it to create her own version, but hers is set firmly in the 18th century. The drawing room is similar, but as well as the Beaton original there are also echoes of Hogarth’s ‘Rake’s Progress’, with a rather louche-looking gentlemen sprawled on a chair in the far left eyeing up the extravagantly-clad ladies draped around the room.

Jack the dripper
Modern art is also represented and has been transformed through the lenses of the Vogue photographers. In a photo from 1951, Beaton goes as far as placing one of his models in front of a typical Jackson Pollock splash picture. Unwittingly, perhaps, this shows how much the once-maverick Pollock had entered the mainstream by this time. In another picture, Beaton also shows a fondness for Matisse by using Matisse-like foliage cut-outs as part of the shot.

In another less-then-veiled nod to modernism, a very Edward Hopper-like atmosphere pervades the picture ‘A Single Woman’ shot by Camilla Atkins in 2010, which featured Kate Moss.

There is a lot more of course, but perhaps we ought to end with ‘Untitled’ by Edward Steichen from 1934. Steichen is considered the father of fashion photography, and it was he who was largely responsible for bringing an artist’s eye and sensibility to bear on the fledging magazine.

The picture here, though, has little to do with fashion; it is pure art photography. A seated female figure is seen from the waist up side-on with her hands clasped and partially obscuring her head. The two hands form an ‘L’ shape, with the fingers extending in different directions. It almost looks like something Man Ray could have created.