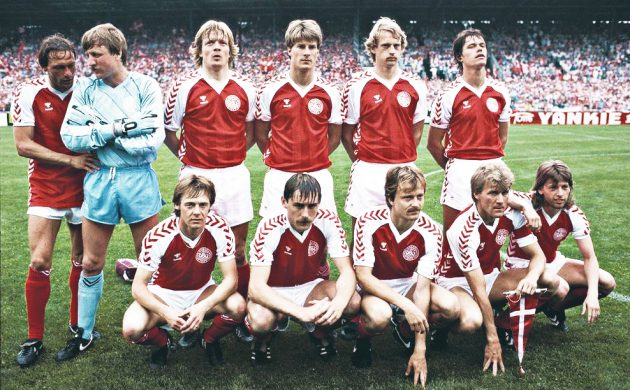 With the World Cup tantalisingly close now, a fever has enveloped the country for the first time since 2012. The Danes are back on the world football stage. From Hirsthals to Helsingør, the excitement is palpable.

After missing out on Euro 2016 and the 2014 World Cup, Christian Eriksen and company have brought pride and respect back to the Danish national team, and the fans are eager to see them perform well on the biggest stage of them all in Russia.

But while it’s been tough going recently, Denmark despite its small population has a decent footballing history brimful with iconic moments.

Politics parked
Most football fans probably remember the fairy-tale Danish triumph at Euro 92, the Danish Dynamite team of the 1986 World Cup, or even strong runs at the 1998 and 2002 World Cups. Proper old-schoolers might even remember the silver medal at the 1960 Olympic Games in Rome. 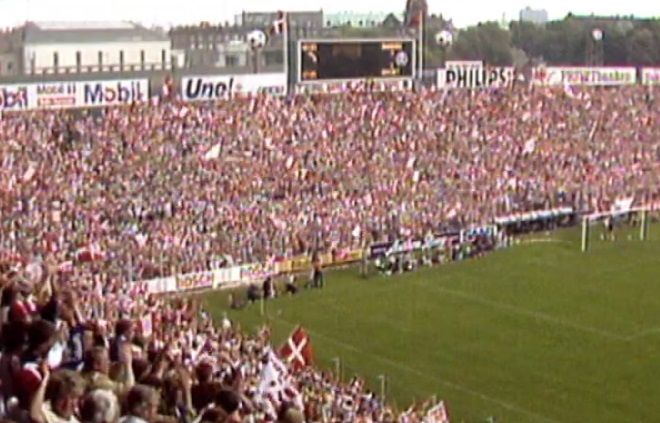 Aside from being a fantastic summer’s day, it was also Constitution Day – a day that has long been rooted in political rallies, speeches and manifesto unveilings.

Something special was afoot. People could sniff it in the air, like a bloodhound on the chase. Denmark’s football team was closing in on a remarkable culmination and no speech in the world was going to measure up to it.

Sepp Piontek had been hired as coach in 1979 and the German immediately realised there was too much ‘hygge’ in Danish football. He brought Teutonic discipline and professionalism to the table. And results.

The Danes were a penalty shootout from reaching the final of Euro 1984 and with the likes of Preben Elkjær, a young Michael Laudrup, Søren Lerby, Frank Arnesen, Jesper Olsen, Morten Olsen and Klaus Berggreen, the country knew it had the quality to qualify for its first ever World Cup in Mexico ‘86. 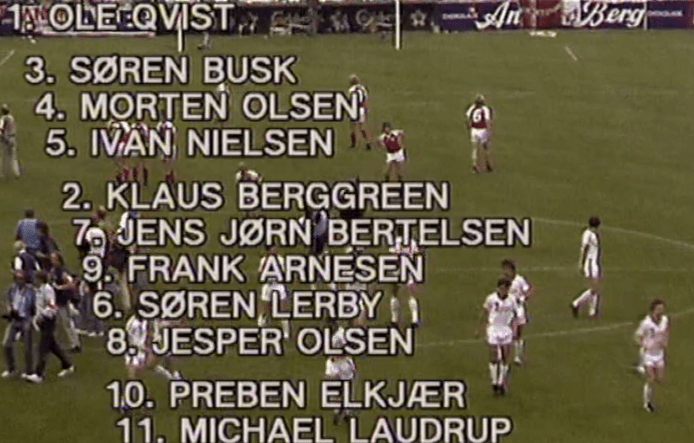 A bear of an opponent
They just needed to finish in the top two in their qualification group to make it, and a win against mighty Soviet Union would put them well on their way.

But the Soviets were no joke. They were among the very best sides, anchored by arguably the best keeper in the world at the time, Rinat Dasayev. Three years later they would reach the Euro 88 final and the Danes knew well that they had never beaten the Soviets before.

And there were other concerns as well. Serious concerns. Just one week before, 39 football fans were crushed to death in the Heysel Disaster and security organisers for the game were understandably wary of a similar situation taking place at the 75-year-old Idrætsparken Stadium – packed with over 45,000 raucous fans.

The main stand was numerically organised, but the rest of the stadium was ‘old school’ standing only, and as the game drew near and the fans began to pile in, security at the stadium deemed that something going wrong was a real possibility. Nevertheless, the party in the stands was unstoppable.

“I entered Idrætsparken several hours before and walked around the stadium to soak in that atmosphere. It was a magical day. It was as if everyone already knew something was about to happen,” Carsten Werge, then a budding journalist, said on the DR documentary ‘24 hours we’ll never forget’. 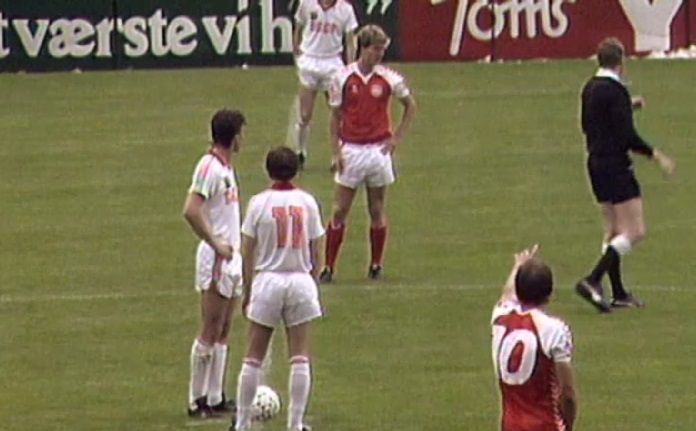 Intense introduction
From the off the Danes burst forward, jumping into tackles, battling tooth and nail. The fans demanded it. Sepp did too. And they were not about to fail to deliver.

But then again, neither were the Soviets, and Ole Qvist was forced to palm away a cracking effort early on before Yuri Gavrilov blasted one onto the post from distance. No, the Soviets were not about to capitulate. They rarely, if ever, did in those days.

Perhaps that’s what made the game so special. Both teams were determined to win. Both team drove forward.

But the Danes were inching closer. Jens Jørn Bertelsen flashed a shot wide when he should have hit the target, and Dasayev tipped over a curler from Lerby. And then it happened.

Laudrup’s errant pass was deflected into the path of Elkjær, who wasted no time in firing past the Soviet keeper. As he raced to celebrate in front of the fans, the stands were rocking in pandemonium. 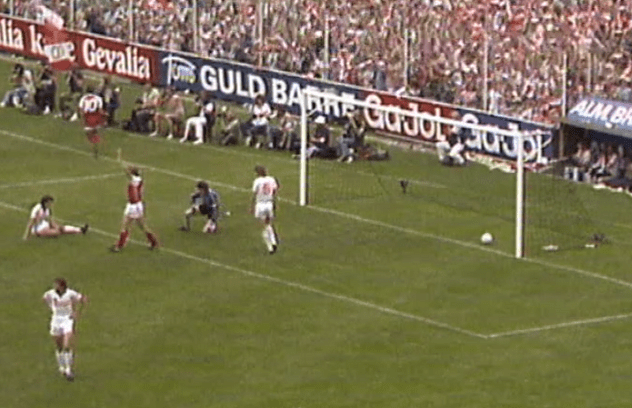 Preben who?
Years later, Tengiz Sulakvelidze, one of the defenders charged with curtailing the Danish attack that day, revealed that the Soviets were delighted when they saw the Danish line-up before the game and realised that Preben Larsen wasn’t on the team sheet.

“We saw that Larsen wasn’t among the 11 starters and the whole team was relieved,” he said. And rightly so.

At the time, Larsen was among the best attackers in the world having just led Serie A underdogs Hellas Verona to their first and only Scudetto – even managing a memorable goal against Juventus after losing his boot moments before smashing it in with his sock. He was also the runner-up to Michel Platini in the Ballon D’Or that year, after finishing third the year before.

But the Soviets were to rue their initial glee, for Larsen was not missing. What the Russians didn’t know was that in Denmark he was known as Preben Elkjær, and it was this name, and not his full name – Preben Elkjær Larsen – that was on the team sheet before the game. 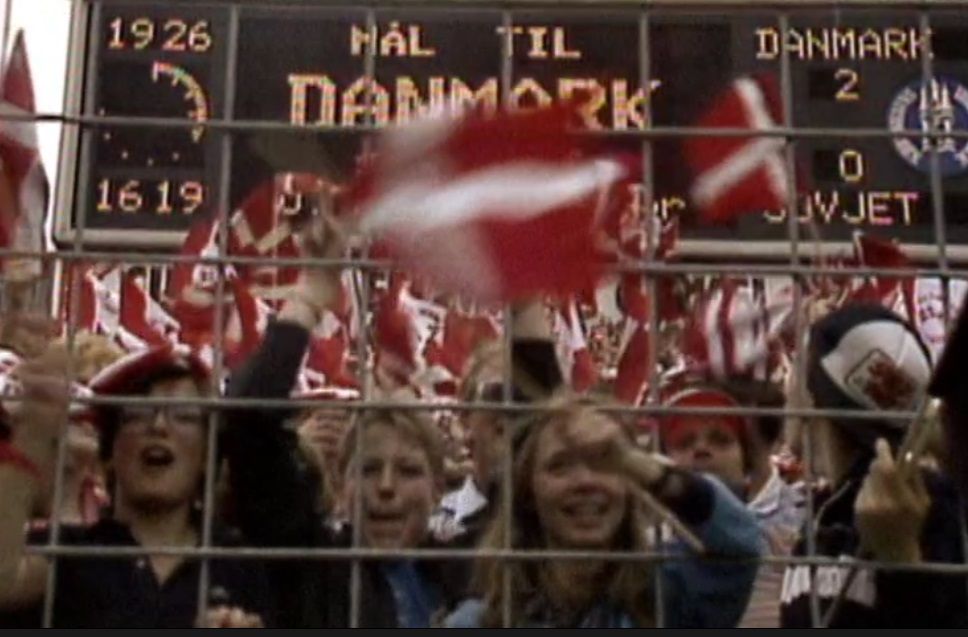 Sulakvelidze said that the coach Eduard Malofeyev blamed him for the disaster afterwards, contending that he had been tasked with covering Larsen – even though he himself wasn’t aware that Larsen was Elkjær. The fact that Sulakvelidze was Georgian played a role in him being Malofeyev’s scapegoat, contended the defender. Whatever the reason, he wouldn’t play again for the Soviet Union until three years later. By then, Malofeyev was long gone.

By the time the Soviets had realised that Elkjær was indeed playing, and doing so exquisitely, he had doubled Denmark’s lead, juking past the hapless Sulakvelidze to slot home from an acute angle that legendary commentator Svend Gehrs famously called  “a ridiculous angle to shoot from”. To be fair, Dasayev should have done better, but few present that day cared. Just 20 minutes in and the rout was on!

Michael’s magic
Only it wasn’t. For the well-oiled Soviet machine was as unrelenting as it was skilful and its cogs began spinning in furious unison to avoid embarrassment. Dasayev may have acrobatically tipped over a Bergreen header to prevent a third for the Danes, but minutes later the Soviets were on the board with Oleg Protasov turning to hammer a long-range effort into the top corner. Amazing finish and ‘niet chance’ for Qvist. 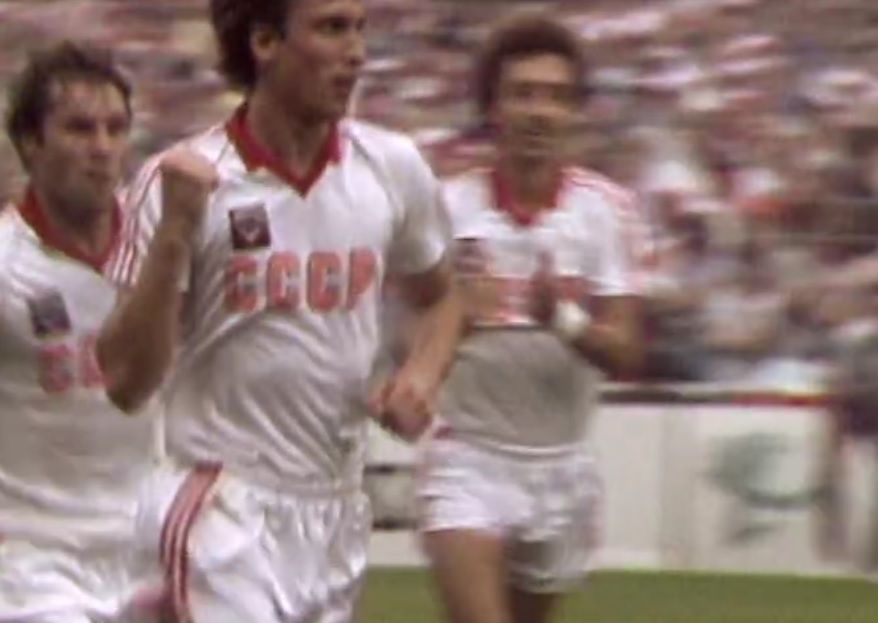 The Soviets smelled blood now and were unlucky when Sergey Gotsmanov first cracked one against the inside of the post before swerving a shot just wide minutes later. Only the referee’s whistle to halt the first half kept the Soviets at bay.

The second opened up in a back-and-forth manner. Both teams went close, the Russians desperate to equalise and the Danes looking to stick the dagger in. But over a four-minute period on the hour, the 20-year-old mercurial Michael Laudrup would turn the red tide.

Receiving the ball as he arrived in the box he left a Soviet defender for dead thanks to a fake shot before sliding to kick the ball into the top corner. Minutes later Lerby won the ball in midfield and as the Russians tried to recover, Laudrup ran the ball the length of the half and placed the ball low inside the post just out of the reach of Dasayev. 4-1! It was over now, surely. Not quite.

“I still feel, and I know it sounds weird, but despite us leading 4-1, we didn’t feel that the game had been won yet. It sounds strange, but it just seemed too unreal that despite the immense pressure we were under, we kept running up and scoring goals. It’s almost like they were playing better, but we keep getting the goals” Berggreen said. 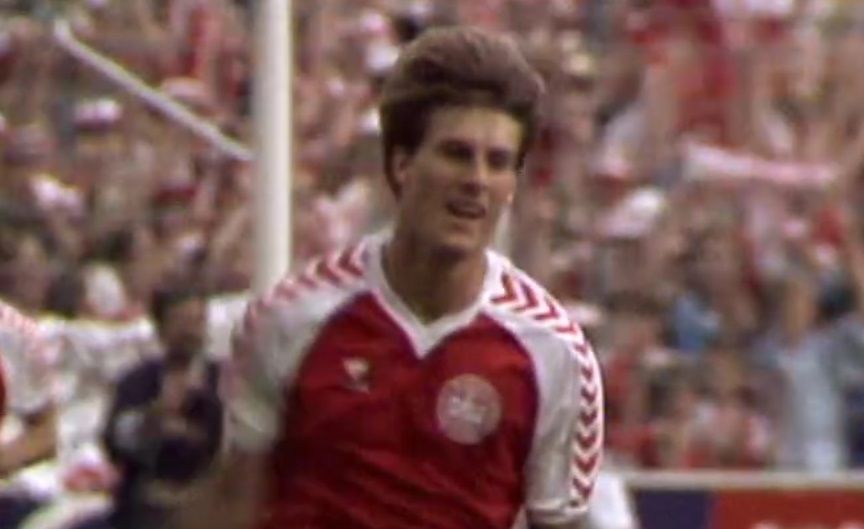 Football is not dead
Berggreen was right to be wary. Three minutes later, as the crowd swayed from side to side in the classic ‘sailing up the stream’ celebration, the Soviets struck back as Protasov volleyed home from close range. It was almost 4-3 shortly afterwards as Berggreen cleared off the line in dramatic fashion.

“If they had scored to make it 4-3, there probably would have been a bit of panic in the final five minutes,” Busk said after the match.

But the Soviets didn’t. The mighty bear had been slain and, as the final whistle sounded, the stadium erupted in euphoria. They weren’t there yet. Not by a long shot. But a big step had been taken towards Denmark qualifying for their first World Cup.

And the Soviets? They may have been slain that day in Copenhagen, but it takes two teams to produce a game of lore. Legendary Swedish journalist Cars Stenfeldt even wrote to Swedish TV begging them to purchase the rights to broadcast the entire game.

“The party is over, the triumph complete. And we who witnessed it humbly ask Swedish TV to buy the entire game. All those who think football is through being entertaining deserve to watch this performance,” he wrote in Expressen newspaper afterwards. 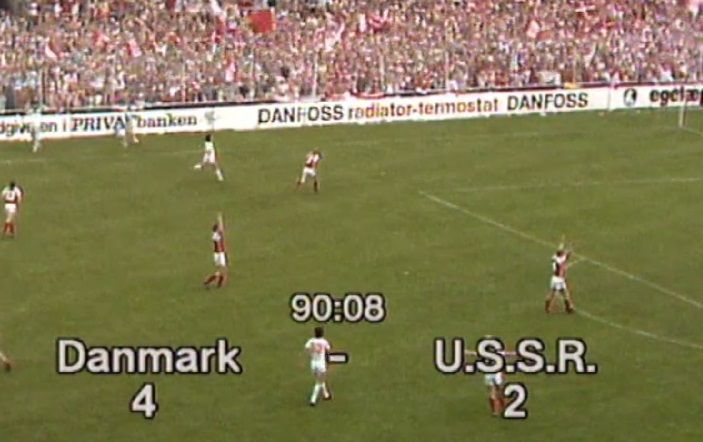 The world takes notice
Winger Per Frimann also remembers having immense respect for the Soviets, contending they had as much honour in creating such a magical football game as the Danes and their fans did. They may have been beaten that day in Copenhagen, but they were not defeated.

They eventually finished second and also qualified for Mexico where they would win their group ahead of France and get knocked out in extra time by eventual semi-finalists Belgium.

And who can forget that tournament. Not the Danes. Running past Scotland, thrashing Copa America champions Uruguay and even beating eventual finalists West Germany, the Danes played some of the most attractive football in Mexico. The Danish Dynamite was an explosion the entire world lapped up.

That is, until it all fizzled out against Spain in the last 16. But hey, that’s a whole different story. 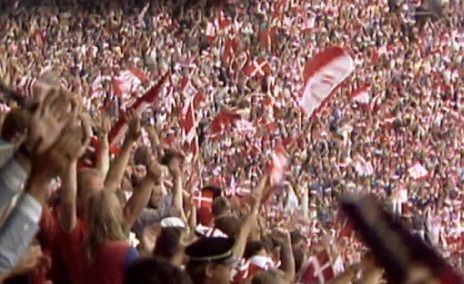