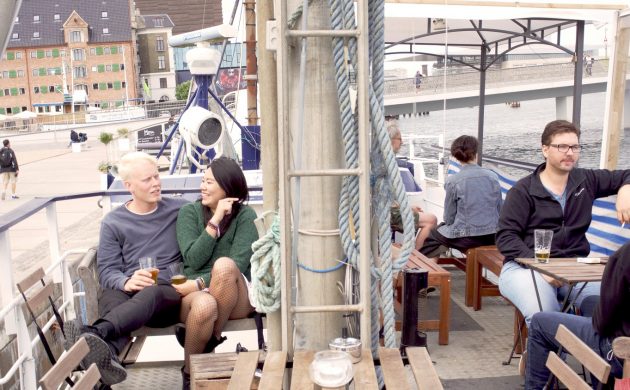 You’re sedately chugging down a canal in rural England, pipe in mouth and wheel in hand, keeping a wary eye out for hullabaloos; you’re traversing the white water rapids of the Zambezi under the gaze of natives on the river bank secretly hoping you’ll smash into smithereens; you’re nervously crouching in the cabin as a Messerschmitt Bf 109 looms into view on the horizon, quietly cursing your decision to head to France to rescue soldiers who are probably already dead.

Okay, I stole the last scenario from ‘Dunkirk’, but you get the idea: sitting in a boat stirs the imagination, and mine goes into overdrive from the moment I step aboard this wooden hull fishing boat, which is now a floating mecca for connoisseurs of craft beer. Moored in Copenhagen Harbour, it is just around the corner from Nyhavn and a stone’s throw from the city’s busiest cycle bridge.

Most bars use music to rock their establishments – but The Tipsy Mermaid doesn’t need a jukebox. Poseidon and his trident, an unmistakable maritime breeze and the occasional squawking seagull are here to ensure the seaborne symphony never stops. And who needs Stormzy when you’ve got a vibrating floor?

Saluting Captain Darby
The pub on a tub is the brainchild of Richard Darby, a Brit who arrived on the crest of the craft beer wave long before it crashed on the beach amidst the discarded chalk of a zillion whiteboards. Darby launched the presciently-named The Lord Nelson in a dimly-lit premises on Hyskenstræde in 2005, from where it has served the finest Danish microbrews it can lay its hands on – including the hands-down best IPAs I’ve drunk anywhere in the world!

But after all those years in a basement, it’s no wonder the publican who saw the light before his peers is seeking a little bit for himself. Onboard the Mermaid is a bracing, uplifting experience, and the energised barmaid on duty told me how pleased she was when the Nelson’s staff divided like the pieces on a chess board: to stay at home at the admiralty or embark on the Seven Seas.

Their new workplace has led an active life since its construction in 1967, sailing the North Sea under a number of different aliases before settling on Molly – the name of the owner’s dog (a recipe for disaster in the case of the Dambusters). Renamed and permanently moored, Darby and his crew take pride in maintaining her seaworthiness – not least her 385 horsepower engine.

Escape from the cauldron
Like at the Nelson, the craft beer range are all produced at Danish microbreweries and there’s an impressive 19 on tap (and three more at the onshore bar). Given that it’s a hot day, we follow the landlord’s recommendation and opt for a Fynsk Forår, a wheat beer made with elderflower that wouldn’t normally be on my radar. It’s refreshing qualities are a revelation, although the airy deck also plays a part in the respiratory respite I feel from escaping the cauldron I have just escaped from.

That in a nutshell is the allure of The Tipsy Mermaid: we are in the centre of this vibrant city in view of thousands of people, but detached from their reality courtesy of one step across a plank and (as Baldrick said) “the big blue wobbly thing that mermaids live in” beneath our feet.Refreshed we make a beeline for the pale ales – because we’re predictable and don’t know too much after craft beers. The Fopdoodle is a mango pale ale – fruity, feisty, fabulous – while the Flying Cloud IPA is another of those unmentionables that once partaken cannot be shaken.

We settle in at our vantage point, surveying a harbour that bustles with life on summer’s day like these. For the kind of quick getaway that only a Bond villain knows how to make, and beers championing the very best of Danish, this pub is hard to beat. Whisper it, but it’s too late … they’re going to need a bigger boat.