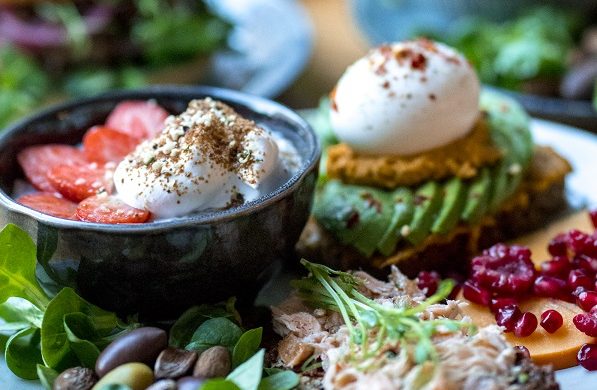 It’s hard to believe it tastes better than it looks
August 5th, 2018 6:00 am| by Douglas Whitbread

Café Baryl first opened in November 2016 on Griffenfeldsgade in Nørrebro – a part of the district that Adam Ørskov, one of the café’s owners, acknowledges was “a bit rough”.

Among their neighbours were the notorious Loyal To Familia gang, who at the time were fighting violent nightly pitch-battles with local rivals.

Nevertheless, Ørskov and business partner Sarah Madsen embraced their surroundings to produce a stylish and eye-catching café menu – under a moniker that befitted their locality (‘Baryl’ translates as ‘bandit’).

Suave aesthetics
A little over six months ago, they decided to leave the community and move instead to Århusgade in the plush neighbourhood of Østerbro.

Despite this transition, when I dropped by the new location in early March I was distinctly reminded of the old premises.

The basic materials used to furnish the interior of the Nørrebro café, such as concrete, steel, wood and stone, have once more been adopted at the new site to create a functional yet alluring dining space.

These minimalist industrial components are pleasantly broken up by the natural green hues of ferns and plantain leaves that line each of the café’s wide street-level windows.

Collectively, the setting evokes the subtle elegance of a contemporary design studio. However, upon reflection this seems to have always been the clear intention of the owners.

From the outset, Ørskov and Madsen have made careful aesthetic choices so that their food – harbouring what can only be described as true artistic merit – can take centre stage.

Eye-watering cuisine
The menu is consciously limited to six different dishes served throughout the day. Each of these give prominence to an aspect of the café’s culinary repertoire. However, the ‘morgenbaryl’, costing 119 kroner, has been specifically crafted with brunch in mind.

The arrival is guaranteed to send Instagrammers into a frenzy. But while it is an epic visual presentation, it tastes even better than it looks.

The dish centres on a bowl of chia or skyr pudding, topped with a delicate coconut-infused soy whip and fresh fruit. Next to it sits sliced avocado layered on rye, upon which is spread a sublime homemade carrot humus – topped with a boiled egg.

Alongside this is pulled hot smoked salmon on a mildly spiced crisp bread with accompanying raw pea shoots. The dish is finished with garnishes of almonds, olives, watercress, orange and pomegranate.

This is, in essence, a beautifully executed and well-balanced celebration of modern healthy cuisine, which even those possessing a strong scepticism of contemporary food trends will find hard not to enjoy.

Best of both worlds
The original concept behind Café Baryl’s menu was that the food should not only look incredible, it should also be delectable to taste. This is what made it so novel and exciting to many Copenhageners.

At their new site, they’ve not only continued this mandate but been able to enhance it in a space where their customers are no longer required to rub shoulders with the local gangsters.