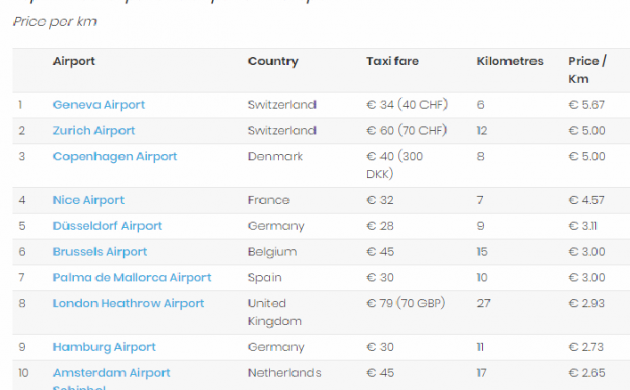 According to a new report from airport guide producer AirMundo.com, there are few other places in Europe where a taxi into town costs more than Copenhagen.

The report, ‘Airport Taxi Report Summer 2018’ (here in English), showed that Copenhagen is the third most expensive airport for taxis in Europe (out of the 50 busiest airports) in terms of the price per kilometre.

In terms of the most expensive taxi fare, London dominated due to the long distances in play. A taxi from London Luton to the capital topped the charts with 112 euros, followed by London Stansted and London Gatwick. Bergamo came in fourth, followed by Milan Malpensa, Oslo, London Heathrow, Munich, Zurich and Stockholm.

Aside from Zurich (a 12 km route from the city centre – the distance in Copenhagen is 8 km according to the survey, although 10 km is probably closer to the truth) all of the airports in the top 10 are over 27 km away from their respective city centres.

More transparency
Turkey was the most affordable in terms of price/km, with Istanbul Sabiha Gökcen, Antalya, Instanbul Atatürk, Ankara and Izmir Adnan dominating the top five. Russia also ‘fared’ well with four of the next five, as Moscow Domodedovo, St Petersburg, Moscow Sheremetyevo, Bucharest and Moscow Vnukovo completed the top 10.

According to AirMundo.com, the internet, flat rates and taxi apps have made it easier for travellers to get a fair price for their rides.

“Due to increased transparency, it is now much easier to determine what the price should be for airport taxis in Europe before stepping in the door,” said Guus Wantia, the CEO of AirMundo.com.

“The internet has played a key role in this transparency. In addition, airports and cities are more likely to take action against abuses nowadays, which makes it difficult for taxi drivers to overcharge travellers.”