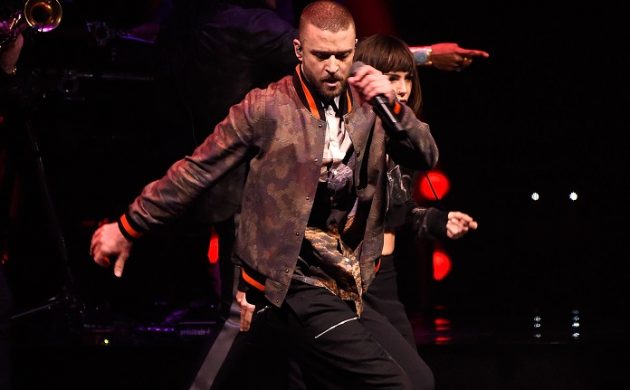 TORONTO, ON – MARCH 13: Justin Timberlake performs onstage during his “The Man Of The Woods” tour at Air Canada Centre on March 13, 2018 in Toronto, Canada. (Photo by Kevin Mazur/Getty Images for Live Nation)
August 7th, 2018 11:29 am| by Eric Maganga

When Justin Timberlake’s show at Royal Arena sold out quickly, this led to a second being announced.

Shadows of the Woods
With double the work therefore, the so-called ‘Man of The Woods’ brought backup in the form of pop trio The Shadowboxers.

And on this trip to the Woods, we certainly got to know Justin but also his protégés (see interview in video below).

Catalogue of classics
Being the ‘Man of The Woods’ tour – named after his latest album – we naturally got a lot of Timberlake’s new music.

But don’t worry: those who came to see the catalogue of classics from early in his career were not to be disappointed either.

Reflections from the Mirror
For ‘Mirror’, Justin was all lathered up as Royal Arena encouraged him to let loose.

To let you know how intimate a show this was, a bonfire was lit while Timberlake let every one of his backup singers showcase their skills.

Still got the moves
After gaining notoriety for his footwork when he first burst onto the scene, the Tennessee veteran seemed like he hadn’t lost a step.

The crowd danced along all night – after all, Justin stopped the show to make sure they were on one occasion.

Before ‘My Love’ he teased the crowd with the beat, then declared they were not ready for it.

Packing a punch
Warm-up act The Shadowboxers brought their eclectic brand of pop to Royal Arena. Their show was energetic and started off with a bang in the form of their newly-released single ‘Stop’.

The performance included a Michael Jackson cover, but not the one of Timberlake’s ‘Pusher Love Girl’ – the track that caught their mentor’s eye in the first place.