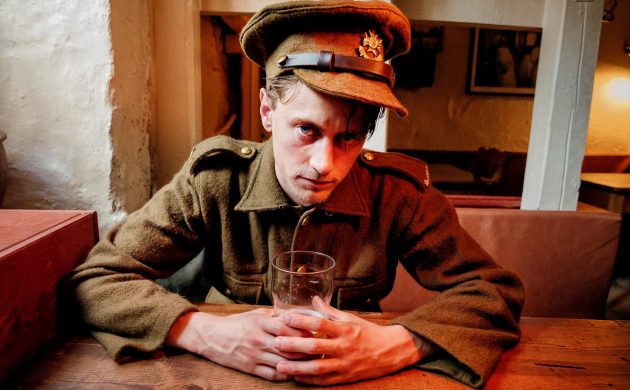 ‘Queers’ is almost brand new. The eight monologues charting a century of British LGBT history were penned last year, making this production by Leftfield Theatre, which also came into life in 2017, only the second ever staging.

Performed in three different seating areas in the city centre bar Galathea Kroen, the audience were taken on more than a mere emotional journey. True, at a running time of around three hours, this wasn’t a trip for the weary-hearted, but in the absence of overbearing characters (like Hamlet for example), it never felt too onerous.

An excellent first half of footsy
As any journalist will tell you, start strong, don’t save your best to last – and proceedings duly kicked off with the instalment penned by Mark Gatiss (Sherlock’s co-creator), the overall curator of ‘Queers’, which has eight different writers.

Icelandic actor Atli Benedikt gave a nuanced performance as the World War I solder in love with his commanding officer. His unspoken yearning lives in the shadows, and a chance moment at a smoke-filled train station gave us a hauntingly beautiful image: “There was no station, there was no train, there was no war”. Talk about transporting your audience!

Carol Hayes had fun as a cross-dressing ‘Burlington Bertie’ in the roaring 1920s, a barrow girl called Bobby who dresses up in tails to impress the ladies up west. As fingers slide into crevices, the eroticism knows no boundaries – between the lap and the back, for example. One problem though: Carol doesn’t look like a man, so it’s hard to believe her ultimate tale of deception … which involves a candle without the hygge.

Fast-forward nearly 60 years to Phil, an actor who has cornered the market for dead gay guys. I know … you’re thinking Rock Hudson, but this is a light number, inspired by Colin, the most boring Eastenders character in history, who just happened to have a boyfriend. Credit to Daniel Neil Ash who really succeeded in making it sound like the audience was actually speaking to them. Every time he drank, it was like we asked him another question. It felt like the most interactive of the octet … and the quickest (or so we thought).

To complete the first half, Chris Thabo Pietersen plays Frederik, a Caribbean émigré who swings his hips to the top of late 1930s Soho society, vividly painting a picture of the permissiveness of the era. The South African actor’s performance was a little uneven at times, but he did a commendable job at conveying the wonder and dread of coming to a new country.

Forced into extra time
If I had to cut a segment to ease the running time, it would have probably been the opening monologue of the second half. Although beautifully written – the romanticised air-raid is a highlight – the casting of actress Trine Runge (albeit with a great hairstyle), to play the Quentin Crisp of the tailoring world reminiscing about a war the play had already reflected on, felt like a bum steer and only succeeded in stalling the narrative.

Cue the standout best performance of the night. During the casting process Hinrik Kanneworff had astounded the director with his dedication to his craft, learning a Nottingham accent via YouTube and his lines just as fast. The Icelander’s naturalistic turn captured the youthful exuberance of a Midlands teenager on a day-trip down to London to campaign for a lowering of the age of consent. Kanneworff held us in thrall as he recounted his meeting with an older man – to such an extent we might just as well have been listening to a drinking companion in the local.

The assurance continued with Kathryn Dorgan as the dutiful 1950s ‘beard’. It was note perfect and impossible to fault, but it proved to be the last high point of the night, as Phil, the actor from the 1980s, returned for a third and final instalment – an appearance too far after his cameo in between Acts 5 and 6. While that was strictly for laughs, his finale delivered the elephant in the room. Say it like Hannibal Lecter: HIV.

Sadly the final act felt a little empty as well. Martin Popplewell, a late replacement barely nine days before opening night, was too manic as Steve, the groom rehearsing his speech at his wedding to Adam (Adam and Steve, geddit?). Unintentionally, the garish set design succeeded in asking the audience whether the last century of struggle had been worth it. Striving in the shadows for what exactly?

It made one yearn for a little more Oscar Wilde – beyond the line that neatly linked the monologue to the first. If only the dead playwright could have replaced Steve and questioned why conformity like this is such a victory.

Last orders? The last rites?
Phew. It was over. Two fewer segments would have rendered a better overall performance, but there’s no doubting the experience the audience had. The setting, the intimacy, the performances – this was something that will stay with them for weeks … even if at times it felt like years had passed.

Director Lee Elms deserves credit for an inspired choice of material and the bravery to cast individuals of unknown acting quality. He mostly achieved his aim to render a piece of theatre that felt like we were having a conversation down the pub. And it really helped that we were.