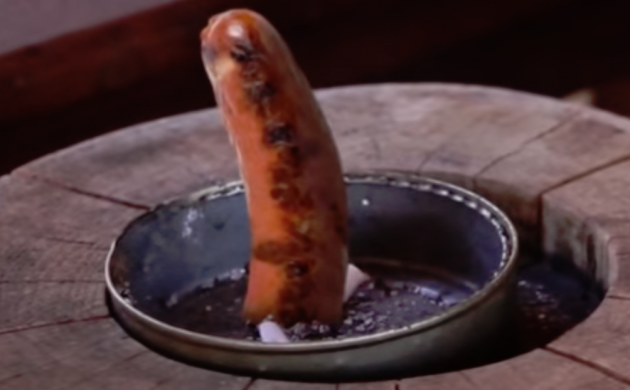 Stub out that sausage … although we’ve all seen worse at the neighbour’s barbecue (photo: screenshot)
September 25th, 2018 7:56 am| by Ben Hamilton

Men, women, children, public employees and laundrette workers chain-smoking like there’s no tomorrow – on the trains, planes and automobiles, in their offices and into the faces of their new-born babies. The whole world stank of ash. But it was normal.

Smoked sausages, but not so tasty
Jakob Jønck, the former owner of the fitness app Endomondo, contends that the same is true of meat.

To get his message across he has launched a campaign entitled ‘Time to Quit?’, which includes an advert (see below) containing footage of people smoking in the 1950s and 60s.

Only they are not smoking cigarettes. No, they are smoking sausages!

Doesn’t have to be our future
Jønck’s organisation Simple Meat, which sells organic vegetable-based protein alternatives, has even set up a helpline to advise anyone who wants to quit.

“We have tried to present a picture that illustrates how absurd we are as people when we consider something like this as normal,” he said during an appearance on DR last night.

“Just because it’s been our story, it doesn’t have to be our future. To start a discussion about something so urgent regarding which we’re so far behind, we have to start it somewhere where people can stop for a moment, turn off the autopilot and start to reflect.”

Poor advice, says expert
Professor Arne Astrup, a nutrition expert attached to the University of Copenhagen, was not happy with the comparison, he told DR.

“Comparing the risk of getting cancer from eating meat to that of smoking is unfortunate because it simply does not tolerate comparison,” he said.

“Besides, if you totally drop meat and only eat plants then you might encounter problems such as not getting enough vitamin D, calcium and various other things.”

Young girls and elderly people were particularly at risk from the deficiency, he argued.