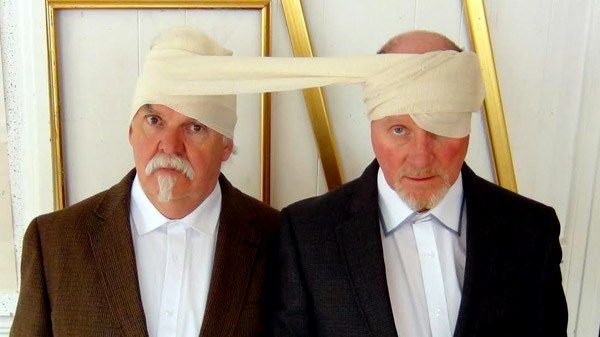 From the creators of ‘Stinkfoot, a Comic Opera’ and ‘Darwin and the Dodo’ comes another anarchic, happy-go-lucky comedy in which anything could happen, and it often does!

This performance by Desperate Men, a touring street theatre company from Bristol in the UK, has been compared to Monty Python being performed by Statler and Waldorf from The Muppet Show.

If portentous pomposity sounds like fun, you’re in luck!

From Dodos to Dadaism
Made in response to the centenary of the horrors of the First World War, the show ‘Slapstick & Slaughter’ captures both the absurdity and tragedy of warfare through the performance art of ‘Dadaism’, which is itself a century old this year.

Dada was an anti-war movement in Europe and New York in art and literature based on deliberate surrealism, irrationality and the negotiation of traditional artistic approaches and values.

Tearing apart the “flimsy reality”
Using their bodies, voices and playful, physical, darkly comedic elements, performers Richard Headon and Jon Beedell portray how the horrific conditions of World War I manifested themselves in the surreal art that resulted from it.

As Desperate Men – one of the United Kingdom’s most versatile and inventive outdoor arts companies since its founding in 1980 – mainly work on large-scale outdoor art projects, the show is designed to work both indoors and outdoors.

Stating their intention to “make mincemeat of flimsy reality”, the performers invite audiences to reflect on the absurdity and horrors of WWI, splattering big ideas on a small canvas, reflecting on the reactions in art to the war’s barbaric chaos and wholesale destruction of lives, and comparing its cultural aftermaths to equally absurd modern conflicts.

To CPH POST readers, the theatre is exclusively offering tickets to the special price of 100 instead of 135kr.

The offer can be accessed here