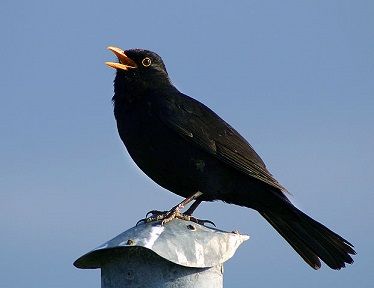 A deadly mosquito-borne virus has been wreaking havoc with the blackbird population in northern Europe. This year in Germany alone 25,000 birds have succumbed to it, reports DR Nyheder.

The usutu virus has now reached the Danish border, according to the membership magazine of the Danish ornithological society, and the society’s biologist Henning Heldbjerg predicts it could appear in Denmark next summer. However, according to Heldbjerg, a cold summer could save the birds, as mosquitos thrive best between May and September.

Blackbirds affected by the virus can be spotted by changes in behaviour. “The birds that have the infection become apathetic and sluggish. They don’t fly away, and when they’ve had the virus for a day or two, then they drop down dead,” said Heldbjerg.

Although the virus does not usually affect people, it can happen, so any dead blackbirds should be treated with caution.

Rare dolphin spotted in Limfjord
People living near Aalborg and Nørresundby in Jutland have been able to enjoy the sight of a rare visitor to Danish waters: a short-beaked common dolphin. This is the first time that this kind of dolphin has been seen so far up in Limfjord, reports TV2 Nyheder. The dolphin was first spotted before the weekend, but at first it was uncertain what kind it was. The species is common around the British Isles and is often seen in the North Sea. Biologists speculate that climate change has altered the dolphins’ range and that they may become permanent guests around Denmark.

Yes, there are Arctic wolves in Greenland
A long-running discussion as to whether there are independent populations of Arctic wolves living in Greenland has finally been resolved. A new study carried out by Greenland’s nature institute and the natural history department of the University of Copenhagen has concluded that a small, isolated population does exist, TV2 Nyheder reports. “For almost 100 years people interested in wolves have been discussing whether there is anything special about them or whether they were wolves that strayed in from America,” said Mikkel Sinding from Greenland’s nature institute. “By using the complete genome, we can now see that there is a very defined structure in the groups of wolves that can be found in the North American Arctic,” he added.