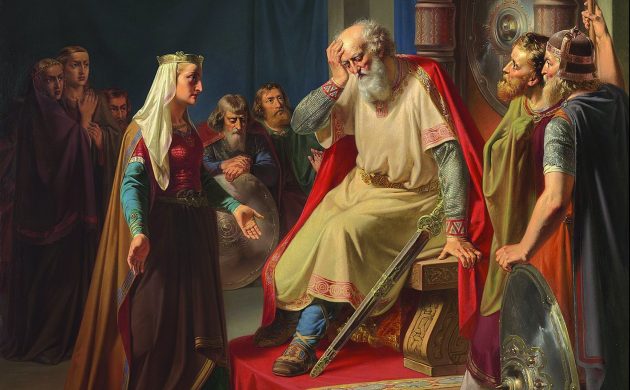 Those who have lived in Denmark for any extended period will know the importance of the Danish Royal Family to the nation. Their main residence, Amalienborg Palace, stands tall and proud in the heart of Copenhagen as a symbol of their legacy, attracting tourists from all over the world.

The monarchs themselves set an example for all Danes, both inspiring people to do better and fostering a sense of national unity. Much of the Royal Family’s influence is clear when you stroll through the charming streets, but many people may not be aware of the long and sometimes complicated history of the Danish monarchy.

Where it all began
The roots of the Royal Family date back to the early 10th century when Gorm the Old, considered Denmark’s first true monarch, consolidated power from the small town of Jelling between 936 and 958.

We know of him through the great runic stones he erected, now named the Jelling Stones – the first of which was dedicated to his wife Thyra, who is referred to as ‘tanmarkar’ or ‘Denmark’s Salvation’. At the time of Gorm’s reign, the nation was only loosely unified. Gorm would act as the unifying power that would bring the nation together, eventually leading to the great nation we know today.

After Gorm’s death, the crown fell to his son and heir to the Jelling dynasty, Harold Bluetooth, the king best known for introducing Christianity to Denmark, although the latest archaeological evidence has pushed that date back by quite some time. The religion would go on to encompass the nation.

Bluetooth’s reign also marked the beginning of the North Sea Empire, a name given to the joint nations of England, Denmark and Norway.

Conquering England
The empire reached its biggest size during the reign of Cnut the Great (1016-1035). The whole of England had fallen to his father Sweyn Forkbeard in 1014, but Cnut had to launch his own invasion to claim the crown.

He attempted to unify the two nations through culture, taxation and, of course, violence. Later he would conquer the Norwegians as well, consolidating the newly-formed North Sea Empire.

Cnut pushed Christianity wherever he conquered and had extensive ties to the Holy Roman Empire. But unfortunately his legacy in England would be erased after the Norman Conquest in 1066.

Legacy maker
The next five centuries were characterised by almost constant warfare with the south, Norway and Sweden. The monarchy at the time was elective and the monarch would receive absolute power upon inauguration.

The most notable monarch was Margrete I (1387-1412) – the name of the current queen is spelt with an extra letter, Margrethe II, although she still chose to be the second to use it.

Over Margrete’s life, she consistently out-manoeuvred her rivals, successfully uniting the regions of Denmark, Norway and Sweden, to leave a powerful legacy for her heirs.

The builder king
Assuming the throne aged 19, Christian IV reigned as king of Denmark-Norway and duke of Holstein and Schleswig from 1588 to 1648. His 59-year reign is the longest of any Danish monarch – and of any Scandinavian monarchy.

He is frequently remembered as one of the most popular, ambitious and proactive Danish kings, having initiated many reforms and projects. Although his reign encompassed a period of stability and increasing wealth, he also became involved in numerous conflicts, such as the Thirty Years’ War (1618-48), which devastated much of Germany, undermined the Danish economy and cost Denmark some of its conquered territories. Christian rebuilt and renamed Oslo, the Norwegian capital, as Christiania after himself – a name used until 1925.

His legacy is still very much in evidence today, as he was responsible for many of Copenhagen’s architectural pearls, including the Round Tower (built as an observatory), Rosenborg Castle, and the old stock exchange building.

However, his successor Frederik III signed away absolute power in November 1665 in a charter named Lex Regia (or Kongeloven) in exchange for the crown and a male primogeniture-based system. This agreement led to the nobility and common folk gaining a certain amount of political influence. The terms of the charter took full effect in 1670, when Frederik’s son Christian V acceded to the throne.

Thus, the hereditary monarchy was formed under which Danes still live today, making the Danish monarchy one of the longest to have existed.

A royal affair
The 1700s would prove to be a difficult period for the monarchy. Christian VII (1766-84) was plagued by mental illness and only nominally the ruler during the period. The de facto ruler was the German doctor and Enlightenment thinker Johann Friedrich Struensee.

During his time at the Danish court, he began an affair with Christian’s wife, Princess Caroline Matilda, and of Christian VII’s two children – the future monarch Frederik VI and Louise Auguste – the princess was widely believed to be the child of Struensee.

In 1772, Christian VII divorced Princess Matilda and Struensee was arrested and later executed. Matilda would live her days out in Germany, where she died aged just 23. This turbulent period was the subject of the 2012 film ‘A Royal Affair’.

King Frederik VII (1848-63), the childless king, ended up being the last king of the House of Oldenburg – a line of succession dating back to 1448. He was also the last absolute monarch as in 1849 he signed a constitution, giving Denmark a long overdue constitutional monarchy. It was a decision that endeared him to the public for the rest of his reign, but despite marrying three times he was unable to produce an heir.

Europe’s father-in-law
When Frederik VII died, a distant relative from the House of Glücksburg was picked to become king: Christian IX.

Although his reign had a rather inauspicious beginning, Christian IX acquired the nickname ‘Europe’s father-in-law’ as four of his children went on to sit on major European thrones. Dagmar married Tsar Alexander III and became empress of Russia, Alexandra married Edward VII and became the queen and empress of the British Empire, Vilhelm became King George I of Greece, and Frederik succeeded his father as Frederik VIII.

It could have been five children, as Prince Valdemar turned down the offer to become king of Bulgaria. But just before his death, Christian IX was able to witness his grandson Prince Carl being elected king of Norway.

War, tumult and peace
Christian X (1912-1947) ruled during a particularly tumultuous period that included both world wars. However, it for a little-known event outside Denmark that he is probably best remembered at home: the constitutional Easter Crisis of 1920 in which he expelled a democratically elected cabinet because of a disagreement. His ruling style was described as authoritarian and dogmatic.

In his later life he became a symbol of hope for a nation in distress during the German Occupation of Denmark. Every day he would ride his horse, unaccompanied by guards, through the streets of Copenhagen in a gesture of defiance to the Germans. On these rides, he was feted by swarms of children and citizens on bikes. Some stories claim he wore the star of David in solidarity with the Jews, but this was never confirmed. He did, however, help fund the escape of Jews from Denmark to neutral Sweden.

His son, Frederik IX, was a popular king and because of his love of all things nautical was known as ‘The Sailor King’. He often wore his naval uniform and also had a number of tattoos. As well as this, Frederik was seriously interested in classical music, played the piano and made a number of recordings as a conductor.

Frederik would go on to amend the constitution to allow women to become monarchs. This paved the way for Denmark’s current monarch, Queen Margrethe II, who became queen in 1972 and celebrated her ruby jubilee in 2012.

However, she still has another 13 years to go if she wants to match Christian IV, by which time her heir, who will become Frederik X, will be 63.