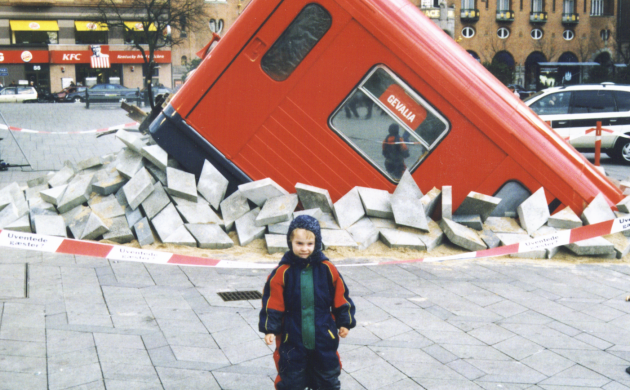 A train crashes at Rådhuspladsen in 2001: perhaps the most famous Danish April Fools’ Day prank of them all (photo: Lars Andersen)
April 1st, 2019 5:51 am| by Dave Smith

April Fools’ Day – how we have laughed! From fooling half the foreign staff at the US Embassy in 2017 with the news that their new ambassador would be the golfer John Daly, to trying to convince you that Scandinavians are more proficient at English than the Brits (partly due to their erroneous use of the word ‘literally’), we’ve done our best over the years.

But given the rise of fake news emanating from a White House where every single day it is Groundhog Day stuck on April Fools’ Day, there has been an undeniable trend amongst newspapers in recent years to not include a hoax story – with the majority now coming from the business community.

In Denmark, it is a tradition that began in 1914 when a Copenhagen newspaper tried to convince its readership that the sun had ‘slept in’ and was nine minutes late rising. But in reality, one newspaper had been at it for years, although it didn’t always need April Fools’ Day as an excuse to publish a bogus story.

Telegram from the Moon
In August 1904, fully three decades before Orson Welles’ famous ‘War of the Worlds’ radio broadcast caused panic across the United States, an advertorial in Politiken for the Dalsgaard’s Coffee Company claimed that aliens living on the Moon had sent an optical telegram to an observatory in Mexico.

The problem was that it wasn’t marked ‘advertorial’.  And it was placed on the front page! It led to a priest in Frederiksberg pronouncing that Judgement Day was imminent and that we would soon be walking “hand-in-hand with our brothers from the Moon”.

But this was not the first time that the newspaper had courted controversy, as seven years earlier one of its young journalists decided to invent a story.

Digestion issues
Nothing in the career of Valdemar Koppel, 25, had suggested he would one day disregard the standards advocated by the newspaper’s founder Edvard Brandes, who decreed Politiken to be “an organ of the highest quality”.

But after five years in the job, Koppel had clearly had enough. Assigned to the most mundane stories, and with no sign of promotion, the young journalist decided to have some fun. In April 1897 he wrote a news article that was completely fabricated.

The story went to print and caused uproar on the streets of the capital as the public digested the alarming realisation that the city was playing host to a group of people with very different digestion problems: cannibals!

Impromptu midnight feast
Koppel mischievously timed his story to coincide with a performance by a group of some tribesmen at the Circus Theatre on Studiestraede – the Danish leg of their European tour – and claimed in his article they had very likely murdered their booking agent, Carl Scheel-Vandel.

Many spluttered into their coffee as they read about a “drama so horrible and so inhumane that at first your mind will not allow you to accept it as the truth”, learning that the popular promoter had “come to a gruesome end”.

The story related that when Scheel-Vandel had entered the theatre’s sleeping quarters late one night to check on the tribesmen, disaster struck. In the aftermath of the midnight feast, a witness described how half-eaten bones were left on the floor, while the walls were covered in bloodstains.

“All the promoter’s clothes, including his hat, were placed neatly in a pile. The only conclusion could be that Mr Scheel-Vandel had been eaten by cannibals,” wrote Koppel.

“The only person who could give an accurate account of what occurred that night is no longer with us.”

On the fleshy side
Having already broken the cardinal rule of journalism, Koppel then went on to break the second: speculation.

How could a “powerful man, if a little fleshy”, he reasoned, be overpowered by his diminutive guests? The journalist suggested they must have “leaped on him from behind, overpowering him before he had chance to utter a sound”.

The report caused uproar, and soon an angry crowd had gathered outside the theatre. Despite the indignant tribesmen claiming they had eaten nothing more sinister than Danish meatballs that evening, they were led away in handcuffs by police.

One officer, who had no doubt read the article, described the “cannibals” as having “sinister grins and bared teeth, lacking only a bone through their nose to complete the picture”.

Esteemed infamy
It was not until the next day that the truth came out. After Scheel-Vandel appeared intact, apparently none the worse for his “grisly ordeal”, demanding to know what all the fuss was about, Koppel was summoned to the editor’s office to explain himself.

When they discovered that they had been duped, angry subscribers deserted the paper in droves and a number of grovelling apologies had to be issued – not least to the innocent tribesmen.

The question of how the paper’s editor had allowed the story to slip through was answered by Koppel himself, who claimed that his boss had glanced at it and grunted: “Stick it on page seven.”

In his story, Koppel had joked: “Although a grand funeral has been planned, very little remains to be buried.” And the same was true of his career, although his infamy lives on thanks to articles like these.