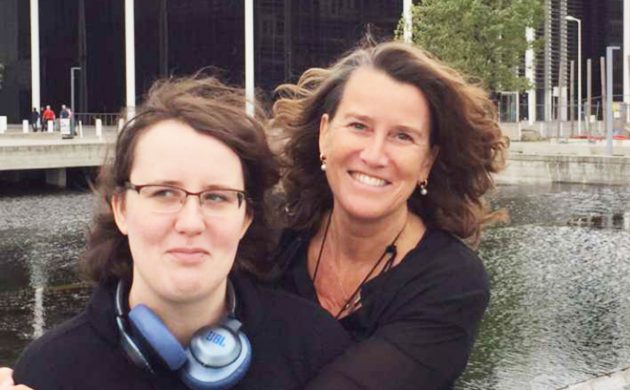 Liselotte Hyveled and her daughter Emilie
May 16th, 2019 3:19 pm| by Eric Benninghoff

More than a third of autistic kids in Denmark aren’t going to school, according to a new survey conducted by Autism Denmark, an organisation committed to improving the quality of life of individuals with the disorder.

Of the 35 percent not attending, some have been absent for five years.

2012 law to blame
Heidi Thamestrup, the president of Autism Denmark, blames the country’s 2012 Inclusion Law for the increasing trend among autistic kids aged six to 16, which her organisation has been observing ever since it started yearly inclusion surveys in 2013.

The inclusion law aimed to transfer more children with special needs from special schools to general public schools. It set a target of 96 percent of the entire student body in Danish public schools receiving their education in regular classrooms by 2015.

“Inclusion in Denmark is just a word … it means nothing,” Thamestrup contended.

“The politicians who made the 2012 law had a lot of power but no knowledge. They didn’t understand what the consequences could be if it wasn’t implemented properly. No one understood how complex this would be.”

Lacking the budget
Thamestrup contends that the Inclusion Law was created to save the government money by shifting kids from more expensive special schools to mainstream schools, without providing them with the necessary support to be able to succeed.

The budget in schools for special education students is very low, explains Thamestrup, and teachers in mainstream classrooms often don’t have the knowledge and training required to support and include children with autism.

As a result, these kids are frequently not receiving the proper treatment in mainstream settings and dropping out of the school system.

Thamestrup believes the Inclusion Law is part of a larger political movement aimed at initiating cutbacks in the welfare state, which includes spending less money on special needs individuals.

“Those who feel it the most – and feel it first – are those with the strongest needs, such as kids with autism,” she said.

Emilie’s example
“They’re not home because they don’t want to learn – but because the framework around the learning prevents them from being able to do it,” concurred Liselotte Hyveled, the chairman of the Danish Disability Council, whose now grown-up daughter Emilie has autism.

Emilie started at a private school – which worked well until she was diagnosed at the end of the seventh grade. She then left school during the first week of the eighth grade and sank into a suicidal depression that kept her out of the system for two years.

She wanted to get an education, but was bullied and wanted nothing to do with neurotypical children – those without neurological illnesses or disorders.

After being re-integrated into a small special needs school, Emilie got into the specially supported Higher Preparatory program for people with autism. But she only lasted five days because of the overwhelming public transport scene she had to face at Nørreport Station during her commute each day.

Hyveled laments the absence of a private bus to take the kids to school, as she thought it was a great program, but at a non-ideal location. “A more individual, flexible environment is needed,” she concluded.

Now 22, Emilie is completing her education online, and she hopes to become a fantasy writer.

Inclusion can work …
Tinne Steffensen, an analyst with the Danish Institute for Human Rights’ disability team, is an advocate of inclusion.

“In general, inclusion is something to be aimed at because it brings down the barriers of segregated education systems,” she said.

“But of course, it’s important to look at the barriers in typical public schools for people with special needs.”

According to Steffensen, the state has a commitment to provide “reasonable accommodations” to these individuals, because Denmark is a ratifier of the UN Convention on the Rights of Persons with Disabilities.

This entails providing the necessary modifications needed to bring down the barriers that prevent people with special needs from properly accessing equal education.

One size does not fit all
But Hyveled is not so sure, as “neurodiverse kids are all different”, and this creates problems.

“As they are much more sensitive to outer stimuli and the need for structure, it is important to access and apply individual solutions when attempting to integrate children with autism in ordinary schools,” she contended.

In other words, a ‘one size fits all’ structure is not sufficient. Accommodations such as smaller classrooms, quiet lunch areas and sensory tools can be essential for the success of some of these kids.

“In addition, it is a prerequisite for successful integration that the teachers and staff have sufficient information about the disability in question to apply and understand the appropriate support,” added Hyveled.

Harmful to society
Thamestrup is adamant the current system is harmful. “As it is at present, we are hurting these kids,” she said. “They have potential, but they’re not getting a chance right now.”

While the learning curve becomes steeper for the students, diminishing their possibilities of breaking into the workforce, there are also negative repercussions for society at large, according to Hyveled.

The parents of kids with autism not attending school may have to stay home and quit their job, and they have a higher chance of becoming divorced. Society, meanwhile, is losing out financially by not utilising the full potential of all its citizens.

The stress can often lead to depression. According to Thamestrup, many psychiatrists have told her her that they’re seeing more kids with autism between the age of seven and nine contemplating suicide than ever before.

Nevertheless, the Inclusion Law has had a beneficial impact on some individuals with less complex needs, according to Steffensen.

“There have been children who have gained from it, and children who haven’t,” she said, citing positive effects such as improvements in grades and an overall movement towards greater inclusiveness for those who’ve been able to integrate more easily.

The well-being, participation and development of autistic kids within their school settings, she contends, is at the core of what real inclusion should look like. Both the student, and those looking in from the outside, should be able to feel it.

“We need to ask ourselves how we can get the best out of the talents people have,” Hyveled concluded.