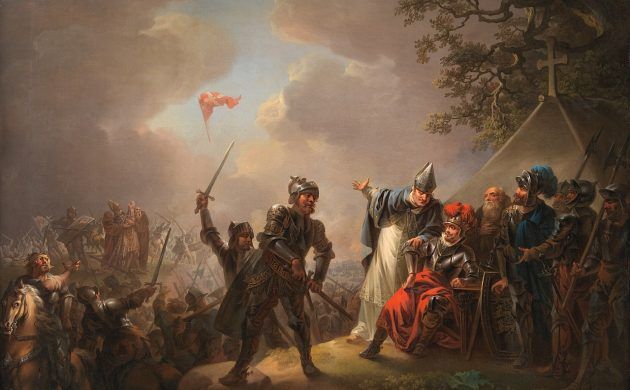 The date 15 June 1219 holds a special place in the heart of Danes as the official birthday of their national flag, the Dannebrog. Every year on Valdemar’s Day – a tribute to the king on the throne at the time, Valdemar II – the flags can be seen fluttering all over the country.

Earlier this month the 800th anniversary was duly marked – by Queen Margrethe in Estonia, where the flag miraculously fell down from heaven to inspire the Danish army to victory, and by Prince Joachim, Crown Princess Mary and many others at Copenhagen City Hall.

Her majesty’s visit to Tallinn was particularly fitting as the Estonian capital was founded by Valdemar II. Tallinn literally means ‘Danish City’ and a white cross on red ground figures in its city arms.

Banner from heaven
Said to be the oldest national flag in the world still in use today, the origin of the Dannebrog is shrouded in fable and myth originating in the reign of Valdemar II.

Harbouring dreams of reigning over a Danish empire that would embrace both the North and Baltic seas, Valdemar saw the German advance into the Baltic countries at the eastern end of the seas – where an important trading base was situated – as a direct threat to Denmark’s interests.

Sending out a call to all Danish villages to provide their quota of ships, the Danish naval fleet set sail eastwards on a mission to secure a presence in the region by invading Estonia. By obtaining the Pope’s blessing, the expedition was recognised as a genuine crusade against the pagans of Estonia.

After landing in Lyndanisse, the Danes were met by Estonian leaders who came bearing gifts and feigning surrender to the invading army. However on 15 June 1219, thousands of Estonians launched a surprise attack on the Danish camp.

The ill-prepared Danes suffered huge losses and were on the verge of losing the battle. As legend has it, that was when Archbishop Anders Suneson fell to his knees to pray for a sign of victory.

In answer to his prayer, a red flag with a white cross is said to have fallen from heaven. The flag was taken as a ‘sign of God’ and the king took it in his hands and waved it to his despondent soldiers, giving them the hope and courage to push forwards and win the battle – thus making Estonia a part of the Danish Empire.

Although no historical evidence supports these claims, as the first accounts of the so-called miracle came 300 years later and differed in various ways from the famous story, the tale of how the national flag came to be has become part of Danish folklore.

Thanks Bomber Harris!
The story of the flag doesn’t stop there, however. Another narrative says that the original flag that floated down from heaven was used again when the Danes againt tried to conquer Dithmarschen in north Germany under King Hans in 1500. The Danes, who thought they were in for an easy victory, lost not only the battle but also their precious flag in the encounter.

The stolen flag was hung up in a church in Dithmarschen where it stayed until 1559 when King Frederik II finally conquered the region. Frederik then took the flag to Schleswig Cathedral (in present day northern Germany) where it remained until its last shreds disintegrated.

Other accounts of where the Dannebrog came from speculate that a white cross on red bunting was sent by the pope to the Danish king for use in a crusade against the eastern pagans, or that it was the symbol of the Knights of St John of Jerusalem, or Knights Hospitallers. Another account claims it originated in 1208 at the Battle of Fellin and not the 1219 Battle of Lyndanisse.

The oldest existing flag of recent times, dating from 1427, was preserved at St Mary’s Church in Lübeck until it was destroyed by an Allied bombing raid during the World War II.

Life before Dannebrog
The name ‘Dannebrog’ probably derives from the Frisian words for ‘dan’ (red) and ‘broge’ (white cloth).

The earliest concrete source linking the flag to a Danish king is a Dutch armorial written between 1340 and 1370 that contains the Danish flag among a listing of almost 2,000 coats-of-arms from all over Europe.

King Valdemar IV the Victorious (Valdemar Atterdag) was therefore probably the first Danish king to use the flag, and it is interesting to note that he grew up at the imperial court in Aachen (Aix-La-Chapelle) in today’s Germany, and it was there that he doubtless came across the red banner of the Holy Roman Empire with its white cross.

The Holy Roman Empire is the name applied to the European territories ruled by Charlemagne (crowned in 754) and is a continuation of the original Roman Empire which existed until 1806.

In a song dating from 1500, the red-and-white banner is associated with Emperor Constantine the Great’s dream of the cross at the Battle of the Milvian Bridge outside Rome in 312 AD. It was during this campaign that Constantine, the first Christian emperor of Rome and founder of Constantinople, was said to have seen a vision of the cross of Christ superimposed upon the sun accompanied by the words: ‘In hoc signo vinces’ (in this sign conquer), which established the white cross as a dominant motif in crusader flags.

Shortly before 1200 the red flag with a white cross replaced the original, completely red flag of the Holy Roman Empire, on which the emperor superimposed a white cross when he embarked on crusades.

Long before becoming the national flag of Denmark, the red-and-white flag was used by the Portuguese Order of Christ during an early 14th century crusade against the Moors, as well as being adopted by the Duchy of Savoy (Savoie), now a part of France, and used similarly to give crusades the imprimatur of the Holy Roman Empire.

Similarly the myth of the Dannebrog falling from heaven is related to Constantine’s miraculous vision, and it first appeared in a Portuguese version.

Proud nationalism
“It is nonsense to call the Dannebrog the oldest flag in Europe – it is a copy of the Holy Roman Empire’s flag, which is much older,” Nils G Bartholdy, a heraldry expert at the Danish State Archives, told CPH POST many moons ago.

“Lots of countries have flags with crosses. Look at the banners of the other Scandinavian countries and the flag of England – the cross of St George – which is just the Dannebrog in reverse.”

Today the flag serves as a symbol of the nation’s history and people, used for diverse purposes such as greeting family and friends arriving at the airport, advertising special prices at the supermarket and marking special occasions such as birthdays.

This everyday usage dates back to the 1800s when common people started using the flag on ‘unofficial’ days, such as weddings, birthdays, and funerals so often that in 1834 King Frederik VI issued an edict reserving the right to fly the national flag exclusively to the state and royalty. However, popular enthusiasm for the flag led to the edict being rescinded in 1854.

Every year Danmarks-Samfundet – an independent, non-governmental organisation whose job it is “to strengthen national solidarity … around the national symbol of Dannebrog” – raises money and gives out flags to various associations and groups around the country.

Given the flag’s fabled beginnings and its special place in the heart of the country, the red and white Dannebrog is a distinctly Danish icon and a unique national symbol that doesn’t look like it will be lost again anytime soon. 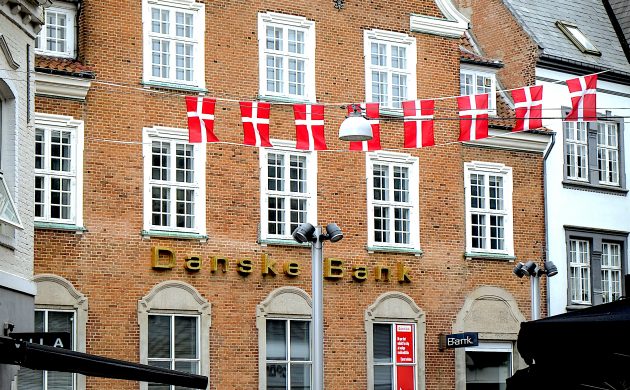