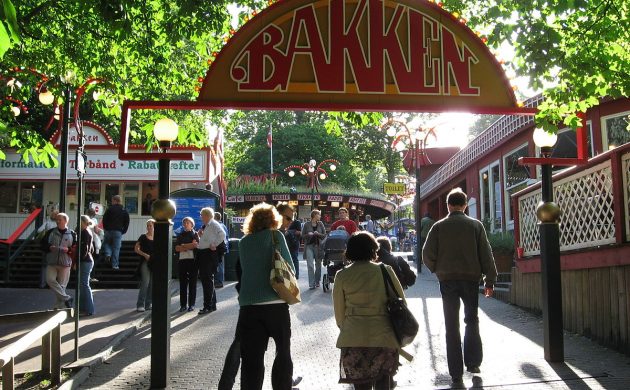 The doors will open, although extra fencing will ensure you might have to queue a little to enter, compared to normal (photo: Erkan)
May 14th, 2020 1:26 pm| by Roselyne Min

Bakken, which as the world’s oldest amusement park is no stranger to seeing off pandemics – including the outbreak of plague in 1711 that saw off a third of Copenhagen’s population –  has confirmed it is reopening on June 8 at 14:00.

The Klampenborg amusement park’s CEO told Mynewsdesk.com that it has “prepared and implemented a wide range of measures that live up to the authorities’ recommendations”, such as distance markings, increased focus on cleaning, and hand-splitting stations.

Tivoli reopening as well
Bakken will also limit the number of visitors using intelligent camera surveillance and fence off more of the area. More information can be found here.

Meanwhile, in related news Tivoli is also planning to open on June 8 as well.

Bang & Olufsen raising capital to survive
Bang & Olufsen, in trouble due to the Coronavirus Crisis, is raising a total of 400 million kroner in capital through a guaranteed share issue, according to a stock exchange announcement. Shareholder approval will be needed in advance and an EGM has been called for June 3, reports DR. The company has the backing of its three largest Danish shareholders: ATP, Chr Augustinus Factories and Færchfonden. Bang & Olufsen was already in crisis before the pandemic. In January, the company confirmed it lost 60 million kroner as revenue fell by 30 percent during its last financial year.

Georg Jensen could be soon run out of money
Georg Jensen has made a loss of 356 million kroner over the last four years, reports BT, including a 48 million deficit in 2019. Its future therefore looks particularly uncertain given the onset of the Coronavirus Crisis, as Francesco Pesci, its CEO, tells Børsen.no that it will go bust if revenue falls by more than 33 percent  this year. The jewellery company was founded in 1904 by the silversmith Georg Jensen and it has 97 stores worldwide – four of which are located in Denmark.

Maersk doing comparatively well
Maersk expects a 20-25 percent drop in freight in the second quarter due to the Coronavirus Crisis, according to its Q1 accounts. Despite the outbreak of coronavirus, which led to a 5 percent decrease in global demand, Maersk came out of the first quarter with a profit of 1.44 billion kroner. Like other shipping companies around the world, Maersk is loading fewer vessels due to lower demand. In the same period of last year, the company reported a loss of 4.5 billion kroner – partly due to activities at its subsidiary Maersk Drilling.

KiMs denied exclusive trademark to produce square crisps
The Danish snack brand KiMs has been denied exclusive rights to produce square-shaped crisps by the Maritime and Commercial Court, reports TV2. KiMs applied to have its ‘Snack chips’ registered as a three-dimensional trademark in 2014. However an objection materialised in 2015, which the company appealed at the Appeals Board for patents. The case was revoked and transferred to the Maritime and Commercial Court. The Snack chip is square and known for its grooved surface.