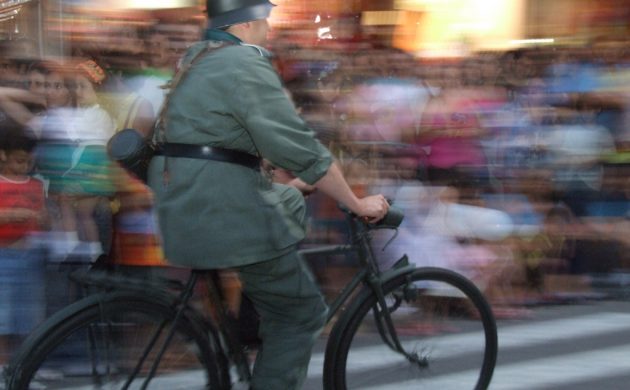 Go ahead and add ‘bicycle thief’ to Adolf Hitler’s pre-eminent CV of evil.

As the 75th anniversary of Liberation Day in Denmark recently came to pass on May 5, it is only fitting to reflect on a peculiar episode in the German Occupation  that struck at the very heart of the country’s pride and lifestyle: the Danish bicycle.

Remember to lock your bikes!
John T Lauridsen, the head of research at the Danish Royal Library, detailed in a 2016 issue of Historik Tidsskrift a power play carried out by occupying German forces in Denmark on 26 October 1944, at the personal approval of Hitler, to seize all on-sale and newly-produced Danish bikes.

It is said to be one of the few cases in which Hitler was directly involved in how Denmark was ruled during WWII. The rationale for the order was to have the bikes available as a replacement form of transport in case of fuel shortages, which were becoming more frequent as the war dragged on.

Danes were furious, with illegal newspapers circulated among the Danish people ridiculing Germans and referring to the stolen bikes as “Hitler’s secret weapon”.

“It’s hard to understand today, but bicycles were central in enabling the labour force to travel around the city and countryside,” said Lauridsen.

Politics behind the scenes
Lauridsen documents the bitter power struggles that went on between the German Army, the Danish branch of the Gestapo, and Werner Best, the German civilian administrator in Denmark.

The German armed forces on 6 October 1944 had instructed the governing authorities in Italy, the Netherlands and Denmark to seize all the bikes, but Best was concerned about the potential for unrest the confiscations would cause in what was then one of the most peaceful of Germany’s occupied countries.

Best bypassed the German Foreign Ministry and lobbied Hitler personally to put a spoke in the wheel and lessen the scope of the bike seizures to only include new and on-sale bikes.

Nevertheless it still stands as the largest bike theft in Denmark’s history, ensuring that 26 October 1944 is a date that will live on in infamy among the Danish cycling population.