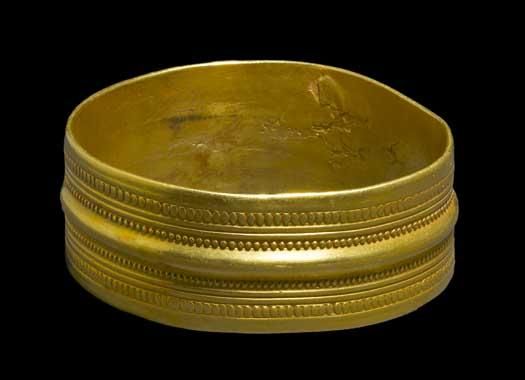 During the Bronze Age valuable objects were deposited in the earth. A new study suggests there may have been an earlier Copper Age before the Bronze Age in Denmark (photo: natmus.dk)
July 1st, 2020 3:57 pm| by Ayee Macaraig and Gulden Timur

Stone Age Danes were not just capable of making simple tools but also mastered the complicated process of melting and working with metal.

This is the finding of a new study by researchers from the National Museum of Denmark who hail the discovery of a copper crucible dating at least 5,500 years old.

“It’s a bit of a sensational find, because it’s Northern Europe’s oldest example of being able to melt and work with metal,” researcher and archeologist Anne Birgitte Gebauer told Videnskab.dk.

Not primitive people
The study was done based on the discovery of a crucible and small pieces of burnt clay in 1988 near Haderslev in Southern Denmark. The researchers’ analysis confirmed that the crucible contained copper, saying that being able to process this copper required special knowledge.

“Therefore, it challenges a view that many may have had of Stone Age people as slightly primitive people. It proves that they could handle a high-tech craft,” said Lutz Klassen, an archaeologist and research director at the East Jutland Museum.

The crucible is more than 1,000 years older than other direct evidence of metal processing in Denmark.

Soya and palm oil imports emit tonnes of CO2
Denmark’s imports of soybean and palm oil have been causing 7 million tonnes of CO2 emissions per year, the University of Copenhagen reports. Its greenhouse gas emissions are then mainly associated with these crops. The university said that countries often do not include the greenhouse emissions of the import suppliers in their sustainability reports. Yet this information is vital: it is exactly these countries that contribute the most to the global carbon footprint. For example, South America and Indonesia, being the largest suppliers of soya and palm oil, allow legal deforestation. Soy and palm oil production is heavily related to the deforestation process.

Jellyfish valuable for sea predators, study finds
Humans may hate them for their sting but jellyfish have proven to be an important food source for other marine creatures. A study by marine biologist Jamileh Javidpour of the University of Southern Denmark found that fish, crustaceans and sea anemones eat jellyfish even if they contain no fats, no proteins and no carbohydrates. Instead, jellyfish have some fatty acids that are “very valuable” to the predators that eat them. Javidpour also explained that animals do not need to spend so much energy eating a lot of jellyfish. The study said that an increasing number of jellyfish are expected to replace other animals as sea creatures’ prey.

Youth strengthened close relationships during lockdown
The coronavirus crisis brought mental health issues to some but many young people used it as an opportunity to even strengthen their close relationships with family and friends. A study from the University of Copenhagen looked into the experience of 33 young students, both Danes and international ones, of dealing with the lockdown. The study shows that many of them were creative and used social media to adapt to the new reality, organising online board game nights, food clubs and Easter lunches. Researches said that their flexibility and resilience were partly due to their generation’s social media savvy.

Sled dogs adapted to Arctic far earlier than thought
As early as 9,500 years ago, sled dogs have already acted as a kind of watchdog in the Arctic. In a new study, researchers at the University of Copenhagen found that the sled dog is older and adapted to the Arctic far earlier than thought. The study was based on DNA extracted from a 9,500-year-old dog named Zhokhov after the Siberian island where it was found. Modern sled dogs such as the Siberian Husky, Alaskan Malamute and the Greenlandic sled dog have the same origin as Zhokhov, the study said. The study also suggested that the Greenlandic sled dog could be the most original sled dog in the world.

Beerchos: Sustainable chips made from beer
People usually have beer with chips but soon, they can also taste chips made from beer. As part of efforts to produce so-called Zero Waste Beer, a spinout company from the Technical University of Denmark is producing sustainable chips made almost exclusively out of residual products from beer production. The company called Science Brew is turning residue with protein, sugar and antioxidants into chips that resemble and taste like nachos, calling them “beerchos”. The product will be launched in autumn and aims to get more value from beer residue, which often ends up as animal feed.

Students develop meter to measure rainwater
Experts have lacked knowledge about how much rainwater flows from roofs and roads and ends up into sewers. Now, it will be possible to measure this after a group of students from the Technical University of Denmark developed a meter. The project won a prize of 25,000 kroner at a technology-based course in the university and will be used to develop a startup business. The students installed the meter at the entrance of a sewer system to record the amount of rainwater that goes in. They are developing prototypes and plan to hone their business idea.

Better test to treat brain cancer patients
A student-developed test could help brain cancer patients avoid unnecessary treatment such as chemotherapy if their body does not need this. Kamilla Kolding Bendixen of the University of Southern Denmark developed the test for her thesis in Chemical and Biotechnology. The discovery aims to determine the so-called fingerprints of cancer cells, allowing doctors to give patients the treatment that will best fight the specific form of cancer that they have. Biotech company PentaBase, which is developing the test, said that the discovery is groundbreaking as it will help experts monitor cancer and other types of diseases over time.