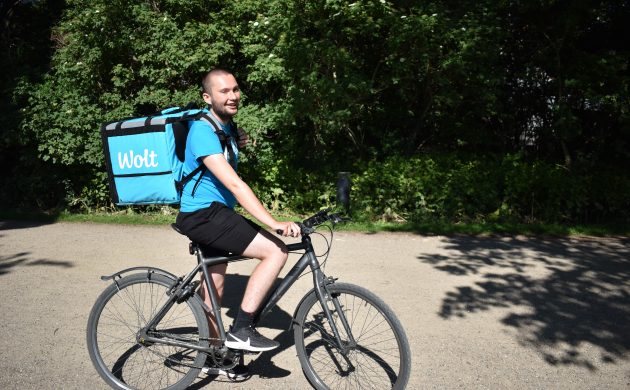 The most common sight on our streets after spandex (photo: Laura Molloy)
July 4th, 2020 5:00 am| by Laura Molloy

Spend a few hours in the Danish capital and you’re bound to see them: the unmistakable blue cubes, emblazoned with the ‘Wolt’ logo, at what seems like every traffic light. A fairly recent addition to the country, they almost embedded into the Copenhagen skyline.

A call for fairness
Established in Helsinki in 2014, the food delivery company has now amassed a workforce of 1,400 in Denmark alone – primarily in Copenhagen. Yet, despite what seems to be positive growth for Wolt, beneath the statistics is increasing discontent among some couriers.

Formed in late 2019, the Wolt Workers Group (WWG) has already garnered mass attention amongst the Danish public for its mission to secure improved working conditions.

In a few short months, the group has paved the way for communication between trade union 3F and Wolt, as well as creating a petition with over 240 signatures, which demands Wolt to provide its riders with fair treatment.

The petition firmly states that although staff enjoy the work and are grateful for the opportunities provided, they are experiencing what they deem unequal conditions in comparison to the average worker in Denmark.

Hidden costs
The prospect of a job that doesn’t require immense knowledge of the Danish language is alluring for foreigners entering the city for the first time, providing an easy opportunity for flexible employment.

For British student and key organiser Jack Campbell, 25, this was a crucial factor in his initial application, alongside the chance to make “a bit of extra money” to offset high rent prices in the city. But after beginning his employment with Wolt in January, Campbell began to notice the platform “cutting costs” with couriers.
Wolt couriers are recognised as independent partners, thus putting them in the category of self-employed. But Campbell claims that for newcomers to Denmark, this poses great difficulty.

“And there’s a lot more that we have to pay out of our wages. You need a really expensive data plan to travel around the city, a helmet and vehicle maintenance, and bike lights and stuff like that.”

Hard to get the hours
These expenses are a primary focus of the WWG, alongside the lack of job security due to a highly competitive shift system. The average pay for workers is 45 kroner per delivery, which increases to a guaranteed minimum of 120 kroner per hour if they manage to book a shift.

However, due to the large number of workers, Campbell describes the great difficulty in acquiring one: “They’re released twice a week and gone in under 30 seconds. I was quite shocked when I first tried to get shifts and it was impossible – none of that was mentioned at the intro events.”

“There are very few hours in the day when Danes order food. The amount of orders Friday night is very high so there’s a lot of courier partners working, but Tuesday afternoon it’s very low,” he explained.

Flexibility and freedom
Svendsen argues that there simply isn’t the business to warrant full-time employment, insisting that Wolt champions “flexibility and freedom” – for couriers and restaurants alike: “It’s less predictable and can be less beneficial if you’re looking for a 40-hour contract.”

Svendsen asserts that not all 1,500 couriers are discontent and that there are challenges in making everyone happy. In a recent survey, 88 percent of workers said they were happy overall in their employment with Wolt, and two-thirds said the high flexibility was a primary point of satisfaction in their employment.
Takeaway business boomed during the lockdown, with PM Mette Frederiksen encouraging Danes to continue to patronise their local restaurants.

For a delivery service like Wolt, being defined as ‘essential’ meant big profits, with a 20 percent increase in orders on the app – the profits of which have since been paid back into partner restaurants to assist them in surviving the crisis. For couriers, this meant a rise in shifts and, therefore, income.

Insurance an issue
Though lockdown meant busier shifts for couriers, the WWG wasn’t satisfied with Wolt’s protection of staff during the period. Despite the introduction of insurance for workers with the virus, Campbell argues that it wasn’t enough: “You had to prove you had it, which was hard when testing wasn’t available, and it didn’t cover your salary completely.”

Much of the WWG’s argument stems from the deficiencies in protection if a rider’s health is compromised, as being self-employed means there is no sick pay provision like with traditional employers.

“They brought in a form of insurance we can use if we have an injury at work, but it’s based in Belgium and really complicated to use as it doesn’t cover financial losses from not working,” explained Campbell.

“From what I understand, most other platforms have Danish insurance that is meant to be pretty comprehensive, and Wolt have just used this really cheap insurance to save costs, which puts couriers at quite a lot of risk.”

However, Wolt argues that insurance is primarily the responsibility of the courier as a freelance worker – due to the high level of gross earnings and freedom received.

“We wanted to make sure that however a courier handles insurance, they are covered in case something happens during the time they are online and get them quickly back on their feet,” contended Svendsen.

Regular meetings
Campbell is involved in assisting Wolt employees who may be unsure of their rights. At weekly meetings we provide free information in regards to the Danish tax system, CPR numbers and other advice that individuals may have difficulty in acquiring alone. And they also encourage discussions among couriers as to how Wolt may be improved in the future.

“A lot of couriers really value the flexibility and the fact you can swap shifts and work when you want, but there is a lot to learn about your rights and what Danish working conditions should be,” reasoned Campbell.

As negotiations between 3F and Wolt continue, it seems demands for change have not fallen on deaf ears.

“We share the ambition about making it better and better every day but we just need to do it in a way that respects the ones who like this way of working, which is why we listen to both parties,” insisted Svendsen.

“The answer to whether we can employ a courier is that it’s not out of the question sometime in the future. In order for us to do that we need to look at the broader picture and understand what that would mean for all courier partners.”

Important precedent
Wolt now faces the challenge of navigating increasing demand for workers’ rights, whilst maintaining the flexibility that is a key part of their brand – as well as a key incentive for many couriers.

Seemingly, both sides are in agreement in regards to maintaining flexibility, with meetings between the two parties displaying positive progress.

But for Campbell, these negotiations represent a crucial turning point, as this new kind of employment begins to sweep over Denmark.

“It’s good and it’s important that the unions and Danish people are thinking about how to approach this kind of work,” he said.

“It’s likely other platforms might come to Denmark, so this kind of self-employed status must be challenged before it grows.”

Negotiations will continue over the coming months, but until an agreement is reached all eyes will remain on Wolt and WWG to see if a precedent is set for the future of courier services in Denmark.