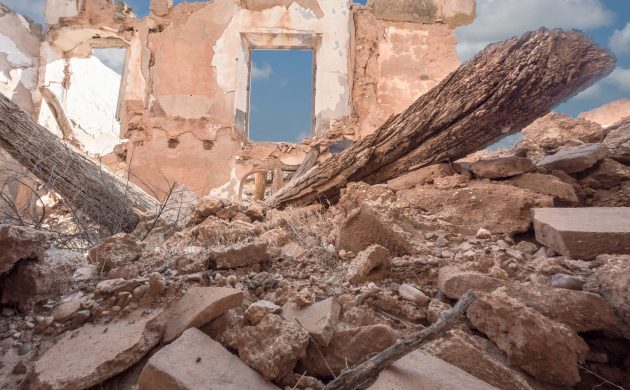 Syrian film director Feras Fayyad’s Danish-produced “The Cave” has been nominated for no less than four Emmy awards. The awarding ceremony will take place on September 20.

“The Cave”, a documentary about the Syrian war and which was also nominated for an Oscar earlier this year, is directed by Fayyad and produced by Sigrid Dyekjær and Kirstine Barfod from Danish Documentary Production A / S.

The film had its world premiere at the Toronto Film Festival in 2019 where it won an audience award. It has since been honoured at the American documentary film festival Cinema Eye Honors with awards for Ballour, Barfod and Dyekjær.

Tale about a strong woman
The film is about a female doctor Amani Ballour who, under difficult conditions, runs an underground hospital in the Syrian province of Ghouta. The story is about a young woman who wants to change a male-dominated environment so Sigrid Dyekjær and Kirstine Barfod have called the film “a feminist tale”.

Fayyad’s team followed Ballour between 2016 and 2018 and documented the daily life of the hospital – from the horrific to the mundane – to give an insight into the lives of people trapped in the war.

“The Cave” is produced by Danish Documentary with support from the Danish Film Institute, TV2 Denmark, National Geographic and IMS International Media Support, among others.

The film had its Danish cinema premiere in January. The Danish TV premiere will be on TV2 later this year.

Debut film Shorta selected for Venice Film Critics’ Week
Danish action drama “Shorta” by debuting director duo Anders Ølholm and Frederik Louis Hviid will be screened in the Venice Film Festival’s Critics’ Week as a tribute to the emerging talents. The side panel runs parallel to the festival’s official competition starting on September 2. “Shorta” follows two police officers on a patrol in the Svalegaarden ghetto after the news about the death of  19-year-old Talib Ben Hassi ignited rage among the ghetto’s youth. The film is produced with support from the Danish Film Institute, Creative Europe and DR. The domestic premiere is set for October 8.

National Museum says goodbye to ‘Eskimo’
The National Museum will drop the word “Eskimo” in its Arctic exhibition “Eskimos and Greenland”. According to museum curator Martin Appelt, the use of the word might be perceived by some as “derogatory”. “Eskimo” has been deemed to be offensive, and the term “Inuit” is preferred by people in northern Canada, Alaska and parts of Siberia. Aaja Chemnitz Larsen, who represents the Greenlandic party Inuit Ataqatigiit in the Parliament, has also called for dropping the use of the word. Despite the decision by the National Museum and Hansens ice cream company to stop using the term, the largest ice cream producer Premier Is has however chosen to stick to the name.

Louisiana Museum presents Fantastic Women
The Louisiana Museum of Modern Art presents “Fantastic Women – Surreal Worlds from Meret Oppenheim to Frida Kahlo”, a large-scale exhibition of female surrealists who have been overlooked in history. With more than 260 works, it provides an insight into 34 female artists from Europe, the United States and Mexico and their approach to surrealism. Along with the well-known names of Louise Bourgeois and Frida Kahlo, artists such as Kay Sage, Leonor Fini and Toyen are presented for the first time in a Danish context. In addition, the Danish and Swedish surrealists Rita Kernn-Larsen, Greta Knutson and Elsa Thoresen are presented. Fantastic Women is organized by the Schirn Kunsthalle in Frankfurt in collaboration with Louisiana.

Sunday outdoor readings by the House of International Theatre
The House of International Threatre ensemble cast members and colleagues present a series of four outdoor staged readings. Four exciting plays by contemporary American playwrights will be read in English from July 19 at Nørrebroparken. All four plays are in a comedy, dark comedy genre. They have different themes and settings but all of them are about women and relationships. The readings are free and do not require booking but donations are welcome.

Danes feel young at heart – survey
In collaboration with YouGov, the Golden Days festival conducted a survey among Danes. The result shows that 67 percent of Danes over the age of 18 feel young. In relation to what it means to be young, Golden Days organised a 17-day festival themed “Forever Young”, book series and free admission to museums for young people across the country. It will be held from September 4 to 20. There will be more than 100 events throughout the metropolitan area.