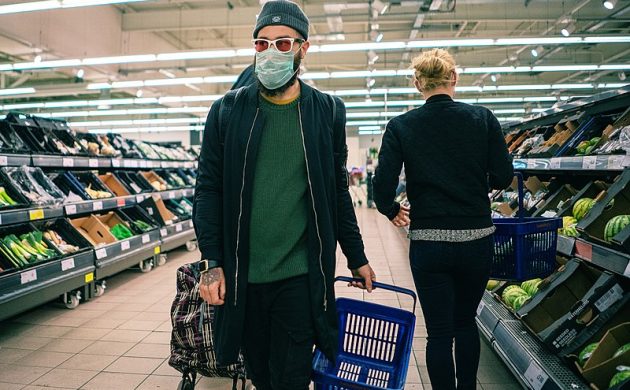 More time at the supermarket, but less to spend (photo: Flickr/Nickolay Romensky)
August 15th, 2020 11:38 am| by TheCopenhagenPost

From Saturday 22 August, it will be compulsory to wear facemasks on public transport across Denmark, PM Mette Frederiksen just confirmed at her first coronavirus press conference in over two months.

“Corona infections are rising. We can see this in many other countries and unfortunately also here at home. It requires action,” she reasoned.

Frederiksen could not rule out further public orders: for example, to wear facemasks in supermarkets and within the healthcare arena.

Earlier this week, facemasks became obligatory on public transport in Aarhus and five other cities in Jutland.

Nightclubs offered loophole
The press conference today came within 12 hours of an announcement last night that MPs have reached an agreement regarding Phase 4, which is due to be implemented next Monday.

While the limit on public gatherings will not be raised from 100 people, the six-day rule for tourists will be relaxed, meaning they will now be able to enter Denmark to spend the weekend.

Furthermore, bars and restaurants will be permitted to stay open until 02:00 providing they don’t admit guests after 23:00, but nightclubs will have to wait until October 31.

However, nightclubs have been offered a loophole. If they satisfy requirements that they are technically a bar, they can reopen.