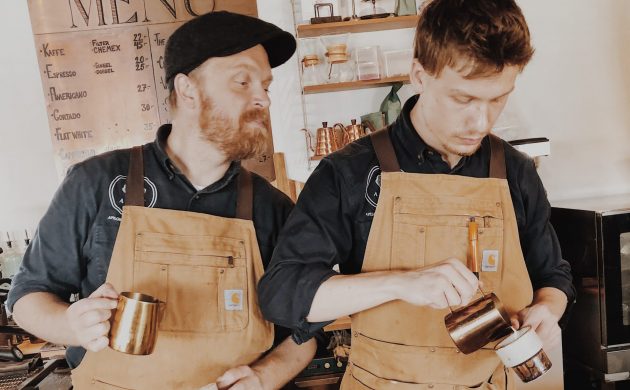 Owner Rasmus Jordt takes a keen interest in every element of the business
August 23rd, 2020 5:00 am| by Amy Goodman

Coffee is a staple in the cupboards of many Scandinavians. The drink plays a huge role in the social culture of Danes and Swedes – something that has recently garnered attention from foreign media. Books, articles, events and interiors have all been inspired by Nordic coffee culture and traditions such as ‘fika’, which lies at the heart of its essence.

Behind the scenes, however, coffee production is an industry dominated by a handful of main players with a poor track record when it comes to the welfare of their farmers.

Yet, in the small town of Ebeltoft in east Jutland, the coffee house and roastery ‘Apelgren Jordt Coffee’ is using Danish coffee culture to challenge this 81-billion-dollar-a-year industry.

Supply chain control
After 20 years in the industry, owner Rasmus Jordt sees more than most when looking at a cup of coffee. Roasting the coffee himself, he has taken control of the supply chains and buys from the farmers directly.

This approach ensures the farmers a better price and gives both sides a chance to work most effectively.

“We will pay 70 percent of the price upfront before harvest,” explained Jordt.

“This ensures for the farmers beforehand that they can hire the right pickers. If they need something, like extra access to water or a new machine, we help them.”

Communication is key
Apelgrens goes beyond financially supporting their farmers. Having grown up in east Africa to Danish parents, Jordt is frustrated by the standard of communication between western companies and their suppliers.

“It’s very easy for us in the West: the way we trade, the way we are brought up to work in business, and the way we negotiate a price and negotiate a time. What I’m really interested in is how do we get everyone to connect at a level where everyone is happy,” he said.

“We are not safeguarding the farmers in any way. Whereas, if we actually understood their situation, we could ensure them a better quality of life – in so many more ways than just [giving them] money.”

Understanding communities
A lack of understanding of cultural nuances, and generally between farmers and buyers, is a major obstacle to progress that Jordt wants to see eradicated in his industry. Companies often go into communities with grand offers of educational systems, he contends, which are not needed and ignore the more pressing issues farmers face.

Instead, Jordt urges more focus on the bigger threats to the farmer’s quality of life that are often ignored or unknown. Currently, he explains, land ownership in small farming communities is becoming a big problem in need of a solution.

“In some areas, if you have a coffee field and you die, your sons inherit it, but it’s split between your two sons,” he said. “And then when one of your sons dies, it is split between his two sons. We keep on splitting up the land, so you basically don’t have land to live off in the end.”

Empathy with the farmers
Religion and superstition is another aspect of the farmers’ lives that western buyers tend not to understand. In East Africa, for example, cultural nuances mean that buyers can greatly affect communities if oblivious to social paradigms.

“If I as a coffee buyer go into a coffee community, but I only support one field, then there might be five other farmers who have fields who aren’t making the same amount of money,” continued Jordt.

“In their head, the reasoning behind it is not necessarily because their quality of coffee is better, but that they might be using magic to ensure their crop. If we don’t understand that as professionals going into their market, we will never make it better.”

It all starts at home
Apelgrens’ humility and cultural sustainability extends back to Denmark. When opening in Ebeltoft it was important for Jordt to collaborate rather than compete with other independent businesses, and now he sells local products at the shop to boost his fellow artisans.

“Ebeltoft is a city of craftsmanship, and I think we need to carry that tradition proudly,” he said.

This humility has led to Apelgrens becoming loved by the community – so much so that when the coronavirus hit Denmark it actually sold more coffee than pre-covid.

Saluting their work
Despite the tremendous impact that Apelgrens is having on the lives of its farmers, the work done behind the scenes is unknown by most customers. Jordt is keen for the coffee to be the focus, because his sustainable mindset is not about image, but about the people he works with.

The majority of the world’s coffee is produced by 25 million small farms, which are rarely given an even playing field when it comes to negotiations.

Sitting with a picturesque view of Ebeltoft’s harbour, a coffee from Apelgrens tastes even better knowing how the beans got there.