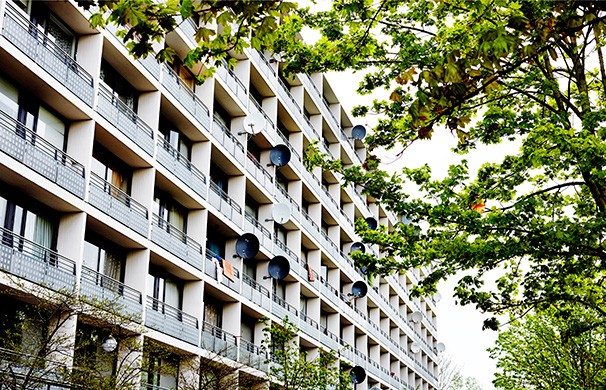 Some neighbourhoods could join the list because of an unemployment dip caused by the coronavirus (photo: Kraks Fond Byforskning)
September 23rd, 2020 8:17 am| by Ben Hamilton

Right-wing party Dansk Folkeparti would appear to be having a rethink regarding the so-called Ghetto List, a controversial, annually-reported line-up of Denmark’s most vulnerable neighbourhoods, which normally totals between 25 and 30.

And DF would appear to have the support to two unlikely bedfellows from the left: Enhedslisten and Radikale.

Perhaps it is time, the three parties reason, to put the Ghetto List on hold this December, when a new line-up is expected from the Ministry of Transport and Housing.

Even though their reasons for supporting a timeout are different, they also agree on several issues as well.

Moving criminals into decent neighbourhoods
Peter Skaarup, the DF group chair, is worried the new Ghetto Law, which came into effect at the beginning of 2020, is not working.

It advocates the relocation of tenants and their replacement by ordinary citizens, alongside other initiatives, such as the forced education of children and demolishment of housing. But Skaarup has noted with alarm that similar measures in the Netherlands have not been working.

“We can see some terrible examples from there, where the criminals just move from the ghettos and into ordinary settlements among ordinary citizens,” he told DR.

“That’s not what we want with a ghetto effort. We would like to give it some breathing space so we can look at the results of the current initiatives. We should not be just moving on the problems.”

Instead, Skaarup believes more efforts should be made to deport criminal immigrants and stop mosques being established before moving more residents out of the ghetto areas.

Fine margin between a ‘ghetto’ and an upcoming area
Meanwhile, Enhedslisten and Radikale are concerned more areas will be added to the Ghetto List because of rising unemployment due to the coronavirus, and that homes will be demolished in perfectly good areas where ten newly jobless people tipped the balance.

Already there are plans to demolish homes in 15 areas, including Vollsmose, Mjølnerparken and Gellerupparken. Two areas in danger of joining the list are Solbakken and Korsløkkeparken in Odense, and Radikale leader Morten Østergaard recently visited the latter.

“It is absurd if such an area, which has undergone a billion-kroner renovation, is about to demolish homes because some have been unfortunate enough to lose their jobs as a result of the corona epidemic,” he told DR.

The two parties have been rallying local politicians in the country’s three biggest cities to lobby the housing minister, Kaare Dybvad Bek.

Meanwhile, other parties are leaning more towards the introduction of exemptions for the Ghetto List. Inclusion is based on four criteria, relating to ethnicity, income, employment and the average age the tenants completed their education.