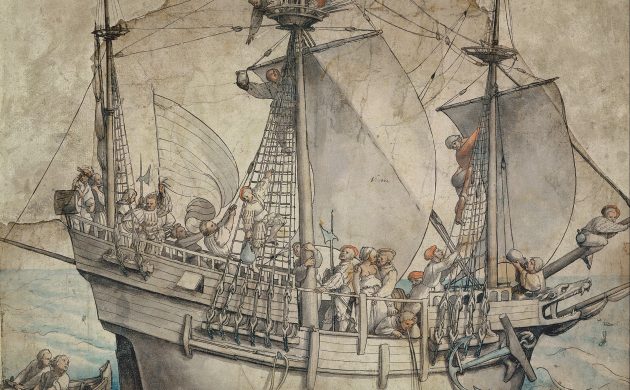 The downside of ships back then was that they made excellent kindling (photo: Hans Holbein the Younger)
October 1st, 2020 1:05 pm| by Ben Hamilton

As far as medieval conspiracy theories go, it’s right up there with what really happened on the White Ship that sank with the heir to the English throne onboard in 1120, was Joan of Arc actually a man, and who really faked the Shroud of Turin.

Back before Novichok
This one is a Scandinavian sizzler that has been perplexing historians for over 500 years – which probably explains why Ken Follett hasn’t jumped on it yet for another Middle Ages romp, but give him time!

Like most destructive events in those days, it involved fire and possible regicide.

But the cause of the blaze – which consumed the Danish king’s 35-metre long ship, Gribshunden (griffen hound) and sent it and most of its occupants to the depths of the Baltic in 1495 – remains unknown.

King Hans was fortunately not onboard at the time as the ship was anchored off Ronneby near the southeastern tip of Sweden.

Together with the Danish fleet, the Gribshunden was taking the king to high-level negotiations with the Swedish regent Sten Sture the Elder.

Pesky ‘stone’ in king’s shoe
Sten was a constant thorn in the side of the Kalmar Union set up by Danish Queen Margaret I in 1397, which Sweden would eventually leave in 1523 after playing second fiddle to the Danes for 126 years.

Was that motive enough to assassinate the Danish king, or was it possibly even an inside job orchestrated by Hans to avoid meeting Sten?

After all, the next time they met was across the battlefield two years later. In the meantime, peace was the last thing on Hans’ mind. He backed a failed Russian invasion of Finland, influenced the Swedish nobility’s ejection of Sten as regent, and then marched to Stockholm to engage him.

With only peasants in his ranks, Sten was no match for the Danish forces.

Fluff divers
It was with great excitement, therefore, when archaeologists learned of the wreck of Gribshunden in Swedish waters in 2000. It had been discovered by a local diving club in the 1970s, but they hadn’t thought to tell anyone!

And in 2015, the wreck garnered worldwide attention when the almost perfectly preserved ship’s figurehead was brought to the surface. As the ship’s name suggests, it is a crocodilian-like dog, with human remains protruding from its  teeth.

Its eyes are somewhat closed, like it is the bearer of a great secret: would its embers finally resolve what happened aboard its timbers on that fateful day in 1495?

The remains of an enemy missile, perhaps, or the fag-end of whatever they used to smoke before Sir Walter returned with some finest Virginia?

A fish for fanden!
Five years passed … and nothing. Sure, they’ve found chainmail, crossbows, bones, glass and capstans, and a few historians are excited because the ship was made in the same era as Christopher Columbus’s most famous vessel, the Santa Maria.

But the best they can come up with in the area of conjecture is why was there a two-metre Atlantic sturgeon onboard in a barrel?

Lund University believes the fish, a huge delicacy at the time and quite prestigious, was a “propaganda tool” – a sign of status heading to the Kalmar Union negotiations, and even a possible gift for the Swedish regent and court.

The Danish National Museum disagrees, calling Lund’s suggestion “absurd” according to videnskab.dk – a retort straight out of the Mette Frederiksen playbook, used recently to turn down Donald Trump’s offer to buy Greenland.

The sturgeon, claims the museum, was just as likely being kept for the king’s `fish supper.

Aha … but why didn’t Hans take it with him when he abandoned ship? Like most conspiracy theories, there’s clearly something distinctly fishy going on.