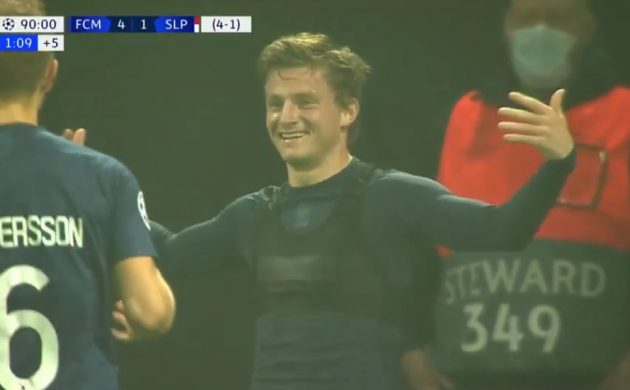 Anders Dreyer helped turn the tide in the second half (photo: screenshot)
October 1st, 2020 8:08 am| by Christian W

For the first time in club history, FC Midtjylland has reached the Champions League group stage.

And what a way to do it.

Despite going behind after just 3 minutes, the Wolves fought back in the second half to win 4-1 over Slavia Prague in Herning.

With the score at 1-1, the final ten minutes were about as exciting as can be.

A VAR check on a handball in the box led to a penalty for FCM, but Sory Kaba -scorer of the equaliser earlier in the half – missed.

Fifth club in history
But wait! VAR wasn’t finished for the night, and the referee ordered a retake of the penalty because the keeper left his line too early.

Alexander Scholz put away the second attempt and FCM added two more late on counters to win 4-1 on the night and on aggregate.

It is the first time since FC Copenhagen in 2016 that a Danish team reaches the Champions League group stage.

Later today, FCK can join FCM in Europe if they beat Croatian side NK Rijeka tonight in the Europa League playoff in Copenhagen.

Danish teams in the Champions League