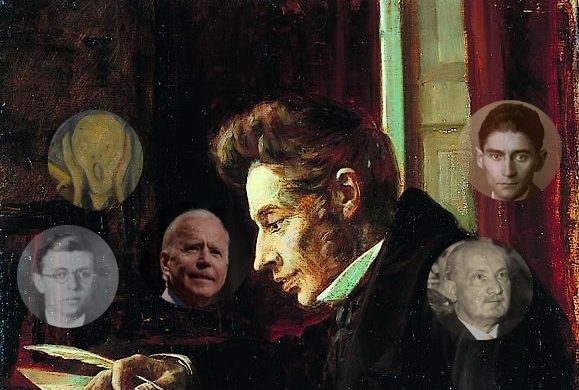 When Joe Biden repeated his oft-used quote “Faith sees best in the dark” while accepting the Democratic presidential nomination on August 20, he invoked the works of a philosopher held in high regard in his home country, but frequently overlooked abroad.

The quote, which Jill Biden allegedly has taped to the bathroom mirror, is one of Søren Kierkegaard’s. The Dane is hailed by many as the ‘father of existentialism’, but often it is his successors that steal the limelight. Despite this, influential figures the world over owe much to his insights into the trials and realities of human existence.

For Biden, a man whose life has been marked by personal tragedy and loss, it is no wonder he finds great comfort in the words of a philosopher devoted to the exploration of human suffering, the value of commitment and the glorious irrationality of faith.

At a time when US politics is gripped by animosity, ‘fake news’ and distrust, there are perhaps worse things to cling onto than the idea that suffering brings its own reward.

A child’s suffering
Kierkegaard’s works are imbued with melancholia (Lars von Trier’s film of the same name is well named), and his personal experiences have significant relevance to his writings. Though generally an uneventful life – leaving Denmark only five times – he had a childhood marked by tragedy.

Kierkegaard firmly believed that neither he nor any of his six siblings would reach their 34th birthday (the age at which Christ was crucified) – a prophecy that unfortunately proved correct for five of them.

It was a belief inherited from his father, who believed himself cursed, and who also passed on his temperament and dour Lutheranism to his youngest son, before, that is, Søren railed against organised religion.

Scandi blues
The story of childhood trauma is repeated by some of his most famous Scandinavian successors.

World-renowned Norwegian artist Edvard Munch also suffered a childhood riddled with the tragic. His mother died of tuberculosis when he was just five years old, and his sister followed when he was 14 – victims of a disease he himself suffered from. Emotional turmoil is ever-present in his work: most obviously in ‘The Scream’ and ‘The Dead Mother’ – paintings which share the same tormented figure.

It is clear in the case of Munch that he stands as a continuation of the exploratory work pursued by Kierkegaard. His paintings show not only sweeping Scandinavian landscapes, but also map the internal realm, with figures transfixed in moments of psychic torment, confronting both their situation and their freedom in a ‘Kierkegaardian Moment’.

Ibsen, the famed Norwegian playwright, has a similar tale: a childhood defined by a family’s descent into destitution, with a subsequent oeuvre typified by melancholy and suffering.

Upon its release, Ibsen’s ‘Brand’ was hailed as a dramatic telling of Kierkegaardian philosophy. The title character is of a distinctly Kierkegaardian mould. More specifically, he is an ethical character according to Kierkegaard’s definition and driven by the choices he makes. He commits to a decision despite it resulting in the sacrifice of his son – a clear echo of the decision Abraham faces in Kierkegaard’s ‘Fear and Trembling’.

The knight in the castle
Childhood trauma was not the only defining incident in Kierkegaard’s life, nor a prerequisite for those influenced by him. Another event that came to permeate Kierkegaard’s works was the breaking off of his engagement to Regine Olsen.

Despite continuing to be wildly in love with his fiancee, he came to the conclusion he would never make an adequate husband and so, despite her pleas, called off the wedding. Later, the theme of a young man being ‘poeticised’ by the appearance of a young woman came to appear regularly in his works.

It is for this reason that Franz Kafka initially found in Kierkegaard a kindred spirit. He broke off his engagement to Felice Bauer, not once but twice, and this shared experience initially led Kafka to Kierkegaard. But soon he came to see his relationship with Kierkegaard as one not of equals but as of admirer and admired. In correspondence, Kafka claimed that he had “really lost his way” in the Dane.

The melancholic tone of Kafka is drawn certainly in part from that of Kierkegaard, but also important is his regard for the philosopher’s terminology and concept of movement: the dynamic shift from resignation to faith, as well as from giving up to receiving – a concept clearly put into practice in their romantic lives.

Condemned to plagiarise
According to Jean-Paul Sartre, it was “through the atmosphere of Kafka that the French got access to Kierkegaard”, and the Frenchman, to whom most are probably quickest to attach the existentialist label (despite his own rejection of it), owes a great deal to his Danish forerunner.

More striking is the appearance of the phrase ‘being and nothingness’ – the title of Sartre’s magnum opus – verbatim within Kierkegaard’s work. Perhaps it would be unwise to draw strong conclusions from this in light of the various degrees of translation by which the two figures are removed, but less controversial is his inherited concept of vertigo …

Kierkegaard, in his description of anxiety and human freedom, presents the case of a man  at the top of a cliff who does not fear he will fall, but that he might instead jump. This example is lifted with only minor alterations into Sartre’s work and described as ‘vertigo’. It is a passage that has become famed for its evocative lucidity, though its original espousal rarely earns the same acclaim.

Leaping the pond
A string of modern US authors also owe a great deal to the Dane. ‘The Catcher in the Rye’, one of the most eminent novels of the last century, follows the tale of Holden Caulfield through his struggles to understand himself and those around him.

With a disgust of ‘phonies’ – those around him who he sees as non-committal and aimless – he embodies the Kierkegaardian themes of decisiveness, commitment and responsibility. It is a story of psychic torment and an individual’s confrontation with his own mode of being, which unfortunately played a part in a loner’s assassination of John Lennon.

More explicit in his debt to Kierkegaardian philosophy was John Updike, a prolific author and critic. In this latter role, he reviewed a biography of Kierkegaard’s life as well as ‘The Seducer’s Diary’, part of Kierkegaard’s first published work, ‘Either/Or’.

In ‘My Father’s Tears’ he describes a process through which the protagonist is forced to confront the precise moment in which he abandons his past and his father. The character goes on to judge his father-in-law for not having made the ‘leap-of-faith’ – after all, he had read his Kierkegaard – before being embroiled in a failed marriage. Nods to the Dane are far from veiled.

In America, as in Europe, Kierkegaard has certainly left his mark. At a time when tensions are high and words seem without meaning, why wouldn’t Americans turn to some other, more abstract judgement in the run-up to another heated election? After all, if there were no higher point of reference by which to judge our earthly existence, “What would life be but despair?”