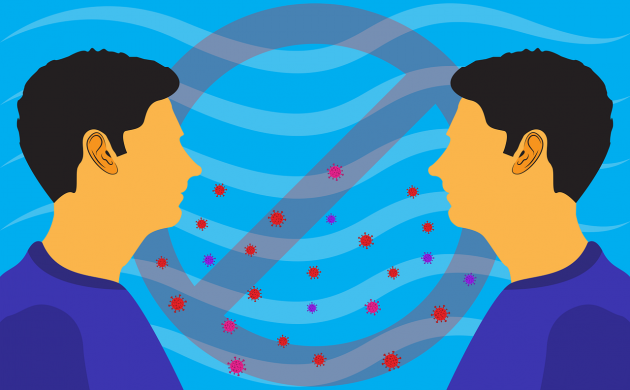 Despite previously rejecting the idea that people can be infected by COVID-19 micro-droplets in the air, the Danish authorities have now acknowledged its viability as a form of transmission.

Ventilate your homes
Updated guidelines from the National Board of Health include new passages on ‘air exchange and ventilation’ in efforts to limit the spread of coronavirus in indoor environments.

As the winter weather drives more Danes indoors, the board recommends frequent ventilation in order to reduce the spread of infection in this way.

Updated US reports
It follows an update from the Centers for Disease Control and Prevention in the US that states infection can be caused by exposure to micro-droplets up to two metres away, which can linger in the air for several hours.

Close contact with an infected person is still believed to be the primary cause of the spread of infection.

Copenhagen from the clouds
Researchers from the University of Copenhagen have shed new light on the formation of thunderstorms and downpours. The new study investigates the impact of temperature change between night and day on the likelihood of the emergence of large thunderstorms. They found that where the temperature difference is large, more powerful storms are likely to emerge.

Slimy future for foodies
More sustainable eating habits are going to force us to reconsider our food sources according to researchers at the University of Copenhagen. In particular, they recommend we look to the bottom of the oceans – to sand-eels, sprat, and cuttlefish – for the foods of the future, as well as the thousands of currently ‘overlooked’ algae and seaweed species. Food production is currently one of the biggest contributors to climate change, and these new options are being held up as low-CO2 alternatives.

Digitised heating drives down financial and environmental costs
For the millions of households in Denmark hooked up to district heating, data and forecasts are being utilised to better regulate temperature controls. DTU researchers apply AI to predict the demands that will be placed on the heating system in order to more accurately suggest output and potential system failures. With less strain on pipes and infrastructure, it is hoped the new development will drive down prices as well as reduce the environmental impact of heating your home.

Muscle memory
A healthy lifestyle comes close to halving the risk of age-related dementia, according to new research from the University of Copenhagen. To date, there is no medication capable of curing or reducing the risk of dementia, but the new study reveals that following advice related to the reduction of cardiovascular disease goes a significant way to doing just that. The results were drawn from the data of 62,000 individuals.

Simple solution to oxygen depletion in Denmark’s waterways
Every summer, oxygen in Denmark’s lakes and coasts is lost as higher temperatures bring about oxygen-gobbling bacteria. Over the next few years, however, researchers from DTU will explore the possibility of using electrodes to ensure higher oxygen content near the seabed by transferring the electrons released by the bacteria to the surface.

Nordic team examines energy consumption in public buildings
Aarhus University researchers and Region Kristiansand are joining a team led by Lund University in efforts to reduce energy usage in the operation, renovation and construction of public buildings. The exchange of experiences across the Nordic nations is hoped to provide improved solutions across the region in the future.