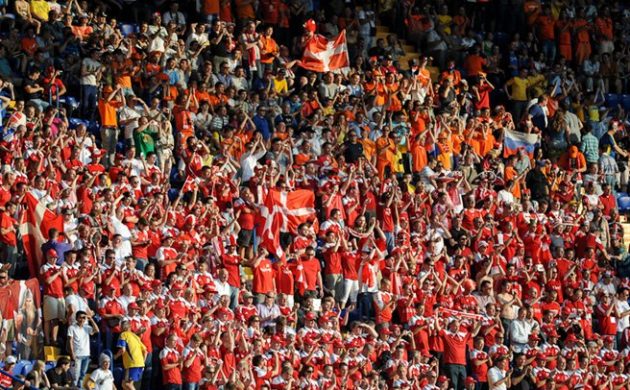 Crowds will be unable to cheer like this when the two players take to the pitch tomorrow evening (photo: Dmitrij Nejmyrok)
October 13th, 2020 1:57 pm| by Luke Roberts

For two players, Denmark’s match against England on Wednesday will provide something to celebrate regardless of the result at the final whistle.

Both Christian Eriksen and Simon Kjær will make their 100th international appearance, joining an exclusive club of footballing heroes from the country.

Danish hall of fame
Coach Kasper Hjulmand praised their achievement, stating that the two of them “are of course placed up there among the greatest of all time”.

The huge number of appearances is testament to both their talent and their commitment to the national cause.

Closing in on ‘Great Dane’
Peter Schmeichel is currently Denmark’s most capped player with 129 appearances, followed closely by Dennis Rommedahl on 126, and Jon Dahl Tomasson on 112.

At just 28 years of age, it is likely that Eriksen will soon be hot on the heels of these international stars.

Icemen when they need to be
Their 99th caps came in Sunday’s 3-0 victory over Iceland. The squad was captained by near-centenarian Kjær, whilst Eriksen also showcased the talents that have got him this far as he got on the scoresheet.

The result sees Denmark retain third spot in the Nations League Group ahead of their match against league leaders England tomorrow night.

Young tennis star flies up rankings
Following a successful run in this year’s French Open, 17-year-old Clara Tauson has advanced 33 spots in the world rankings to take 155th overall: her highest position to date. In the tournament, Tauson was victorious in three qualifiers and her first match in the main tournament, defeating Jennifer Brady, a semi-finalist at the US Open.

Under-21s come from behind to edge closer to European qualification
In what looked to be an easy fixture before the match, the Danish U21s were made to work for victory over minnows Malta – coming from behind to win 3-1. With two games still to play, Denmark sit top of their group and six points ahead of second-placed Romania, meaning just a single point is now required to guarantee qualification. They play Finland today in the penultimate game of their qualifying campaign.

Sverri Nielsen sculls to European gold
Poland is this year’s host of the European Championships, and in Poznan on Sunday rower Sverri Nielsen secured gold for Denmark in singles sculls. It was the first regatta for a year for the Faroese rower who competes for Denmark, and hopes were high after a World Cup silver in 2019.

Mads Pedersen pedals to victory in Belgium
Finishing ahead of some of cycling’s biggest names, Mads Pedersen came out on top in the Gent-Wevelgem, a gruelling 232.5 km race in Belgium. It is Pedersen’s second victory since Julian Alaphilippe stripped him of the world champion’s jersey, and it is the first Danish victory in the Belgian race since 1995.

Casper Pedersen cycles to career high
On Sunday, Danish cyclist Casper Pedersen claimed first place in the Paris-Tours, a one-day race across France. In the same race fellow Dane and Sunweb teammate Søren Kragh Andersen crashed out with 50 km to go. The result is the biggest of Pedersen’s career so far. “It’s a huge victory for me. I have felt in really good shape since the Tour, so I was really motivated to get something out of this last part of the season,” he said.

Mountain bike legend calls time on career
After ten years and six world championship victories, Annika Langvad has announced her retirement from professional cycling. In a post on Instagram, the mountain biker signalled her eagerness to “indulge in other things in life” after a hugely successful if “intense” few years in the sport.

Unlucky for some
On a day when Lewis Hamilton equalled F1 legend Michael Schumacher’s 91 grand prix victories, Kevin Magnusson finished outside the points in 13th place after starting in 11th on the grid.