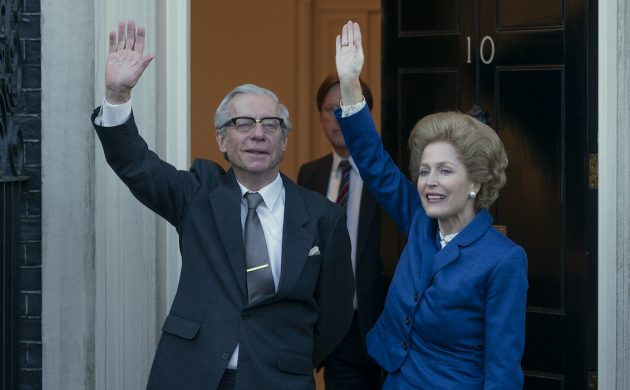 Is it any wonder we’re obsessed with figures of hate from the 1980s – the very decade whose excesses are blamed for many of our problems today?

Thorny crown to wear
There’s Margaret Thatcher, of course, who Gillian Anderson will be portraying in season 4 of The Crown (Netflix, Nov 15). At the announcement of her casting, there were many men of a certain age who became worried they might find Anderson attractive in the role, such is the level of continued hate they still hold for a woman who died in 2013.

And then there’s Dennis Nielsen, the serial killer from north London who, beginning in 1978, killed at least 12 gay youths and men up until 1983. With their bodies hidden away, and LGBT welfare not particularly high on the police or public’s list of concerns, it was only when a local sewer got blocked up with the victims’ remains that they even realised they had a serial killer on their hands.

Judging by the name of the series Des (75 on Metacritic; CMORE; Nov 9), this is more of an affectionate portrayal than Thatcher’s! And while you can’t imagine anyone making a series called Ted or Jeff anytime soon, we are increasingly holding these macabre men in high esteem. In Alex Gibney’s documentary Crazy. Not Insane (HBO Nordic; Nov 19), identified by many as the perfect fix for those anxiously awaiting the return of Mindhunter (it will be a long wait), it strongly suggests, with the help of Dr Dorothy Lewis, that there is a serial killer inside all of us. How exciting!

It’s an industry thing
Until The Big Short came along, there weren’t many films or series that really did justice to the Machiavellian machinations of the financial world that first grabbed our imaginations in the 1980s. As much as we hated these champagne-quaffing yuppies and preppies, we secretly wanted to inhabit their world, even if just for one (quickie or) day. But back then, cliche-ridden films like Wall Street and Working Girl failed to cut the mustard. Fast-forward through the next three decades and the corny became plain boring. Even Rogue Trader, the depiction of the collapse of Barings Bank, managed to be dull.

But there is something about new British series Industry (HBO Nordic; Nov 10) that suggests this might be the one. Free of the distraction of stars, but with plenty of input from across the Atlantic – Lena Dunham, the creator of Girls, directs the first episode – it has a similar vibe to This Life, but swapping barristers for bankers.

Also highly recommended this month are Oscar hopeful Mank (Nov 19) and British politics miniseries Roadkill (64; HBO Nordic), not least for the presence of their lead actors Gary Oldman and Hugh Laurie, two Brits with their pick of the roles these days. The former tells the story of the making of Citizen Kane through the eyes of its co-screenwriter Herman J Mankiewicz. With David Fincher directing, this will be a big Oscar contender. Laurie’s turn as a British minister is low-key in comparison, but no less watchable according to the reviews.

Not over the hillbilly yet!
Talking of the Oscars, Glenn Close has gamely dusted herself off after her mauling this year to deliver another strong performance in Hillbilly Elegy (at cinemas Nov 12; on Netflix from Nov 24) with strong support from her bridesmaid, when it comes to never winning a statuette, Amy Adams.

Drama-wise, it’s a mostly kitchen sink affair, and Babyteeth (77; Nov 5) and Herself (76; Nov 26), from Australia and the UK, are of similar ilk. In the former, unsung Little Women sister Eliza Scanlen gets strong support from Ben Mendelsohn, while the latter is directed by Phyllida Lloyd (The Iron Lady, Mama Mia!), so we’re in safe hands.

Completing the film line-up for November are body-swap slasher film Freaky (Nov 12), Kurt Russell returning to beard up again for The Christmas Chronicles: Part 2 (Netflix; Nov 25) and Citation (Netflix; Nov 6) – proof that African directors can make compelling films if given the chance.

Over in TV land, the returning series include Virgin River (S2; Nov 27) and Undercover (S2; Nov 9) on Netflix, and His Dark Materials (S2; Nov 17) and Mr Robot (S4; Nov 1) on HBO Nordic. Space comedy Moonbase 8 (HBO Nordic; Nov 9) looks like a better bet than Avenue 5 or Space Force. The Flight Attendant (HBO Nordic; Nov 26) looks like an oddball, throwing together comedy and stopover throat slashing; Gangs of London (68; CMORE; Nov 10) looks like overrated British fare that so badly wants to be Scorsese but is in fact shite; and Dash & Lily (Netflix; Nov 10) is unbearably twee – particularly as festive feeling is going to be pretty low this year.

Let’s blame the 1980s and settle down to watch Scully take on Scarface. ‘Tis the season to hate, hate, hate.