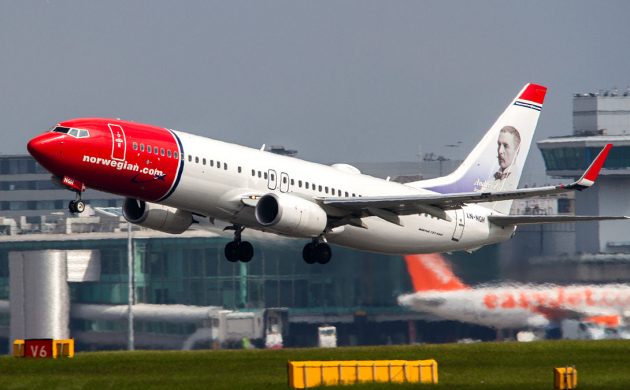 The pandemic hit Norwegian hard, as an airline that made the unlikely shift from low-profile Scandi provider to long-haul pioneer (photo: RHL Images)
November 10th, 2020 4:37 pm| by Luke Roberts

The future of an airline that set out to disrupt and redefine the aviation industry has been thrown into doubt after the Norwegian government refused to provide Norwegian with support beyond that already being handed to the rest of the industry.

As a result, the airline acknowledged bankruptcy as a possibility yesterday, and in a final bid for survival began cutting the few routes still operational. Among them were all routes to Denmark, and also the internal flights between Aalborg and Copenhagen.

“I exclude nothing now”
Bankruptcy, firings and lay-offs all remain on the table according to Jacob Schram, its CEO. Whilst many airlines’ shares made steady progress with news that a vaccine was on the horizon, Norwegian’s continued their downward trajectory in a year in which they have fallen 98 percent.

Yesterday the airline announced that 1,600 more employees were being sent home on furlough and 15 aircraft grounded. Before the pandemic the group had a workforce numbering over 10,000 with a fleet of 140 aircraft – now just six planes continues to fly, supported by a staff of 600.

Picking up the scraps
Competitors have already begun to close in on Norwegian’s most appealing routes. Airline DAT will take over the lost flights between Aalborg and Copenhagen, having already operated on the route since the summer.

Elsewhere, experts expect Ryanair and Wizz Air to plug the gaps left by Norwegian’s European routes, including the valuable landing rights at London Gatwick. For its part, Norwegian continues at this stage to maintain 12 domestic routes in Norway – 11 of which are based in Oslo.