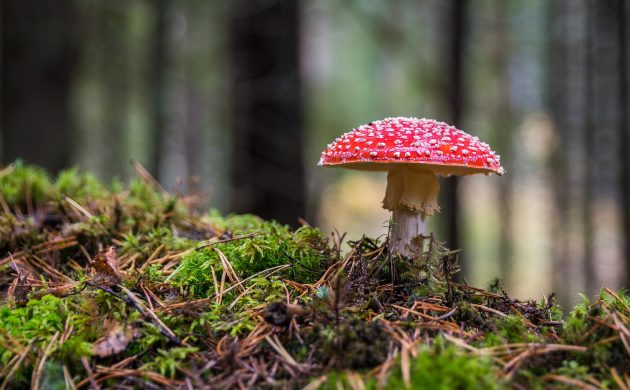 Amanita muscaria, or the Fly Agaric, is known to attract flies, but the revelation that spores can infect insects is a new discovery (photo: ekamelev)
November 20th, 2020 11:46 am| by Helen Jones

It sounds like something straight out of a horror movie, but Danish scientists have confirmed the discovery of two new species of toadstool that can eat a fly from the inside out.

The two new species, Strongwellsea tigrinae and Strongwellsea acerosa, were found in Jægerspris and Amager respectively and may be unique to the biodiversity of Denmark.

Spreading spores through living bodies
The toadstools are able to infect flies that land on them with spores – which eat away at the fly’s body to form a hole in its abdomen.

The fly itself can continue to fly for several days, all the while leaking spores from the hole in its back, which can infect other flies if they come too close. Eventually, the fly will succumb to the spores, but many more flies may become infected during that short space of time.

READ ALSO: Science Round-Up: Birds under the microscope in Copenhagen

A fascinating – if freaky – discovery
“It’s an exciting and remarkable example of the biodiversity to be discovered in the Danish countryside,” commented Jørgen Eilenberg from the institute of plant and environmental research at the University of Copenhagen.

Scientists are still formulating hypotheses on how the flies are able to stay alive for so long after infection. Theories range from the toadstool spores having an amphetamine-like effect on the flies, to suggestions there may be chemicals involved that keep micro-organisms away from the fly’s open wound.

Either theory may open up new and exciting possibilities for potential medicines, so the macabre discovery may yet pave the way for future life-saving drugs and treatments.