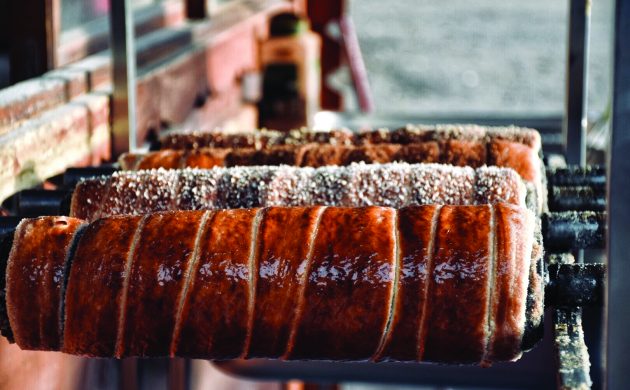 Chimney cake ( kürtőskalács) is a Hungarian spit cake that originates fromTransylvania. In Hungary, they’re usually sold from food trucks at most markets and events (or next to the local Tesco).

“Would you like Nutella with your chimney?” Susy Gál Rødtnes asks as she exits the kitchen of the  Chimney Cake Shop in Ballerup.

Rødtnes is Hungarian. Together with her husband Martin, who she met on Tinder two years after she moved to Denmark, she owns the shop.

You say no to the Nutella and take a bite from the chimney cake. The crispy, caramelised crust crushes under your teeth before they cut through the soft inner layer of pastry.

Meeting of three countries
The couple took part in a chimney cake course in Slovenia and travelled to Prague and Budapest to sample some of the many different types of chimney cakes out there. On social media, Susy and Martin follow other chimney cake shops from around the world to find inspiration for the next new item on the menu.

“What we’re trying to do is to introduce people to the original – the chimney cake known and loved in Hungary – while also offering new and innovative versions of it,” explains Martin.

They fill chimney cakes with ice cream, for example, or make salty chimney cake sandwiches – an innovation very rare in Hungary, if existent at all.

Bite out of Budapest
“Our sandwiches are actually much more popular with the Danes than our classic sweet chimneys,” explains Susy. One of these chimney cake sandwiches is ‘The Budapest’.

“Martin, make a Budapest for our guest,” Susy says to her husband enthusiastically. “It’s the chimney cake version of that classic sandwich they’d serve at your aunt’s birthday party in Hungary. You know, with salami, cheese, egg slices, ketchup and pickles.”

You’re sceptical at first, but the Budapest is a winner: the warm, salty, cheesy pasta might even be better with the toppings (or, in this case, fillings) than the regular bread of the original sandwich.

Past meets present
Susy then tells you they also offer workshops – where you and a group of friends can begin mastering the craft of making chimney cakes – as well as catering services.

When it’s time to go, you take a look around the room. In The Chimney Cake Shop, past meets present, tradition meets innovation and Denmark meets Hungary. And it’s all facilitated by a couple who themselves embody this intersection of cultures.

Entering the vineyard
“When people think about Hungarian wine, they think about Tokaj,” contends Mihály Fekete. “Yes, Tokaj is the crown jewel, but we have 21 other historic wine regions in Hungary.”

Fekete worked as a chef in high-end Hungarian restaurants before moving to Denmark where he is now the head chef at Boulebar Nørregade. Meanwhile, in his free time, he’s been working on engineering a Hungarian wine portal called Wine and Spirit Store.

Vintage in the vault
Fekete is very approachable. He’s happy to talk and eager to teach, and he’ll even invite you into his treasure vault, the stock, which is located “in the cellar of the house where I live with my mom at the moment”. There he’ll open some wine so you can make an informed decision before undertaking an actual investment.

“The storage space is becoming a little tight,” he says. “You’ll also find wine upstairs, on the bookshelves, for example. But, basically in eight out of ten drawers you’ll find some of the wine we’re selling.”

From the 75 kroner Egri Csillag to special editions like the 1975 kroner Balassa Betsek Trilogy – a package including three bottles of wine and three rocks and minerals of the type in which these wines were cultivated (quartz, rhyolite and andesite, respectively) – Fekete aims to offer a diverse selection of wines.

“My goal is to give you the best quality wine for the price range you come with,” he asserts. 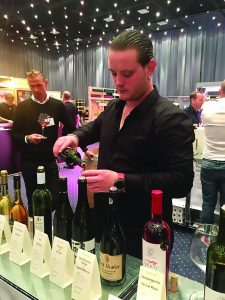 Under-rated players
While he’s doing this partly for profit, Fekete is truly proud of Hungarian wine.

“We are mind-bogglingly underrated. Still today, you sit down in a wine school and they’ll tell you that the French sauternes wines – produced in Bordeaux – are the best sweet wines in the world. A side note: they are very good,” he contends.

“But our similar Tokaji Szamorodni is just as good, only less famous. And above the Szamorodni, we even have another classification called Aszú, which is even better.”

Fekete takes further issue with the Bordeaux region, as history tends to credit the French with creating the first classifications there – in 1855 on the request of Emperor Napoleon III.

“Yet, in 1737, Tokaj had already become the first classified wine region by decree of Charles VI, ruler of the Habsburg Monarchy. Just sayin’,” he adds.

A sailor’s pub?
It looks like a sailor’s pub. The compass logo, the wooden tables and the candles burning on top of them. Sure enough, this pub was founded by a British sailor.

But take a few more steps inside and look a little closer: you begin to discover that these candles burn in Unicum bottles (a Hungarian herbal liquor) and that the old newspaper framed on the wall is from November 1953, when Ferenc Puskás led Hungary to a 6-3 win over England.

You meet the current owner, Balázs Szilágyi. He’s Hungarian. And then you meet several of the bartenders in Kompasset, and you learn that only one of them is not Hungarian.

Hungarian culture
Furthermore, there is a pub quiz every Wednesday night and Balázs often includes questions related to central Europe. When you mention this to him, he goes: “Of course! Of course, look, let the western Europeans learn about it.”

Balázs will also invite Hungarian musicians to his pub and throw special events on Hungarian national holidays. If you catch one of the latter, there will be no shortage of Hungarian company. You’ll meet everybody from chefs to engineers to businessmen to fashion designers.

Standing by the bar, you examine what’s on offer: all kinds of craft beer (including Hungarian, of course), gin, vodka, Unicum, long drinks (like ‘skinny bitch’ and ‘white Russian’) and cider.

A few drinks later, returning to Poul Henningsens Plads, the nearest Metro station, you decide to come to Kompasset on a Tuesday next time – to see the open mic, where random musicians play three songs in hopes of winning a free drink. 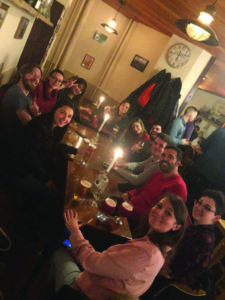 Company of Nomad’s
But where are the Hungarian dishes, you think to yourself. The ones that they eat for lunch or dinner. Fortunately there is Nomad at Valby Langgade 25.

“This whole thing actually started at a party, when Zoli, my business partner, said to me: ‘There should really be a Hungarian restaurant here. We’re really missing one.’ I just looked at him and replied: ‘Okay, let’s do it,’” explained Imre Lengyel, the head chef at Nomad, who worked as a chef in Hungary for 30 years before moving to Denmark 12 years ago.

Indeed, there has not been a Hungarian restaurant in Copenhagen since Hungaria closed its doors years ago.

All the classics
“So what we have here is classic Hungarian food,” adds Lengyel’s business partner Zoltán Karpf, who used to run a small grocery shop in Debrecen. A glance at the menu reveals dishes like ‘beef loin with pasta’, ‘fake goulash’ and ‘sponge cake ala Somló’.

Nomad also strives to take things in new directions: every day there is a new menu and, starting this week, they’ll also include a fitness option in each one. These are all on their Facebook page – @Nomadfoodcph – or their brand new website nomadfood.dk.

And pizza too!
And then there is the pizza. Though they don’t claim pizza is a Hungarian invention (although, you never know), it’s a special recipe.”

“No, I’m not gonna reveal it now,” Lengyel tells you with a laugh. “But I use a very healthy kind of flour that is low on gluten. It tastes great – so far, everybody loved it.” 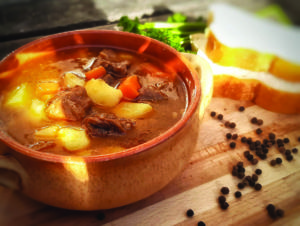 Soul-warming stew
As the conversation comes to an end, your stomach begins to grumble and you’re now sure you’re hungry. So you sit down to enjoy a steaming hot stew while you watch people cut through the winter cold in large coats and heavy boots.

The warm pork crumbles in your mouth as you dip a piece of potato in its brownish sauce. Staring out that window, you think to yourself: “Huh. That’s Denmark out there, yes, but this, this is Hungary.”