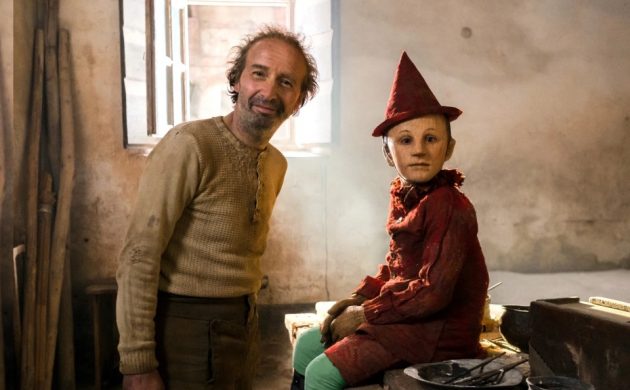 The IKEA instructions forgot to include how you can make the woody runt bastard likeable
December 10th, 2020 7:00 pm| by Ben Hamilton

Disney films had a mythical status growing up thanks to their cynical re-release strategy. Even Halley’s Comet, which buzzed by when I was 13, was more frequent. I contest the irrefutable evidence that Mumsy took me to see Snow White when I was ten (Google says so, but it must be a North American re-release), but remember well how my older brothers were clearly well versed in the likes of Pinocchio (Not Released Worldwide; at cinemas Dec 25) and other classics that I would never see until I got Chinese pirated copies years later.

The version of Pinocchio that put me off the woody little bastard runt for life was a BBC series released in 1978 – memories of which have haunted me ever since. The Daily Motion website tells me it is “macabre” and made by legendary Doctor Who producer Barry Letts. Cue Michael Caine at his most throaty: I was only five years old.

Cannonball ball runs
So, I’ll be giving the Roberto Begnini version a wide berth this Christmas, and cinema in general, thanks to sparse offerings that make Bob Scratchit’s annual offering look like Harry Potter’s gluttonous chums have just won the Hobnobs Cup.

Even worse, The Cannonball Run (28; Jan 1) is this country’s only New Year’s Day movie, while almost all the other festive releases are deja vu fodder: from the frequently postponed Wonder Woman 1984 (NRW; Dec 17) and Promising Young Woman (74; Jan 7), to oldies like Bong Joon-ho’s 2005 classic Memories of Murder (82; Dec 17).

The only film I’m genuinely interested in seeing at the cinema is the French-language effort Persian Lessons (NRW; Jan 7). Directed by Vadim Perelman (House of Sand and Fog), it’s a Holocaust survival story-line laced in black humour that is reminiscent of Agnieszka Holland’s superb Europa Europa. Boiled down, the protagonist survives the death camp because he is giving the kommandant lessons in Farsi – a language he’s completely clueless about.

Also promising are Sound of Metal (82; Dec 10 – also available via Amazon Prime) and The Midnight Sky (NRW; Dec 10 – on Netflix from Dec 23). The former stars Riz Ahmed as a drummer who loses his hearing, and there is some Oscar buzz (or should that be tinnitus) regarding his performance. The latter brings us George Clooney in an apocalyptic tale about a radar controller who must brave the wilds of the Arctic to warn returning astronauts that humanity’s done its best to destroy itself.

The same could be said of the rest of the round-up. Honest Thief (46; Dec 3) is another thriller starring Liam ‘I’ve cornered this market by threatening to kill all my peers’ Neeson; The War with Grandpa (34; Dec 17) is another sacrilegious waste of talent, not least because Gramps (Robert DeNiro) is joined by Deerhunter co-star Christopher Walken (we blame Joe Pesci for starring in Home Alone); Infamous (NRW; Jan 7) is a modern but hackneyed retelling of the Bonnie and Clyde story starring Bella Thorne; while Mortal Kombat (NRW; Jan 14) is a title that has already spawned so much disappointment, you wonder when they’ll get the message that nobody cares.

Bottoms up, Chadwick
The same could be said of all the festive films recently released on Netflix, but fortunately this month they’re giving us some proper reasons to look forward to Christmas. As well as Mank (80; Dec 4) and The Midnight Sky, we’ve got the musically-inclined The Prom (55; Dec 11) and Ma Rainey’s Black Bottom (88; Dec 18).

In Ma Rainey, we have the frontrunners in the main Oscar acting categories: Viola Davis as the title character and the late Chadwick Boseman as the antagonist in what looks to be a superbly realised 1920s creation. It’s particularly poignant as this was Boseman’s last ever performance, and critics have fallen over one another in a bid to read more into his final lines.

The Prom is a cheesier affair, albeit with ‘A list’ duo Meryl Streep and Nicole Kidman, and James Corden, along for the ride, but you’d be better advised choosing the other Streep option, Let them all talk (72; Dec 10 on HBO Nordic), a Steven Soderbergh movie that is mostly improvised.

Walt’s back, kind of
Series-wise, HBO Nordic has more clout than Netflix this month, with the thriller miniseries Your Honor (Dec 7), starring Brian Cranston in another frantic role, looking like a safe bet to warm up your winter evenings, while Euphoria (S2; Dec 7) has heat of a different kind.

The equally saucy Normal People (82; Dec 16), Raised by Wolves (64; Dec 27) and The New Pope (S3; Dec 10) have been doing the rounds for a while, which is apt as The Stand (Dec 17), yet another Stephen King adaptation, will make you dizzy if the trailer is anything to go by.

Over on CMore, the miniseries Quiz (75; Dec 7) with Matthew Macfadyen spot on as the coughing major who cheated on Who Wants to be a Millionaire, is a riot, femme fatale fare Reprisal (53; Dec 1) badly needs to call a friend, and romcom slog The Baker and the Beauty (Jan 5) won’t be asking much of its audience.

This all leaves us with the 50-50 looking British period drama Bridgerton (Dec 25 on Netflix), and if you can look past the absurdly diverse cast, it might even make you forget the shoddy excuse for a Christmas the movie industry is doing its best to exacerbate.