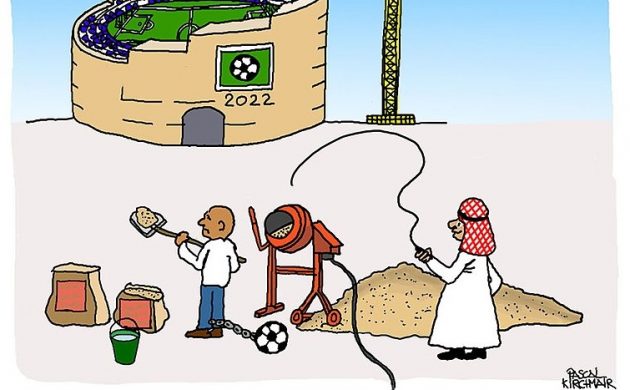 An artist’s impression of the stadium for the final once completed (photo: Jacquelinekato)
January 7th, 2021 6:30 pm| by Ben Hamilton

Denmark landed its easiest ever World Cup qualifying group in December when it drew Austria, Scotland, Israel, the Faroe Islands and Moldova, but now a new opponent has reared its head – from within.

Over 5,300 Danes have already signed a citizens’ proposal to boycott the tournament in the late autumn of next year on the grounds of the human rights record of the host Qatar.

But while the petition will need 50,000 signatures in order to be submitted for a vote in Parliament, some football fans will already be groaning in their klaphats – albeit a little prematurely given that a ball hasn’t even been kicked yet!

MPs to debate matter next week
On January 12, it has been confirmed that Parliament will debate the matter.

Left-wing party SF is expected to lead the charge during a consultation with the culture minister, Joy Mogensen,

It is expected that some MPs will argue that the DBU football federation and government try to find allies abroad in their bid to put pressure on Qatar and FIFA.

No Ballon d’Or from France Football
The world’s media are taking note, with outlets in Scandinavia, the UK and other parts of Europe reporting the news.

Meanwhile, Casper Fischer Raavig, one of the organisers of the petition, has told tipsbladet.dk the interest from abroad has exceeded expectations.

Coronavirus-permitting, the 2022 World Cup is scheduled to start next year on November  21 – providing, of course, the Danes do not persuade the rest of the world to boycott it.

Denmark also opposed to Belarus co-hosting ice hockey worlds
The Danish Ice Hockey Union opposes plans for Belarus to co-host the sport’s world championships with Latvia in May. The world governing body has not yet made a decision on whether Belarus can go ahead in light of the controversial nature of the victory of President Alexander Lukashenko, a huge ice hockey fan, in the country’s general election last year. Fellow Nordic nations Sweden, Finland and Norway reportedly back Denmark’s stance, while the Danish union fears that most of its NHL stars will simply opt out. The championships are due to start on May 21.

Cycling quartet win Denmark’s answer to Sports Personality of the Year
The 4,000-metre pursuit track cycling team, who smashed the world record three times on their way to winning the world championship last February, have been named the Danish Sports Person of the Year – an award annually handed out by DIF and Team Denmark. The team consisted of Rasmus Lund, Julius Johansen, Frederik Rodenberg and Lasse Norman Hansen, who won Olympic gold in the omnium in 2012. Badminton player Viktor Axelsen, who won the award for the year’s greatest sporting achievement for winning the All England Open championship, was shortlisted for the top award along with footballer Pernille Harder.

Rowing duo inducted into prestigious hall of fame
Denmark’s 2012 Olympic gold medal-winning rowing duo Mads Rasmussen and Rasmus Quist have been inducted into Sportens Hall of Fame by DIF and Team Denmark. They join Eskild Ebbesen, the key member of the legendary Guldfireren (golden four), as the only rowers in the esteemed company. Rasmussen and Quist, who also won world championship golds in 2006 and 2007 before finishing third at the 2008 Olympics, retired in 2016.

Bumper contract for Bjorkstrand at Blue Jackets
Ice hockey player Oliver Bjorkstrand, 25, has agreed a new 164 million kroner deal with Columbus Blue Jackets that will keep him at the NHL club until the end of the 2025-26 season. Bjorkstrand has notched up 65 goals and 68 assists in 246 games for the Blue Jackets since making his debut in the 2015-16 season.

Freediver smashes descent record with 200-metre plunge
Danish freediver Stig Severinsen, 47, has smashed the world record for the furthest successful descent into water on one mouthful of air. His mark of 202 metres off the coast of Mexico beat the previous record of 177, which was set in 2016. Severinsen can hold his breath underwater for over 20 minutes, which is also a record.

Dane who played under Klopp at Mainz 05 takes over as coach
Bo Svensson, 41, has been named the new head coach of Mainz 05, the Bundesliga club that Jürgen Klopp managed for eight years before joining Borussia Dortmund in 2008. Svensson, who previously managed Austrian second tier side FC Liefering, played under Klopp after signing in 2007. Mainz 05 currently sit 17th in the Bundesliga table.

Kasper snatches Dad’s record
Kasper Schmeichel, 34, has now played more games for Leicester City than his father Peter did for Manchester United – the Danish record for a goalkeeper at a single club in Denmark. The landmark also leaves him just a game away from completing 400 starts for the Foxes. However, Peter retains the Premier League record, as Kasper’s first three seasons at Leicester were in the Championship.

Eriksen tipped for another January move – PSG among the chasing pack
Christian Eriksen has been linked with moves to former clubs Ajax and Tottenham, as well as Paris Saint-Germain, should he leave Italian giants Inter this month. It would bring an end to an unhappy year following his move from Tottenham last January.

Another Dane joins Atalanta
Right back Joakim Mæhle, 23, has left Genk to sign for Serie A club Atalanta where he can look forward to a Champions League knockout game against Real Madrid this spring. In 130 matches for Genk, Mæhle scored six goals and delivered 22 assists. National team-mate Andreas Cornelius plays for Atalanta, but is currently on loan at Parma.

Danish influence at Charlton apparent
English League 1 club Charlton Athletic has snapped up 31-year-old Danish striker Ronnie Schwartz from FC Midtjylland. The southeast London club, which was recently bought by Danish businessman Thomas Sandgaard, is hoping to return to the Championship following relegation last season. It is currently sixth in the table.

Swapping the Superliga for Slavia
SønderjyskE right back Alexander Bah, 23, has moved to Slavia Prague for an undisclosed fee rumoured to be 13 million kroner. SønderjyskE has confirmed the move has broken its transfer record. Bah, who has Europa League knockout football to look forward to, has agreed a four-year contract.

Astralis back on top of the world
Danish Counter-Strike team Astralis is again number one in the world following its triumph at the IEM Global Challenge, which saw it overtake French rival Team Vitality. Astralis also scooped up 1.2 million kroner.