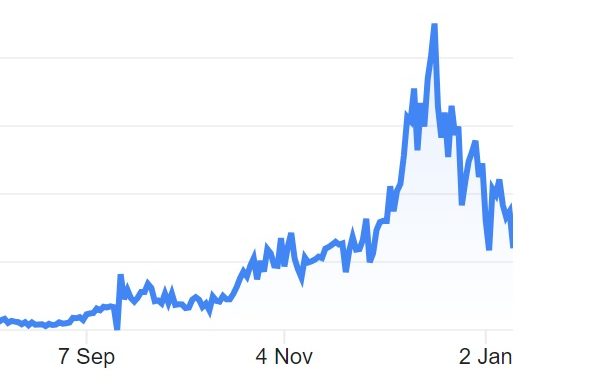 There has been no upsurge in the daily infection figure today, like the ones that followed the nadirs seen on December 22 and 26, and then January 3 (screenshot)
January 11th, 2021 6:18 pm| by Ben Hamilton

PM Mette Frederiksen may have yesterday conceded that the easing of COVID-19 restrictions won’t occur for some time yet, but today’s infection figures have delivered fresh optimism.

Some 1,239 new cases of COVID-19 have been registered in the 24 hours up until early Monday afternoon.

This is good news as it continues a downward trajectory in cases since daily figures peaked at 4,508 on December 18.

No blip this time
But perhaps more significant are the findings when the results are compared to the same time last week.

Today’s figure is seven fewer than the 1,246 registered infections just after Sunday lunchtime.

Exactly a week ago, numbers almost doubled over the same time period, repeating a pattern seen after previous Sundays and national holidays, when numbers crashed only to soar again on the working days that followed.

Is Denmark winning at last?
Today’s figure, above any result of the last three weeks, provides evidence that Denmark’s lockdown might be winning the battle against COVID-19.

Should the trend continue, it offers hope the current lockdown might be eased well before the late-February forecast doing the rounds since Frederiksen’s concession.

But in line with what the health minister, Magnus Heunicke, said on Friday, a lot will depend on how well Denmark deals with the British variant, which at the end of Week 1 accounted for 2.3 percent of all cases nationwide.

27 more deaths
The latest figures also confirmed that a further 27 people have died and 45 have been hospitalised – taking the tally to 920, of whom 138 are in intensive care with 88 on respirators.

Denmark has carried out 11.4 million tests in total, making it just one of four of the 100 most infected countries in the world to have a test rate above 1.0 per person.