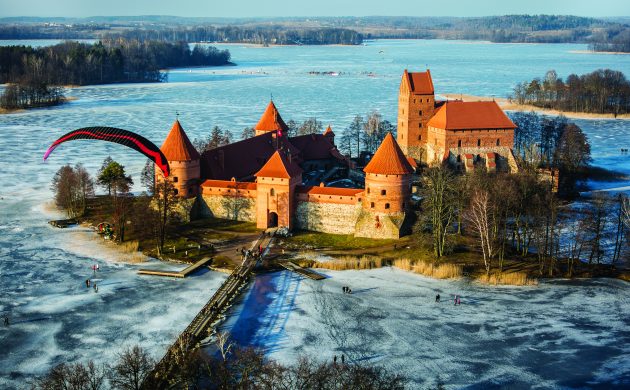 Lithuania and Denmark have many things in common – not least geographically. Located in northern Europe just 900 km apart, they both have significant Baltic shorelines.

Politically, both have strongly democratic, pro-business governments that are open to foreign investment and attracting international workers, whilst quick to condemn abuses of power.

For example, the Lithuanian foregin minister, Gabrielius Landsbergis – who is in fact the grandson of Vytautas Landsbergis, the head of the independence movement and then head of state from 1990 to 1992 – was particularly vocal in his condemnation of Belarus.

They are both members of the EU, NATO and the Organisation for Economic Co-operation and Development.

Both countries are very much open for business!

For Danish exporters, Baltic markets have long held an advantage: they have good infrastructure, a large production capacity, low salary levels, and easy access to a well-educated workforce.

And most crucially, and this is where they really stand out from the likes of China, Lithuania is geographically close and culturally similar.

It’s no surprise to note that Denmark is among the top five leading investors in Lithuania, and that there are over 200 companies with Danish capital registered in the country.

Long road to freedom
All of this didn’t happen in a day, of course. This special edition may mark the 100th anniversary of diplomatic relations between the countries, but for almost five decades Lithuania was part of the Soviet Union.

When the Lithuanians joined their first ever UN peacekeeping mission, it was the Danes who showed the most welcoming hand, offering help where it was needed.

Their troops have since then co-operated in Iraq and Afghanistan, as well as through their NATO commitments.

And when Lithuania applied to join the EU and NATO, which it eventually did in 2004, Denmark was quick to provide assistance

The honorary Nordic
Seventeen years later, Lithuania’s government and parliament wouldn’t look out of place in the Nordics.

Its foreign policy is proactive and it operates a fragmented multi-party system, so like Denmark most of its governments are coalitions.

Also like Denmark, its prime minister Ingrida Šimonytė is female, and so is pretty much half its cabinet (6 of 13) and also the speaker of its Parliament, Viktorija Čmilytė-Nielsen – a chess master (and former European champion) married to a Danish chess master, no less. In fact, its commitment to equality has always been strong, as in 1918 it became one of the first countries to give women the vote.

Equally strong was its quest for independence from the Soviets. As the first of its states to break away, it was subjected to a 74-day economic blockade, but if the Soviets thought a few months of no heating or hot water was going to break their resolve, they were mistaken.

Centre of everything
Regionally, Lithuania actively co-operates with its fellow northern European and Baltic states.

It was a founding member of the Baltic Council in 1993, as well as the Baltic Development Forum, and it also co-operates with its neighbours and the nearby Nordic states through the NB8 and NB6 (for EU members only).

Further afield, it has served as a member of the United Nations Security Council.

As a side-note to its inclusiveness, did you know that the true geographic centre of Europe is in Lithuania, just 26 km north of its capital Vilnius.

At the heart of Europe … watch this space.

It’s crazy to think that Lithuania once stretched from the Baltic (although it only had a miniscule coastline back then!) to the Black Sea, and that the likes of Minsk and Kiev played second fiddle to Vilnius, but for 300-odd years up until 1569 that was the case with the Grand Duchy of Lithuania.

Forget the superpowers of Spain, France and England, it was the biggest state in Europe. Filling the vacuum left by the collapse of the Mongol Empire, it included modern-day Lithuania, Belarus and Latvia, as well as parts of  Estonia, Moldova, Poland, Russia and Ukraine.

From Trakai Island Castle, the grand duke reigned over his lands, exercising prudent power and religious tolerance, but when Lithuania needed to fight, it did, famously together with Poland seeing off the Grand Duchy of Moscow in 1514.

And unlike the Mongols, it did not end badly. It saw off numerous religious crusades and invasion threats to eventually merge its domain into the Polish-Lithuanian Commonwealth – a kingdom that remained intact until the invasion of Russia in the 1790s.