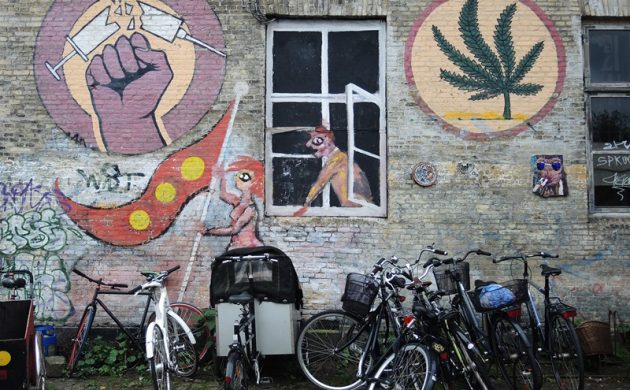 Christoffer Badse, the head of the Danish Institute for Human Rights, has accused the government of abusing its power with the continuance of its residence ban in Christiania, which Copenhagen Police continues to maintain is necessary to curb the spread of the coronavirus.

Since January 7, it has been illegal to loiter in the areas known as Pusher Street and the Green Light District, and Badse contends the government should not be using extraordinary powers to fight crime – in this case the sale of cannabis.

“The intention is to fight epidemics and not fight crime. It is important that the right legislation is in place. In principle, the fight against crime could be a legitimate consideration, but not when the justification is to fight corona,” Badse told DR.

Police insist they are justified
Copenhagen Police, which recently charged 25 people with continuing to sell cannabis in Christiania despite the ban, insists the residence ban is in place to only fight corona.

“We have been able to establish that the two areas in Christiania attracted many people and that the assembly ban in the area was not being complied with, and therefore we assessed that a residence ban was necessary to prevent infection with COVID-19,” Copenhagen Police police inspector Tommy Laursen told DR.

“We tried for a long time to communicate with the segment in the two areas to avoid a residence ban – unfortunately without success. The residence ban is only a tool we use to minimise the risk of infection in an area. We have completely different and more effective tools to combat the organised cannabis trade.”

Laursen concluded that police work in Christiania was an unfortunate drain of staff – a view shared by many pro-legalisation politicians at Copenhagen City Hall, who despair at the waste of resources at the expense of fighting crimes such as burglaries, which are rarely properly investigated.

Other residence bans very temporary
Residence bans have also been introduced in areas such as Kødbyen, Islands Brygge and the odd park in Nørrebro, but only for short periods.

Right now, the Christiania residence ban is the only one of its kind across the entire country.

There are certainly no alarming infection rates justifying the ban. With 104.7 cases per 100,000 inhabitants, Copenhagen has the 19th highest rate in Denmark.

An estimated 8,500 cannabis trades were carried between January 21 and March 4, according to Copenhagen Police.